After missing Olympics, Duke Ragan has something to prove as a pro 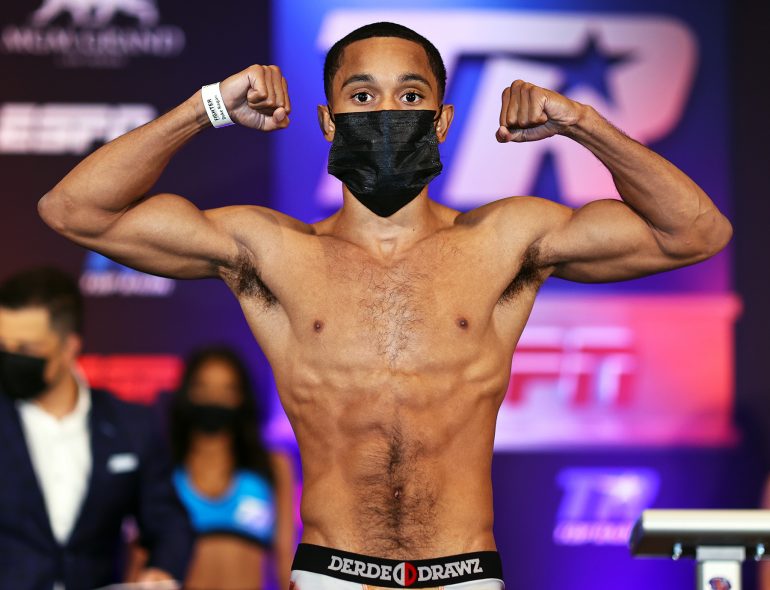 There wasn’t a single competitor who entered the 2020 U.S. Olympic boxing trials with the name recognition that Duke Ragan brought to Lake Charles, Louisiana. Ragan, who earned silver at the 2017 World Championships and 2017 Pan American Games, was the top seed entering the tournament.

The degree to which he was held in high esteem made it even more surprising when Ragan found himself out after losing 3-2 decisions to Bruce Carrington and David Navarro in the 57-kilogram (125 pounds) division.

“When I came up short it was devastating,” said Ragan, 22, of Cincinnati. He took a couple of months off before getting back into the gym, hoping for a call while on the Olympic wait list. When that call didn’t come, he conferred with his manager James Prince and the rest of his team. It was time to turn professional, they decided collaboratively.

That first step begins Saturday when Ragan make his pro debut, facing Luis Alvarado (1-1) in his pro debut on the Eleider Alvarez vs. Joe Smith Jr. card, which will be shown live on ESPN+ from “The Bubble” at the MGM Grand in Las Vegas. For Ragan, turning pro will give him the opportunity to chase a world championship as a pro, which had been something he’d dreamed of since he was a child, when he convinced his father to allow him try boxing, just like his older brother Lewis Walker.

“Don’t get me wrong, I wanted to be an Olympic gold medalist growing up as a kid, I always wanted to be like [three-time Olympian] Rau’shee Warren, but also I wanted to be a world champion as well,” said Ragan, who weighed in at 125.5 pounds, while Alvarado weighed 126.8 for their four round bout. 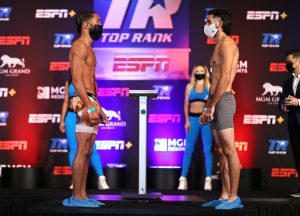 Ragan and Alvarado face-off on the scales. Photo by Mikey Williams/Top Rank

“Every time I was training with great fighters they were always like ‘You’ll be a world champion one day.’ That was extra motivation to turn professional.”

Top Rank Vice President Carl Moretti says the elite amateurs are always on their scouting radar, and expects Ragan’s skill to translate to the professional ranks. Still he’s cautious to compare his style and ability to any other predecessors, and wants to see how Ragan defines himself in the ring.

“You know he’s talented, you know the amateur pedigree is there, training camp, conditioning, all of that is there. But you’d have to see five fights before you make those kinds of comparisons, or what kind of level he is, or how long it might take to get to that next level,” said Moretti.

“There’s no reason why he couldn’t be moved pretty fast because that’s what you want to see.”

There’s no questioning Ragan’s commitment to boxing. In 2017, prior to the Chemistry Cup, Ragan was training with the USA Boxing team out of town and had to watch his daughter’s birth over FaceTime. He returned home for a week to bond with his daughter before heading back to camp and then defeating a Russian opponent to bring home the team’s only gold medal of the tournament.

(RELATED: After beating COVID-19, Julian Rodriguez says he is ready for prime time)

Since 2017, Ragan has been training with Kay Koroma, who also trains his former amateur opponent Shakur Stevenson, out in Houston. This camp has been different from previous ones, as he works on making adjustments to the longer pro fights, and the premium placed on power punching and entertainment.

“I’ve really been cracking down on the mistakes I was making in the amateurs and in practice,” said Ragan. “A lot of my practices have been focusing on technique, placing punches, sitting on punches. In the amateurs a lot of things you just do off of speed, but now I’ve got to put the power with it and not rush things because you get a little bit more time so.”

Ragan admits he had been “on a pedestal” prior to the Olympic trials, and says he has something to prove as a pro, beginning with Saturday.