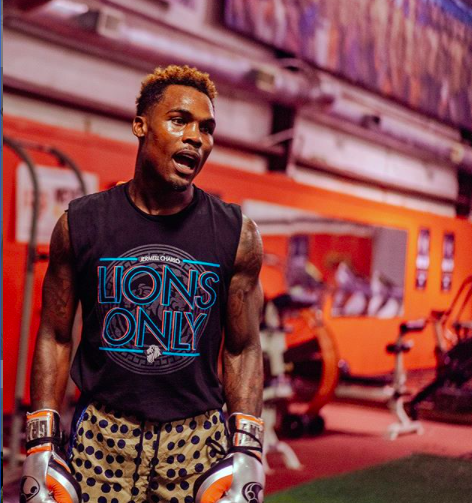 Jermell has been a little edgy in this lead up, we heard it when he was lobbying to get the main event slot on the PPV. We heard it more on IG Monday...
17
Aug
by Michael Woods

Fans and media alike have wised up over the years, and so many of us, when we see a kerfuffle like the one supplied by Jermell Charlo on his Instagram on Monday, we often automatically wonder if our buttons are being pushed.

Maybe you missed it…

If not, here’s a synopsis.

Basically, the 154 pound twin started ranting, and he directed his harsh words not at the man he’ll be fighting on Sept. 26, Jeison Rosario, but at his twin brother, Jermall, who fights at 160 pounds. Jermell Charlo (33-1; lone loss to Tony Harrison) will top a PPV show, which will unfold at Mohegan Sun in Uncasville, CT, produced by the Showtime crew. He will fight IBF and WBA titlist Rosario (20-1-1; from Dominican Republic) and seek to defend the WBC 154 pound crown.

Jermall (30-0) will fight on the PPV his stiffest on paper test to date, Sergiy Derevyanchenko (13-2, from Ukraine). The twins had gone back and forth a bit on who would be given the main event slot, and Jermell had lobbied for it. Politely, as compared to his conduct on IG Live.

He said that posts showing off how nice your house is don’t make you all that, using spicier language.

Jermell declared that HE is the CEO of their promotional company, Lions Only, and boasted that he would be main eventing Sept. 26. “I’m not effing calming down, and do what ya’ll effers tell me to do,” Jermell continued. “This is me and me forever! And I ain’t never changing me.”

He will act the same way, he said, when he’s done with boxing. “Ya’ll stay out my way, I’ma be at the fights tellin’ ya’ll wassup!”

He told watchers that his record, of 33-1, should be heavily respected. “I’m strapped up too n***a, so if ya partners come up here playing with me I’ma smack the fuck outta ‘em,” he said, seemingly aiming the warning at undefined “haters.”

That right there, talking about being “strapped up,” that sounds like a reference to packing a firearm, so yes, Jermell rang bells with this tirade. Then again, he’s not been afraid to advertise his fondness for guns, so maybe gun-talk doesn’t ring as many bells as I’d think.

He even admitted that he’s done “some stupid s**,” but has persevered, and is still in the mix.

It appeared that Jermall then typed in to say hello, and Jermell kept on throwing verbal darts at Jermall.

“I was coming up in the game with De La Hoya, you fought some of the n***as I had already beat. What you talkin’ bout? You fought Deon Nash twice, I beat him first!…I’ma let ya’ll keep running around talkin’ this ‘Lil’ Charlo’ s**t….You mean 154? You mean the king of 154?” He then recommended Jermall’s squeeze not weigh in, and signed off with a mean adios.

Yes, the Texas twins have been making the rounds, to hype their PPV. You may enjoy both of them talking to Brian Custer, on his podcast. Yeah, Custer does a rock solid job touching on subjects that others back away from.

He asked the twins about PED chatter. “Anybody who cheats especially in this sport actually needs to be indicted as well as kicked out of boxing for the rest of their life,” Jermell told Custer. “Me and my brother have never done drugs or cheated!”

OK, back to Monday….Did Jermall fire back, with his own IG hit? Did he do revenge promo on his brother?

No; he did a phone hit with Ak and Barak, on SiriusXM. The show runs on the satellite radio net daily and also on the DAZN app, and you can hear the entire back and forth with Jermall on Thursday.

Jermall did indeed speak on Jermell, but kept it light work.

And about his forthcoming test, he said, “I’m no GGG so Derevyanchenko is in for a long night.  You could tell there was something wrong with GGG when he fought Derevyanchenko. Derevyanchenko didn’t get the W vs. GGG so at the end of the day it’s just sour grapes if he were to complain about that decision.”

Ak said he liked seeing social media content which conveys what sort of family man Jermall is, and Mall answered that, “Fatherhood means the world to me. I have five beautiful kids and they’re my best friends.”

Jermall letting fans know some of what he’s all about.

There are other good tidbits in the session. Jermall talks some about why Ronnie Shields fits him well, and also about back when Jermell was aligned with Shelly Finkel, and James Prince may or may not have become involved.

More topics—will 160 Charlo soon go to 168? Does Jermall want to fight Canelo, or is he not into chasing big game?

Ak eventually brought up the Jermell rant. “I love my brother and he’ll always be my brother. We have two separate teams we don’t always see eye-to-eye.  God gave us the ability to be able to agree or disagree..Everything is good, don’t worry about it,” Jermall asserted.

Barak asked who is “the mean one,” the more aggressive twin. “We’re both aggressive, both alpha males,” he said.

“We’ll always be like this forever – it’s my twin brother, we don’t always see eye to eye,” he said, admitting he didn’t want to traffic in the messy stuff. They grew up fighting, he said, chuckling, and sometimes brothers do fight.

All in all, Jermall basically said it’s no biggie, they sometimes have spats, but they move past it.

Listening to both sessions, I have to agree. That Jermell rant will draw buzz, but no, I don’t this is anything more than some regular twin sparring, with maybe some (subconscious?) effort to get ink. Guess what? That worked.