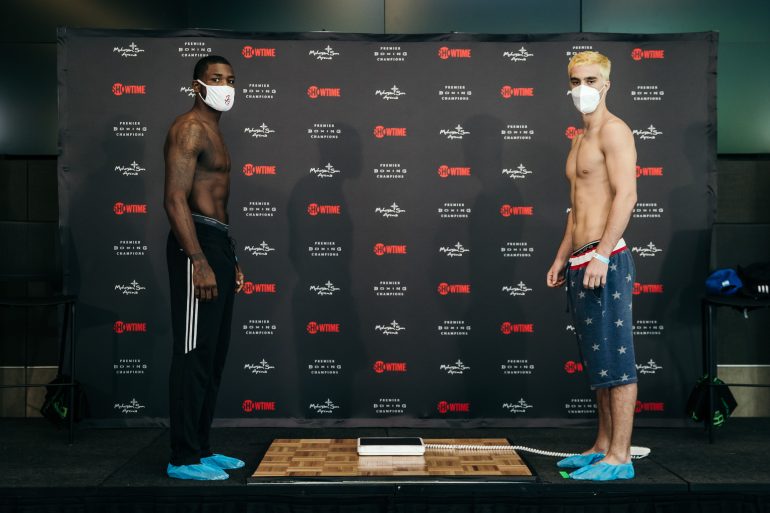 Light heavyweight Joe George was dominated for much of his scheduled 10-round rematch with Marcos Escudero on Saturday before he knocked out Escudero cold with a vicious left uppercut in the ninth round.

At the time of the knockout, judge Tom Carusone somehow had it 79-73 for George, while Don Trella scored it 79-73 for Escudero, and Steve Weisfeld had it a little closer with Escudero up 77-75.

The bout was the first of a three-bout Showtime-televised card at the Mohegan Sun Arena in Uncasville, Connecticut.

On November 15, 2019, George escaped with a highly-controversial split decision over Escudero, who a significant portion of ringside observers felt had won clearly.

While George left the judges out of the equation this time around, it was no walk in the park for the 31-year-old.

George was aggressive in the opening round, connecting with a left hook to the head. He also split Escudero’s guard with the jab and went downstairs with a left uppercut to the body.

Joe George KOs Marcos Escudero with a massive uppercut in Round 9. pic.twitter.com/dVdWogdfwe

Both fighters had their moments in the second round on the inside. George landed a series of lefts and rights to the body. But Escudero fired back with a left hook to the body, which seemed to bother George, whose offensive output dropped.

George said before the fight that he would stay off the ropes. While he was successful in the opening frame, the second round was definitely a struggle. With about a minute left in the second, Escudero trapped him against the ropes and unloaded a plethora of body combinations on George, who wasn’t firing back.

George landed a solid left hook to the head in the third round. Escudero continued to come forward and looked to take the air out of George with a left hook to the body. George closed the round strong, knocking Escudero’s head back with a stiff jab.

The fourth round was all Escudero, who punished George to the body throughout the round.

George came out firing in the fifth round with two left hooks to the body. Escudero obliged and continued to reduce George’s work rate with yet another body attack. He moved George into the ropes and connected with a double left hook to the body, and followed up with the same shot upstairs.

George was plagued again in the sixth round by sporadic offense and mediocre defense. Escudero buzzed him halfway into the round with a left hook to the head. George had some success making Escudero miss, but his lack of offense proved to be detrimental.

Escudero’s aggression was ineffective at times, but it was more impactful than George’s lack of aggression. Escudero continued to walk down his opponent with a solid body attack. By the end of the round, George’s legs looked unsteady, and his right cheek had swollen significantly.

George had a better eighth round as Escudero got reckless by dropping his left hand with stunning regularity.

That turned out to be a fatal decision for Escudero.

In the ninth round, Escudero missed with a big right hand, and George capitalized with a counter left uppercut that dropped Escudero flat on his back.

George, of Houston, Texas, improved to 12-0 with eight knockouts. Escudero, a 27-year-old from Argentina, was only knocked down for the second time in his pro career but dropped to 10-2 with nine knockouts.