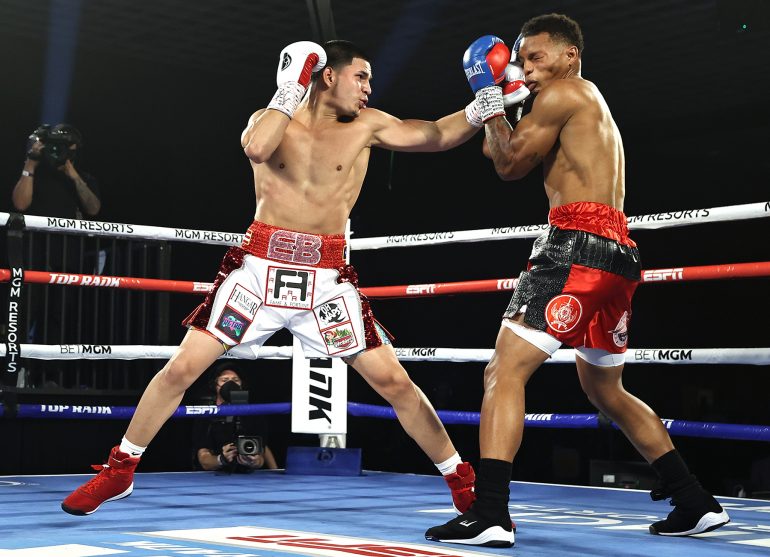 Berlanga had not fought since knocking out Spain’s Cesar Nunez in the opening round on December 14 in New York City.

On paper, Moon was considered to be a modest challenge, one where Berlanga was hoping to get rounds. Berlanga understood Moon was not one to be overlooked.

“It was a step-up fight,” said Berlanga after the fight. “We were in the Olympic trials together. I was ready for this fight.”

Moon came out at the opening bell with the intent of taking the fight to Brelanga. He was able to hang in the pocket, but Berlanga’s punching power began to take its toll.

Berlanga backed Moon in a corner, where he ripped a left-right combination to the body, followed up with right cross to the head. Berlanga followed up with another right cross that landed to the chin of Moon, dropping him to the canvas. Moon struggled to get up, prompting referee Kenny Bayless to immediately stop the fight at 1:02.

Berlanga did tell The Ring in a pre-fight interview that he is comfortable for now as a super middleweight, where he is confident he can build a solid resume. Berlanga believes he can overcome challenges before a shot at a world title fight.

“I’m looking forward to a (world) title, (but) I still want to grow,” said Berlanga, who is trained by Andre Rozier and managed by Keith Connelly. “There are still a lot of challenges at 168 pounds that I need to go through before I challenge for a world title.”