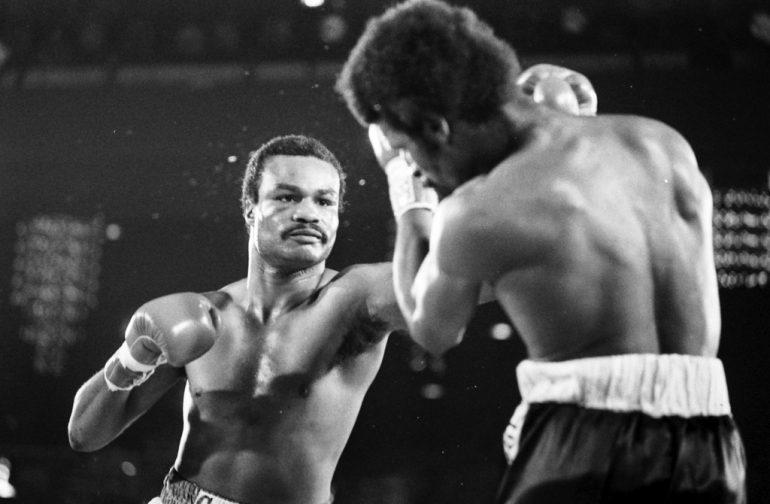 Mustafa Muhammad in action against Michael Spinks. Photo from The Ring archive
21
Jul
by Anson Wainwright

The heavy-handed Eddie Mustafa Muhammad won a world title in the talent-rich light heavyweight division in the early 1980s. In retirement, he would establish himself as a world-class trainer.

Mustafa Muhammad was born Edward Lee Gregory in Brooklyn, New York on April 30, 1952. He would change his name after converting to the Islamic faith. The middle child of five, Mustafa Muhammad’s mother worked as a nurse and his father was in law enforcement.

He had a good upbringing in difficult circumstances.

“It was rough; a lot of killings, I saw a lot of it happening,” Mustafa Muhammad told The Ring. “Brownsville was home of Murder Incorporate, that’s where all the gangsters hung out on Livonia and Saratoga Avenue in Brownsville. That was their headquarters.”

The future champion successfully stayed away from trouble but was eventually involved in an altercation.

“I had a fight in the street one day,” Mustafa Muhammad recalled. “A boxing trainer, Clinton Patrick, saw me and said I could make money if I applied myself. It sounded good to me, so I took him up on it.

“Boxing kept me away from all of that, it was something I wanted to do… become a world champion.”

The young boxer traveled from his home, by bus, to Coney Island where he would graduate from high school, and later on he worked at Mays department store.

All the while, Mustafa Muhammad was developing as an amateur. He won the New York Golden Gloves in 1971 and 1972 and was the U.S alternate for the 1972 Olympic Games in Munich.

But the talented youngster wanted to turn professional, and after going roughly 55-5 in the amateur ranks, he made his debut in September 1972.

“It was perfect, that’s what I liked,” Mustafa Muhammad said of his transition into the professional ranks. “It gave me time to think about what I had to do [to win a fight].”

Mustafa Muhammad won his first seven fights before dropping a 10-round decision to the more experienced Radames Cabrera at the Felt Forum in December 1973.

The fights were getting tougher, but the young prospect was game. He traveled to France and drew in a fight that he believes he won against Nessim Max Cohen, he knocked out the big-punching Eugene “Cyclone” Hart in a firefight, and showed heart to get off the canvas twice to stop the talented Mario Rosa. Mustafa Muhammad also gained valuable experience in losing a 10-round split decision to Bennie Briscoe. 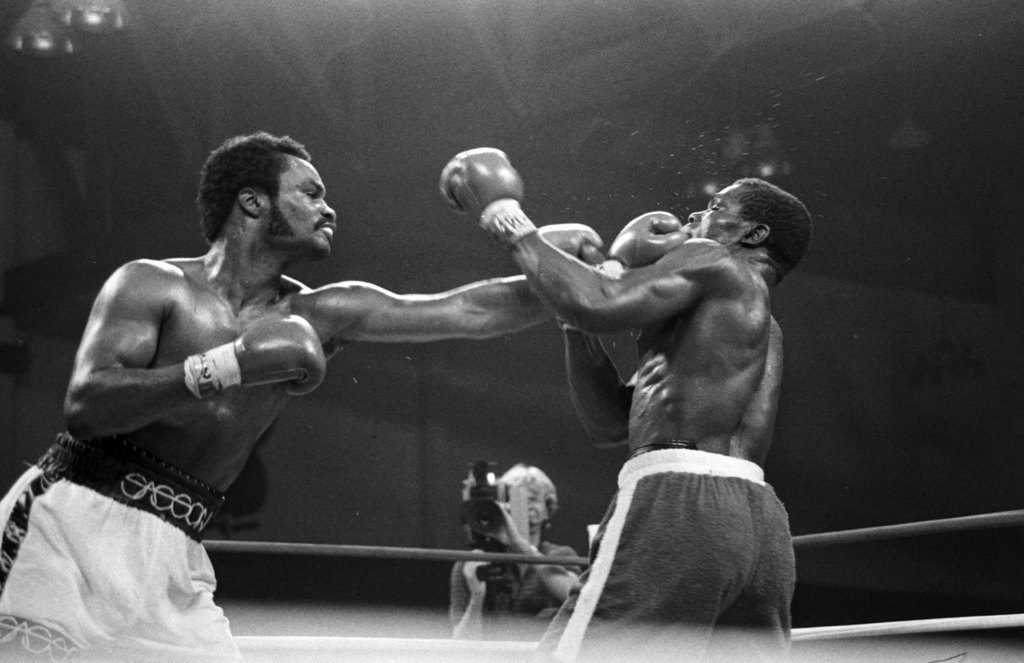 “The Flame” roared back with nine consecutive wins, the most impressive of which was a bruising affair with Matthew Saad Muhammad, who he edged by 10-round split decision in March 1977.

“He fouled me a lot; he was a rough and tumble guy,” Mustafa Muhammad explained. “He gave me a good fight, he was a good fighter, and he was champion for a while. I thought I beat him, but they took two points from me. I cut him up, but they still gave it to him.”

“[Scott] beat me fair and square,” the former champion admitted. “It was no problem [fighting in a prison], I knew I was coming out [laughs.]”

“[Johnson] kept coming and I kept hitting him,” he recalled. “It was great, I achieved a lifelong dream, and I had a platform where I announced that my name was no longer Eddie Gregory in the ring afterwards. I trained hard, I trained for eight weeks, so I just relaxed [and enjoyed the title win].”

Following stoppage victories over Jerry Martin and Rudy Koopmans in title defenses, Mustafa Muhammad was scheduled to face old rival Saad Muhammad, who had since won the WBC title, in a unification matchup at Madison Square Garden in February 1981.

It was to be  part of a huge promotion dubbed “This is it”, which would feature two other world title bouts: Thomas Hearns vs. Wilfred Benitez and Wilfredo Gomez vs. Mike Ayala, as well as Gerry Cooney vs. Ken Norton. However, the whole event was cancelled when the promoter, Harold Smith, disappeared amid fraud allegations. 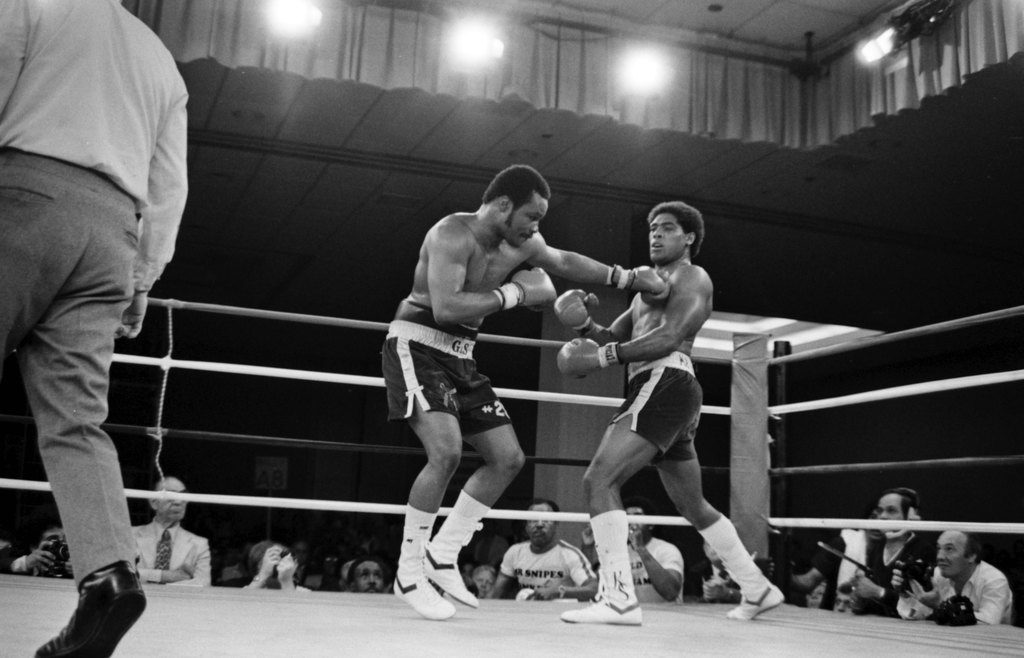 Mustafa Muhammad (left) moves up to heavyweight for a bout against Renaldo Snipes. Photo from The Ring archive

Mustafa Muhammad even fancied his chances against then-heavyweight champion Larry Holmes and decided to move up to the glamour division for a fight against Renaldo Snipes, who ultimately beat him.

“I knew I would have put up a great fight with Larry,” Mustafa Muhammad insisted. “I had a jab equal to his, and I could punch, so I wanted to fight him.

“Renaldo Snipes? He didn’t stand in front of me, all he did was run the whole fight.”

Mustafa Muhammad knew after his heavyweight setback that he wasn’t getting a fight with Holmes, so he returned to light heavyweight and put his title on the line against the and up-and-coming Michael Spinks.

The former titleholder returned with 10 consecutive wins, and when Spinks, now the undisputed champion, vacated his titles, Mustafa Muhammad was in line to fight for the vacant IBF belt against the unbeaten Slobodan Kacar in Italy.

“I beat him so bad that he didn’t fight for nine months,” he said of the split decision that went against him. “That was highway robbery.”

Following an extended layoff, Mustafa Muhammad won two fights before being stopped for the only time in his career, by Arthel Lawhorn. He knew it was time to walk away and did so with a record of 50-8-1 (39 knockouts).

As a coach he has worked with many top fighters, including Iran Barkley, Rob Brant, Chad Dawson, Badou Jack and Arthur Williams.

Now 68, Mustafa Muhammad has nine children and six grandchildren. He lives in Las Vegas and trains out of the Mayweather Boxing Club. Away from the sport he enjoys spending time with his family and relaxing with old movies. He had a small role in the Oscar-winning Raging Bull, playing middleweight contender Billy Fox, and also appeared in a crime drama series Spenser: For Hire.

Famed sportscaster and writer Al Bernstein is in the early stages of writing a book on the former champion’s life.

Mustafa Muhammad graciously took time to speak to The Ring about the best he fought in 10 key categories.

BEST JAB
Michael Spinks: He stayed busy with it.

BEST DEFENSE
Jesse Burnett: When it was tough to go to the head, I always went to the body. You can’t move the body like you can move the head. Burnett had plenty of head movement, so I had to break him down to the body.

BEST HANDSPEED
Mario Rosa: He had good handspeed but it was also because it was coming from the southpaw position.

BEST FOOTWORK
Rosa: He came from the other side and it was hard for me because it was my first time fighting a southpaw.

SMARTEST
Burnett: He had a great jab and head movement, the total package. He didn’t achieve what he could have achieved.

STRONGEST
Matthew Saad Muhammad: He was top heavy, so he was physically strong. I had to do things differently to beat him. What I did was establish my jab – body, head, head, body – just move it around. Matthew was stronger than Galindez.

BEST CHIN
Saad Muhammad: I rocked him, but he came back. He was known for that, he just kept coming so I just kept hitting him.

BEST BOXING SKILLS
Rosa: Because he came from the left side. He had good head movement, he had a nice right jab and I wasn’t used to that.

BEST OVERALL
Saad Muhammad: He could box and he could punch, a very tough man, he could do a bit of everything. It would be between him and Spinks, but I’ve got to go with Matthew.