Andres Cortes gets off the canvas, wins decision over Alejandro Salinas 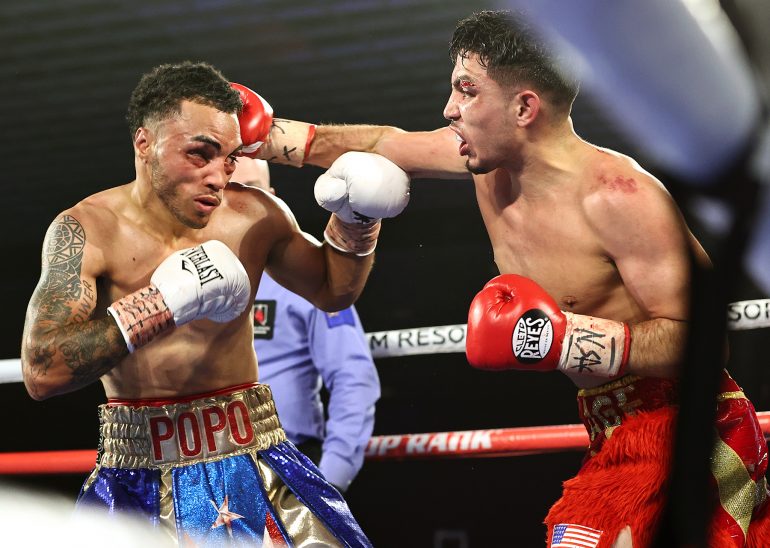 Andres Cortes came into the fight predicting a knockout of Alejandro Salinas.

Instead, it was Salinas who scored a fourth-round knockdown. Nonetheless, Cortes rebounded to get the nod with a unanimous decision on a Top Rank on ESPN card at the MGM Grand Conference Center in Las Vegas.

Judge Adelaide Byrd scored it 76-75, Dave Moretti scored it 79-73, who didn’t credit Salinas’ knockdown in the fourth round, and Patricia Morse Jarman submitted a score of 77-74, all for Cortes, who improved to 13-0 with seven knockouts.

In a compelling first round, Cortes and Salinas traded bombs.

Salinas buzzed Cortes with a big right hand that caused the latter’s eyes to roll back. But Cortes closed the round with a combination that knocked Salinas off balance.

An accidental clash of heads opened up an ugly cut over the left eye of Cortes early in the second round. With just over a minute remaining in the frame, Cortes caught Salinas with a stiff right hand.

Cortes shifted to the outside of the ring in the third round, choosing to use his jab and right hand to keep Salinas at bay. But Salinas trapped him against the ropes and both fighters subsequently engaged in a violent exchange of punches.

Salinas, though, had his moments, pushing Cortes to the ropes, where both fighters exchanged a flurry of lefts and rights.

With about 27 seconds left in the fourth round, Salinas blasted Cortes with a right that nearly sent him to a knee. However, the ropes held him up, which resulted in the referee correctly ruling a knockdown.

Cortes connected with a solid right hand in the fifth round that kept Salinas honest. At this point in the contest, Salinas was reddened from head to toe from Cortes’ sustained attack.

Cortes took over the action in the sixth round. He caught Salinas with a combination early that forced him to clinch. Cortes then followed up with two more right hands.

Cortes turned the tables in the seventh round when he moved Salinas into the ropes after connecting with a right hand. But time was called by referee Celestino Rui for the ringside physician to examine Cortes, who was still bleeding over his left eye from the gash.

Salinas landed a big right hand early in the eighth round, but it was too little, too late.