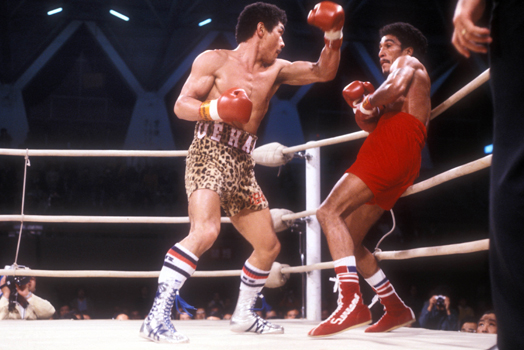 Seranno (right) on the defensive against Yasutsune Uehara in their 1981 rematch.
29
Jun
by Anson Wainwright

Serrano was born on November 17, 1952 in Toa Alta, in the north of Puerto Rico. He was from a big family and took up boxing when he was 14 years old.

“I was a calm boy, but during the few times I saw boxing in movies, I knew that was what I wanted to do,” Serrano told The Ring through Fernando Gaztambide. “I saw a friend walking to the Hato Texas gym. I accompanied him and on the first day the coach saw I was very skinny and did not pay attention to me.

“They put me in with a tall veteran lefty and it was a great fight that day in the gym. When I got out of the ring, the coach told me to come back tomorrow to continue training and I did that. He wanted to discourage me at first but he saw my potential.”

Serrano went 14-6 as an amateur before turning professional days before his 17th birthday in November 1969. He lost his third bout before rebounding to win the Puerto Rican featherweight title in October 1971.

The young prospect continued to progress and was offered the opportunity to face reigning WBA featherweight titleholder Ernesto Marcel in a non-title bout in Panama City in the fall of 1973. Although he lost the bout, Serrano put up a good effort and dropped a close 10-round split decision.

Utilizing that experience, the Puerto Rican star won his next nine fights to earn himself a shot at WBA junior lightweight titleholder Ben Villaflor in Hawaii in April 1976. After 15 rounds the pair could not be separated and that bout was declared a draw.

Undeterred, “El Torbellino” (The Whirlwind) stayed active with two wins before Villaflor came to Puerto Rico for a rematch.

“I told him that the title was borrowed,” said Serrano. “I knew I was going to win, so my thing was to prove that I can do it again and I did. It meant a lot. You have to fight for what’s yours, day in and day out.”

During this time there was some talk of a fight with his countryman Alfredo Escalera, who held the WBC title. However, for myriad reasons, the unification bout didn’t take place.

“Fans wanted the fight at one time,” Serrano recalled. “We were both at the top with two world titles in Puerto Rico and we wanted to keep that. Also, our careers were always taking different routes. We never received an offer with good money.

“I stayed at my weight, and Escalera retired. We are good friends now; we look out for each other always.”

Serrano’s title wins were starting to get him some attention in the U.S. and in August 1980 he met Yasutsune Uehara on the undercard of Pipino Cuevas-Thomas Hearns in Detroit. The defending champion was ahead on the scorecards, when his Japanese opponent landed a right hand that dropped him.

“He landed a good punch,” Serrano admitted. “I felt I was ready to continue, but the referee stopped the fight. No excuses.”

Uehara’s unlikely triumph was later voted The Ring Magazine “Upset of The Year” for 1980.

After one comeback win, Serrano traveled to Japan for the rematch. Boxing more cautiously, he regained his title by 15-round unanimous decision.

“It was a dream come true,” he explained. “I surpassed myself, trained hard and that made for good results. I remember celebrating with my people and seeing young ones very happy.”

In Serrano’s second championship tenure he made three successful defenses before coming unstuck against the big-punching Roger Mayweather who stopped him in eight rounds.

Following a 16-month hiatus, Serrano returned up at lightweight, but his comeback was halted in 1987 when he was convicted of drug trafficking and sentenced to 15 years in prison. He was released in 1995 and fought twice more before retiring for good with a record of 50-6-1, (17 knockouts).

“I have not looked back,” he said of his eight-year incarceration. “I was like a kid from the street. I was tired of boxing and the street called me.

“I learned in prison: to value myself, to value people who really love me. Jail helped me. I wrote and read a lot, did a lot of exercise. I told the prisoners that they can take advantage of the time [inside] for when they leave; they can get ready to do good in society. Now I’m fine.”

“I spent some time in the gym helping the young ones. In this life I have learned to always look for more knowledge, more things to do. I feel good; very good physically, and I’m well financially. I consider myself lucky, but I’ve never stopped working.”

Serrano, now 67, is married and has two children and three grandchildren. He spends his time between his two homes, one in Arecibo at his beach house and the other in the city of Toa Baja. He owns Torbellino Construction and sells Mosaics. He likes to paint and make murals. He also helps various charities.

Every year, on July 4, Serrano hosts an event for former champions along with the WBO at his beach house. This year’s event has been cancelled due to the COVID-19 pandemic.

The former two-time world titleholder graciously took time to speak to The Ring about the best he fought in 10 key categories.

BEST JAB
Tae-Ho Kim: Most of my fights were against warriors, who made little use of the jab. Tae-Ho Kim’s jab was like a snake and was very difficult for me to handle in the first couple of rounds.

BEST HANDSPEED
Kim: Tae-Ho Kim had fast hands. At that time you got very little info about your opponents and I was surprised at first with his speed. I had to change the plan and attacked the body, then the head and vice-versa until the fight was stopped.

BEST FOOTWORK
Alcala: Alcala was great at that. Always moving and throwing punches, looking for angles to hit.

SMARTEST
Francisco Villegas: He was very difficult to hit. He knew my style and how to adapt. Sometimes I felt like I was looking in a mirror. We knew each other very good in the ring, we both are from the same island. He was very skillful too.

STRONGEST
Yasutsune Uehara: Every fighter was strong. Any fighter can deliver a good punch, so I can say my first KO defeat against my strongest opponent, Yasutsune Uehara. He felt very strong. Thankfully, I was capable of defeating Uehara in front of his people in Japan and that was a very exciting part of my career.

BEST CHIN
Benedicto Villablanca: He could take all my shots and keep going like nothing happened.

BEST PUNCHER
Young Ho Oh: Oh of Korea. Every shot was intended to knock me out. I remember taking shots on my shoulder, head, arms and elbows and they were hurting me. I gave him the fight of my life, it was like fighting with fire.

BEST BOXING SKILLS
Uehara: Overall it would be Uehara because he was good – not great – at all aspects of boxing. That made him a great boxer, being good in all areas.

Fernando Gaztambide helped co-ordinate and translate this feature. The Ring appreciated his assistance.