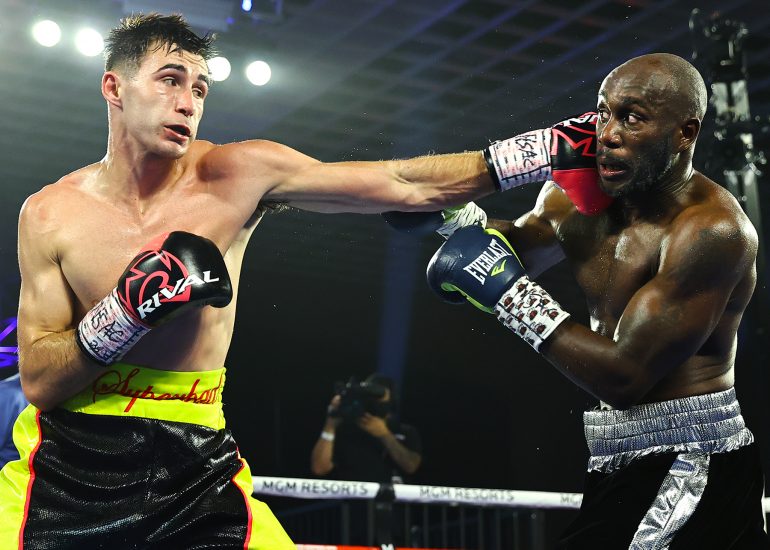 Vlad Panin recovered from the first loss of his pro career to outpoint Benjamin Whitaker over six rounds at The Bubble inside the MGM Grand in Las Vegas.

But it wasn’t easy as the experienced veteran Whitaker gave Panin a run for his money.

Panin escaped with a majority decision in the third fight of a five-bout Top Rank on ESPN telecast headlined by the 10-round bantamweight bout featuring Jason Moloney taking on Leonardo Baez.

Judge Max DeLuca scored the bout 57-57 while Lisa Giampa and Patricia Morse Jarman turned in a 58-56 for Panin, who is a student at UCLA.

“Super Bad” Panin (8-1, 4 knockouts) a 24-year-old Belarus native based in Los Angeles, was consistent with his jab and his right hand in a fight that was nearly canceled after a cornerman for Whitaker tested positive for COVID-19. But a change in protocol allowed for boxers to compete, given that they do not test positive for the virus.

Whitaker (13-4, 3 KOs), 36, of San Antonio, Texas also landed his right hand consistently. However, he was more economical with his punches in the middle rounds, which allowed Panin to dictate the pace.

Prior to the fight, Whitaker had not lost since getting outpointed in August 2016 by Roberto Arriaza.

It was Panin’s first fight following his unanimous decision loss to Moises Fuentes in February.