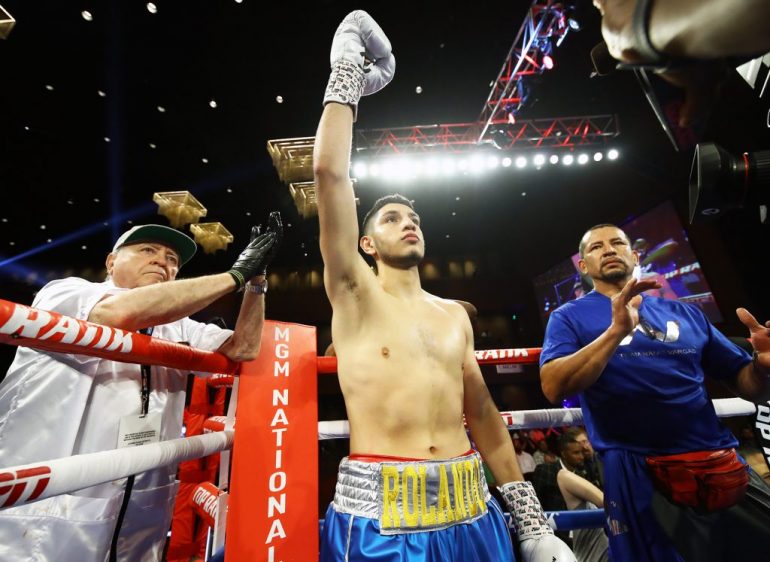 The introduction came early. It arrived with bulbous, 16-ounce padded gloves that covered three-quarters of his stubby arms. At the other end of his meager jabs and slow-motion combinations was a weary, smiling face with his hands up propped on his knees.

That was Rolando Vargas’ first foray into boxing, as a three-year-old pain-in-the-ass to Rolando Sr., his father whose eyes were half-mast, tired as hell after working long hours at a tannery.

It didn’t stop Rolando Jr. from pestering his dad. And regardless of how fatigued the old man was, it didn’t prevent him from teaching his son the rudiments of boxing.

Vargas (5-0, 5 knockouts) will get his primetime chance Tuesday night, when he faces off against another undefeated prospect, 22-year-old Miguel Contreras (10-0, 6 KOs), on ESPN’s show in a six-round junior welterweight bout from the MGM Grand.

The 5-foot-8 Vargas comes in at 137, while Contreras is 5-7 and weighed in at 137 ½. This will be the third undefeated fighter Vargas, 20, will take on in his young career—and his most challenging.

But that doesn’t faze him.

“Contreras is a good jabber, and I’ll work my distance and counter him, since he’s shorter than me,” said Vargas, who came to the United States when he was 10 months old and settled in Milwaukee, Wisconsin. “It doesn’t matter who I fight. He has two hands; I have two hands. My father always told me as I was coming up, there’s no small opponent.

“Hard work and the dedication will tell.”

Vargas is managed by David McWater, the CEO of New York-based Split-T Management who has high hopes for the prospect.

“I think Rolando is really special,” McWater said. “He knocked Gabe Flores down a couple of years ago, and it’s why he’s not training with those guys anymore. Rolando wanted to fight Gabe in his pro debut.

“He’s not arrogant at all. He just believes in himself. He’s not afraid to take on anyone. He fought a guy in Maryland, Nathaniel Lee Davis, who was 10 years older than Rolando. Davis was a local guy and had all of the media and Rolando knocked him out in the second round.”

In fact, McWater admitted, there were three undefeated prospects prior to Contreras who all turned down Vargas. Two of the three were 10-0.

“Rolando gets ducked constantly, no one wants to fight him,” McWater said.

“Maybe some people see a different comparison for Rolando, but we have this at 137 and I expect Contreras to give him some trouble,” McWater said. “But we feel really good about the fight.

“We think Rolando is going to be a very, very special fighter.”

Vargas already received one victory of sorts last Thursday, when the United States Supreme Court blocked the Trump administration’s attempt to end Deferred Action for Childhood Arrivals (DACA), an Obama-era program that protects hundreds of thousands of immigrants brought to the US as children from deportation.

Vargas is one of them.

“Me and family faced discrimination coming here from Mexico and I turned pro hoping to give them a better life,” Vargas said. “We’re here legally, but it’s been a long journey. I was 10 months old when I came here from Mexico.

“This country is great. I appreciate this country and what it’s allowed me to do. I hope I can stay here.”