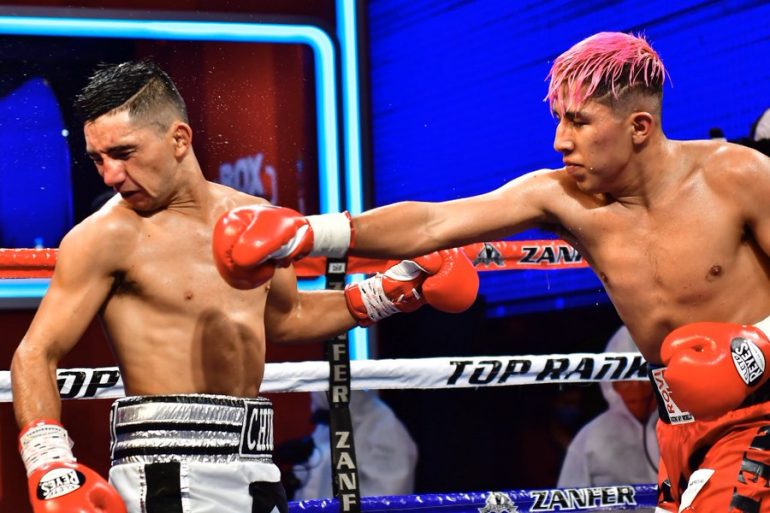 Featherweight Edwin Palomares battered fringe contender Carlos Ornelas, eventually dropping him to the canvas before the fight was stopped in round 5 at the Azteca TV Studios in Mexico City.

After a feeling-out opening round, the shorter Palomares closed the distance between the two fighters, letting his hands go and connecting with several combinations. The shorter Palomares did his best work in the pocket, forcing Ornelas to fight off his back foot.

With less than a minute left in round 5, Palomares landed a barrage of punches, forcing Ornelas to drop to one knee. As an eight-count was administered, Ornelas’ corner threw in the towel, saving him from taking any more punishment.

Featherweight Sergio Sanchez scored a one-punch knockout victory over Gustavo Pina moments into the third round.

Sanchez (15-1, 9 KOs) dropped Pina with a left-right combination to the head late in the opening round. To his credit, Pina (8-3, 5 KOs) was able to find success during the following round by staying in the pocket with Sanchez and connecting with his share of hooks and crosses.

Sanchez dramatically ended matters The end came at six seconds into round 3 as Sanchez landed a left left uppercut to the chin, dropping Pina flat onto his back, prompting referee Cesar Calderon Varela to immediately stop the bout.

Pina remained on the canvas for a few minutes, but was able to stand up under his power.