Rafael Remembers: De La Hoya vs. Mosley I on the 20th anniversary of the ‘L.A. Event’ 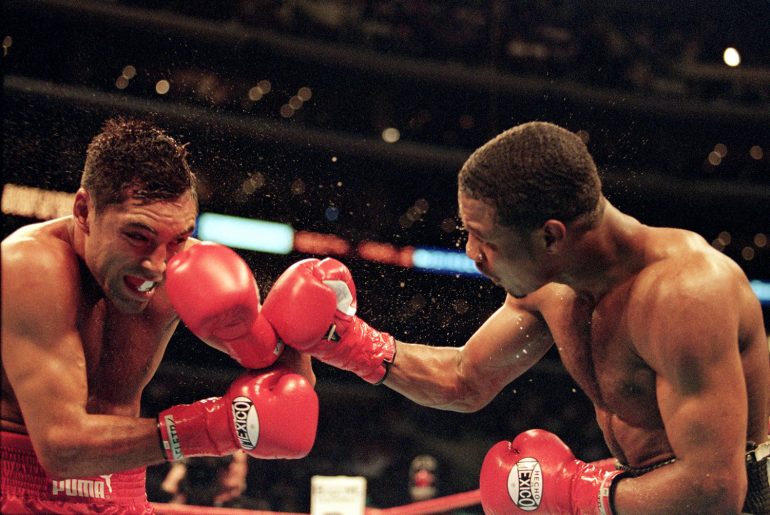 Oscar De La Hoya and Shane Mosley were in their primes when they met for the first time as professionals and their destined showdown lived up to expectations. Photo / Al Bello-Getty Images
17
Jun
by Dan Rafael

Big-time boxing events typically bring out A-list celebrities who seemingly want to see the big fight as much as they want to be seen, but this one was different.

As much star power that is usually ringside for major fights, especially in Las Vegas, the wattage was off the charts when then-welterweight champion Oscar De La Hoya and “Sugar” Shane Mosley, friendly boyhood rivals battling for the WBC title as well as Los Angeles hometown bragging rights, christened the Staples Center in the heavily anticipated first main event in arena history.

The city, long a boxing hotbed, had not hosted a mega fight in years, and this was L.A.’s night to shine. It was 20 years ago Wednesday – June 17, 2000 – and the event and fight more than lived up to its advance hype. 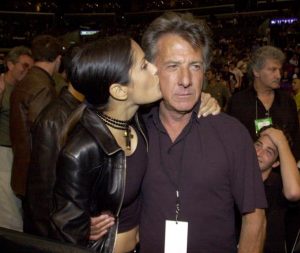 Lighten up Dustin, you got a peck from Selma Hayek and you’re about to witness a great fight. Photo / Getty Images

Not only did the stars turn out – including Muhammad Ali, Denzel Washington, Dustin Hoffman, Pamela Anderson, Salma Hayek, Will Smith, Jada Pinkett Smith, Larry David, Kareem Abdul-Jabbar, Sidney Poitier, fight regular Jack Nicholson, Billy Crystal, Sugar Ray Leonard, Chris Rock and so many others – but they and everyone else inside the packed arena and watching on TVKO (which became HBO PPV) were treated to an epic fight of the year candidate that was eventually picked as the 2000 Event of the Year by The Ring (seven years before De La Hoya bought the publication).

“It seemed like it was attended by every director, producer, movie actor, actress, you name it,” De La Hoya said this week. “And it was a freakin’ great fight. You combine that together and you have the event of the year. What a fight, what an atmosphere.

“What I remember most about the whole event was the buildup – leading up to it was the celebrities talking on local TV about how excited they were about going to the fight. It was huge. I knew it was huge because even though I trained in Big Bear, and up there you don’t hear anything, no news – you’re in your own world – news (about the fight) would even travel up there. I would hear, ‘Oh, my gosh! Do you know the celebrities who are going?’ Everybody and their mother came out.”

And then De La Hoya surprisingly added, “It’s one of my favorite fights.”

It’s surprising because De La Hoya lost his WBC title to Mosley by split decision with judges Lou Filippo (116-112) and Pat Russell (115-113) scoring the intense battle for Mosley and Marty Sammon (115-113) voting for the Golden Boy. 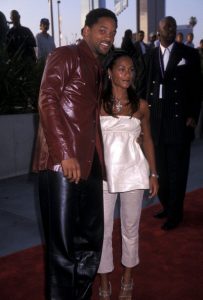 Will and Jada had Oscar’s back. Photo / Ron Galella Collection via Getty Images

“The only people to go to my locker room afterward, because obviously I lost, to tell me how proud they were of me were Will Smith and Jada Pinkett Smith. So, I remember that clearly,” De La Hoya said.

For me it is one of the most memorable events I have covered in more than 20 years on the boxing beat, and not only because of the significance and action of a fight that stamped Mosley as the new pound-for-pound king.

The bout was just a few months into my tenure as the boxing writer for USA Today, and although I had already covered a few fights for the newspaper, I have always considered the first Mosley-De La Hoya fight to be the first really big fight I covered. Further, it marked my first trip to California (for business or pleasure) and it was also the first time I ever met Top Rank promoter Bob Arum and his staff in person as well as De La Hoya and Mosley, both of whom I would go on to cover for the remainder of their careers.

I vividly recall meeting De La Hoya for the first time inside the press room at Staples Center a few days before the fight when Arum called me over to them. “This is Dan Rafael, the new boxing guy at USA Today,” Arum said to his star fighter. De La Hoya shook my hand, flashed his million-dollar smile and said, “I guess that means we’ll be talking a lot then, won’t we?”

De La Hoya and Mosley often boxed in the same amateur tournaments – De La Hoya was one division smaller than Mosley at the time – trained in the same gym and had aspirations of making the 1992 U.S. Olympic team. De La Hoya made it and won the gold medal that launched him to superstardom. Mosley was upset by Vernon Forrest in the box-offs and never made it to Barcelona, but he was close enough with De La Hoya that he sparred more than 60 rounds with him in order to help him prepare for the Games. 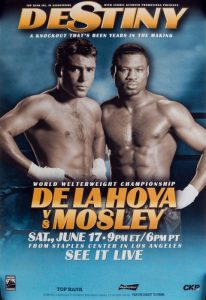 Would all that familiarity with each other play a role when they met as pros for huge stakes and big money – a guaranteed $8 million for De La Hoya and $2 million for Mosley plus pay-per-view upside? That was a question on everyone’s mind going into the fight dubbed “Destiny” because it was a fight both men knew would eventually happen.

Another vivid memory from fight week came two days before the fight, when about a 100 or so people, myself included, gathered in the Staples Center press room for a screening of a video of the first two rounds of a sparring session between De La Hoya and Mosley. Mosley’s mother, Clemmie, had discovered the tape about a month earlier during spring cleaning and handed it over to HBO executive Mark Taffet so a clip could be used during the pay-per-view broadcast.

But the media was treated to its full contents that Thursday afternoon. We watched in silence as the two future Hall of Famers flicked jabs at each other, Mosley wearing blue head gear, De La Hoya in red. We didn’t learn much from the video, but it only heightened the anticipation for the real thing that would take place two days later.

“When we both turned pro, we knew this fight was bound to happen,” Mosley said days before the fight. “It had to.”

De La Hoya said he also believed the fight had to happen. HBO had been building toward it. Mosley, a dominating lightweight world champion, had made eight title defenses and won them all by knockout before vacating his belt. He skipped over the junior welterweight division and took two fights at welterweight to prepare for the likely showdown with De La Hoya.

“We would spar together, train together. His father Jack, I knew him very well,” De La Hoya said. “It really was destiny since childhood. We were 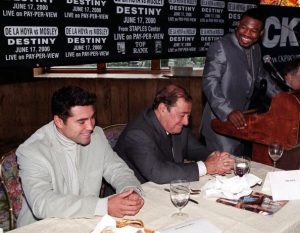 Bob Arum didn’t have to twist De La Hoya’s arm to fight Mosley even though Oscar knew how tough Shane would be. Photo / MATT CAMPBELL/AFP via Getty Images

destined to fight each other and it was like Sugar Ray Robinson versus Jake LaMotta. It was big, and I knew it was going to be tough.”

De La Hoya recalled getting the call from Arum when the deal began to fall into place.

“Bob Arum would call me – and this was protocol for him – he would call me and he would talk to me and say, ‘I have this opponent for you,’” De La Hoya said. “Then he said, ‘Shane Mosley.’ He said, ‘Do you want to fight Shane Mosley?’ I hesitated because I grew up with Shane Mosley and I knew how tough he was. And at the time he was beating everybody, but the person I am, I was like, ‘OK, Bob, I’ll fight him. No big deal.’ Then he mentioned to me ‘You’re going to be opening up the Staples Center (for boxing) and you’re going to fight in L.A. and it’s your homecoming party.’ And I was even more excited.

“I knew Mosley was tough. For me it was a pick-‘em fight because I grew up with Mosley and I knew he was tough and nobody wanted to fight him.”

De La Hoya also knew it would be tough because he was having trouble making 147 pounds, so when he did, he was overjoyed and told the story of what happened next. 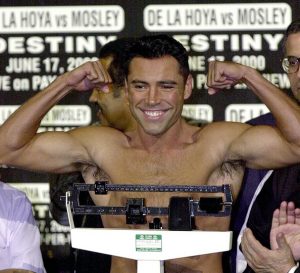 Oscar looked and felt great at the weigh-in… but after dinner that night, not so much. Photo / Vince Bucci / AFP via Getty Images

“I told my team let’s go back to East L.A. and have dinner after the weigh-in to celebrate making weight because I was ecstatic I made the weight,” De La Hoya said. “So, we go to my favorite little Mexican spot and we’re having a good old time. I ordered two dozen oysters. That night I had the runs like there’s no tomorrow. I swear to you. The whole night. The next day I weighed like 143. I lost four pounds from the weigh-in. My stomach was so sensitive.

“I almost didn’t fight. Bob Arum convinced me to go out and fight in the dressing room. I was up in the ring and feeling the pain in my stomach and just said to myself, ‘OK, just don’t get hit with body shots.’ It was one of those memorable fights I will never forget.”

The fight delivered everything fans could have hoped for. It was close and competitive all the way, including the electrifying 12th round, the best of the fight that saw the two men locked in one fierce exchange after another with the outcome seemingly still up for grabs.

After referee Lou Moret called a brief timeout to wipe up moisture on the canvas, De La Hoya and Mosley touched gloves and waded back into battle with two minutes left for the most memorable sequence of a most memorable fight.

“Brilliant action in L.A.’s biggest fight ever,” HBO broadcaster Jim Lampley said, his voice rising as the fighters bombed away. 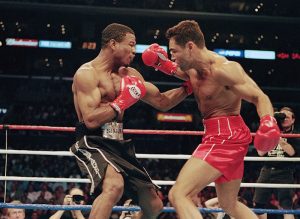 “Both of them daring to be great,” commentator Larry Merchant said before Lampley followed with one of his signature calls: “Both going for the knockout in a classic pitched battle!”

De La Hoya remembers that final round as if it was yesterday instead of 20 years ago.