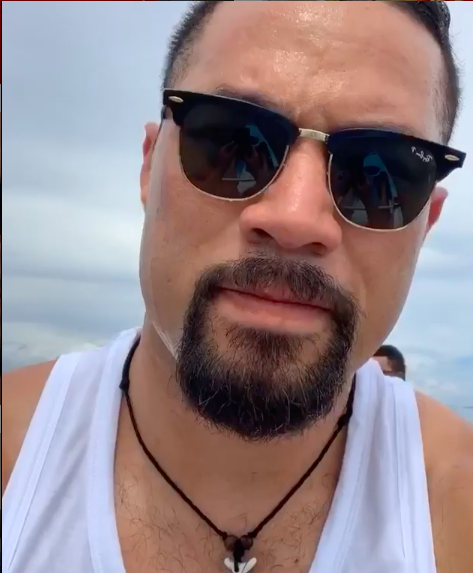 09
May
by Michael Montero

While most fighters have gone silent during the global shutdown of the COVID-19 crisis, Joseph Parker has found a different way to entertain fight fans.

Parker, the first and only heavyweight boxer from the Pacific Islands to win a major world championship, has been using his social media platforms to spread positivity and humor. The New Zealander has posted a series of videos during lockdown, reenacting memorable scenes from popular films such as “Love Actually,” “Grease,” “Anchorman,” and “Back To the Future” (see below), among others.

In his last outing, February 29, Parker scored a stoppage win over Shawndell Winters in Texas.

Perhaps more than any other active fighter, the 28 year old Parker (27-2, 21 KOs) has managed to significantly enhance his global profile while the entire boxing world is on hold. Best of all he’s done it in a fun, creative, and uplifting way.

“When the lockdown was first starting off, people were panicking and worried,” he told Ring. “My friend Kerry Russell is great behind the camera and his editing skills are the best. He came up with the idea of making the videos to spread a little positivity, to remind people that even though we’re all stuck at home we can still have a laugh and have some fun.”

The videos went viral and much to the surprise of Parker and his crew, fans were immediately asking for more. What had begun as a one-off to pass the time quickly turned into a new hobby. His friend Kerry would come up with the ideas for new videos. Filming would take a few hours, then Kerry would quickly edit and release them within a day or two. Each successive video has been a bigger hit on social media than the last.

“I was very surprised at the reaction,” Parker said. “We were just doing it for fun because we had such a good time making them. But the reaction was pretty crazy, beyond anything I expected. It only pushed us to keep going further, to inspire people and give hope.”

Parker says that what he’s enjoyed most is how he’s been able to show everyone a side of himself normally left for family and friends.

“The best part about the videos is that’s who I really am,” he said. “Leading into a fight, it’s quite hard to show that side. You have to show that you’re very prepared and taking it seriously. But the quarantine videos have enabled me to show people what I’m really like at home.”

Beyond sharing another side of himself, the videos have allowed Parker to share his family with the world. His partner Laine (pronounced “Lay-Nee”) Tavita has participated in a number of them, as have their three young daughters Elizabeth, Shiloh and Michaela. Other members from the boxing community have got involved as well. A video recreating “The Rocky Horror Picture Show” featured current Ring heavyweight champion Tyson Fury, legendary ring announcer Michael Buffer and promoter Eddie Hearn, as well as several members from the New Zealand sports world.

When asked for a sneak peek of what the next video will be about, what possible ideas could be in the works, Parker says he has no idea. “We just released this latest one (the “Anchorman” parody) on Friday. We filmed it the day before, and Kerry came up with the idea for it the day before that. So, there’s nothing in the pipeline right now. But as soon we do have an idea, we’ll work on it straight away.”

This writer votes for a tribute to “The Three Stooges.” It would be hilarious to see three Joseph Parkers slapping each other.