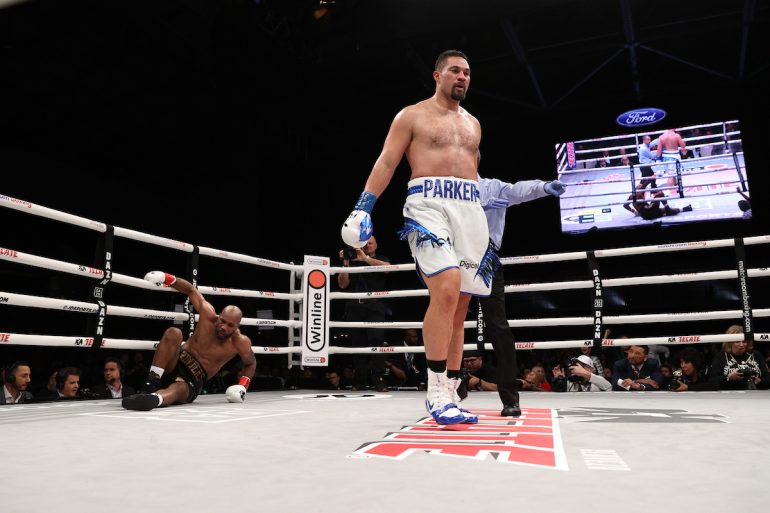 The bout was the sixth on the undercard of the Mikey Garcia-Jessie Vargas DAZN-streamed welterweight main event at The Ford Center at The Star in Frisco, Texas.

For Parker, the win was his third in a row since dropping back-to-back bouts agains Dillian Whyte and Anthony Joshua, the latter of whom outpointed Parker to take his WBO title back in March of 2018.

Parker wasted little time in the first round and looked for the knockout. He spent a majority of the first round working behind his jab and finished off his combinations with the left hook.

In the second round, Parker smothered Winters against the ropes and landed a series of crisp right hands, but Winters took the shots well.

Parker (27-2, 21 knockouts), 28, a New Zealand native fighting out of Las Vegas, went back to boxing intelligently in the third round. He used his jab to set up the right hand, then went back downstairs with jabs to the body.

Late in the third round, Parker floored Winters with a monstrous right hand. Winters, to his credit, rose to his feet and was saved by the bell.

A clash of heads in the fourth frame opened up a cut over the right eye of Parker, who then took punishment late in the round with two ferocious right hands from Winters.

Parker wanted to put him to sleep with this shot. ? pic.twitter.com/p5VI75dPqU

The end came at 2:40 of the fifth round when Parker knocked Winters out of the ring with a three-punch combination that sent his foe through the ropes and onto the apron.

Israil Madrimov stung and outclassed Charlie Navarro from the onset and dropped him twice en-route to a sixth-round stoppage.

Madrimov’s performance was nothing more than an impressive showing of boxing superiority.

In the first round, the speed difference was evident, as Madrimov flicked his jab and repeatedly found the target. Then Madrimov would switch stances and go downstairs.

Navarro failed to land a significant punch the entire fight.

In the fifth round, Madrimov nailed Navarro with consecutive straight left hands to the body, then switched from southpaw to orthodox and replicated the same attack from different angles. Navarro was thrown to the canvas at the end of the round by Madrimov, but referee Benjy Esteves ruled it a slip.

The sixth frame proved to be the end for Navarro, who had shown incredible resilience up to that point. A destructive liver shot sent Navarro down writhing in pain. Somehow, Navarro rose before the count of 10, and the referee allowed the fight to continue. But Madrimov dropped him seconds later, and Esteves stood over Navarro and stopped the fight. The time of the stoppage was 2:24. 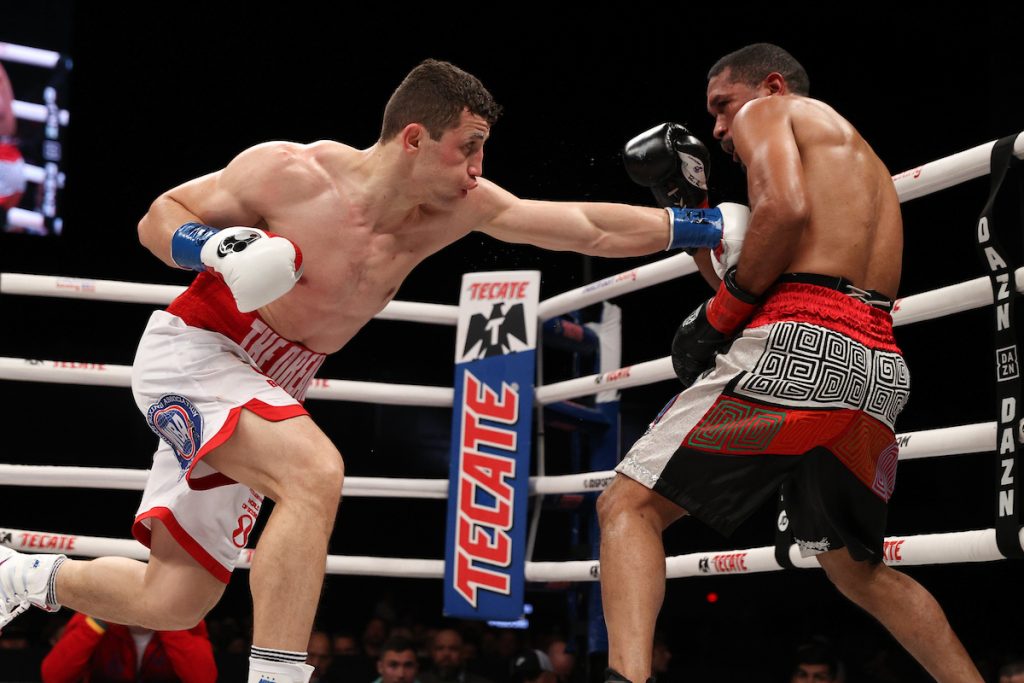 Madrimov (5-0, 5 knockouts), a 25-year-old Uzbekistan native training out of Indio, Calif., who earned gold medals at the 2018 Asian Olympic Games, 2017 Asian Games and silver medals at the 2011 World Amateur Championships, is one of boxing’s hottest prospects. With 475 amateur bouts under his resume, Madrimov could prove to be the sport’s next superstar.

Pacheco buzzed Riojas in the opening round with a crisp right hand that left his opponent trembling against the ropes but was unable to finish the job.

Riojas was hurt again in the second round from a heavy right hand but exhibited a huge heart by not only staying on his feet, but also fighting back and managing to land a series of body shots in return. Late in the round, another right hand sent Riojas into the ropes, but the referee did not rule it a knockdown.

Pacheco (8-0, 7 knockouts), 18, of Los Angeles, sent Riojas into the ropes once more in the third round, as his foe proved to be sturdier than anticipated.

Riojas (21-13-1, 10 KOs), a 36-year-old journeyman from Mexico, kicked off the fourth round by driving Pacheco into the ropes in a change of strategy, but the referee separated them. When that occurred, Riojas lunged forward and landed with a straight left hand, but Pacheco tied him up. Late in the round, Pacheco switched things up and connected with a lead uppercut followed by a right hand. Again, Riojas refused to go down.

Pacheco hurt Riojas with a counter uppercut that sent him stumbling backward. But when Pacheco went in to capitalize, Riojas tied him up and fired back with several shots that found the target in a fun round.

In an exciting final round, Pacheco pounded Riojas with a fearsome right hand that sent him staggering into the ropes. Riojas then motioned with his gloves to “Bring it on,” and Pacheco obliged, hitting Riojas with the kitchen sink, but like the previous five rounds, Riojas pulled through.

Pacheco deserved every bit of this victory as he went the distance against a durable and experienced veteran who truly tested him to his wits.

The judges scored the bout 60-54 and 59-55 (twice) for Espino, who scored a unanimous decision victory to improve to 6-0 with four knockouts.

In a competitive first round, Espino used his jab early to set the pace. However, Savage, who entered the bout with all of his victories ending in knockouts, split the guard with a hard straight left hand. By the end of the frame, Espino was swelling under the right eye.

Savage clowned in the second round and got punished for it. For no apparent reason, he started to have a conversation with ringside announcers and the crowd, then got clipped by Espino with a right hand that sent him backward. Espino then followed up with a three-punch combination that again knocked Savage back.

Espino, 20, of Las Vegas, backed up Savage repeatedly in the third round with a solid display of boxing expertise, including one-two combinations, jabs, and right hands. Savage did next to nothing in the frame offensively but did plenty of clowning.

The bodywork entered the fray in the fourth round as Espino began to switch it up. He backed Savage into the ropes and landed with a straight right to the body and then the head. The action then moved to the center of the ring, where Espino hurt Savage with an uppercut, which forced his opponent to clinch. At this point in the bout, Espino started to land with his right nearly at will.

Espino teed off on Savage in the fifth round, rocking him with a plethora of hard lefts and rights. When Savage returned to his corner, his head hung down in dejection. They fought to the finish, to the cheers from the crowd, but Espino was clearly the better boxer, ripping Savage (3-6-1, 3 KOs), 23, of Tuscaloosa, Alabama, to the body with left hooks and right hands upstairs as the final bell rang.

In the opening frame, Acevado (7-0, 5 knockouts), 20, a Mexico native training out of San Bernadino, California, who is trained by Robert Garcia, ripped Knifechief with a stiff jab and excellent one-two combinations, including vicious uppercuts on the inside.

The second round was more of the same for Acevado, who beat his foe from pillar to post. He backed up Knifechief repeatedly with the jab and knocked him around the ring with lefts and rights, and hurt him badly to the body with a right hand.

Knifechief (12-12-1, 7 KOs), 30, of Shawnee, Oklahoma, who has been knocked out in three consecutive bouts, was severely rocked by a left hand in the third round that caused him to stumble into the ropes. Referee Rosario Solis was immediately ready to step in but had to avoid getting hit by a barrage from Acevado himself, but at 1:44, managed to sneak through to prevent Knifechief from taking any more damage.