OPINION: BJ Saunders is pound for pound No. 1 jackass in boxing 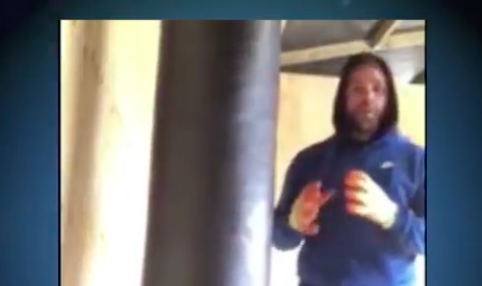 There is a rich history of idiotic behavior in the boxing sphere, but Billie Joe Saunders managed to stake out turf for himself, on the top tier, with his sub moronic and beyond tasteless video he posted and made heavy rounds Sunday into Monday.

If you saw it, your jaw dropped, at just how tasteless it is.

Saunders, age 30, was in a position to engage in a career defining fight, against Canelo Alvarez. But coronavirus has put the fight game on hold, and, we surmise, driven Saunders (29-0 with 14 KOs) to top himself, by coping with boredom in ridiculous fashion.

The 30 year old pugilist is the reigning WBO super middleweight titlist, and is ranked No. 5 by RING at 168. And No. 1 in Boxing’s Biggest Jackasses grouping.

On the video making the rounds Sunday into Monday, the “jokester” said he was in his barn, as he looked at a hanging heavy bag. The video, he said, was for “dad and husbands,” and people with girlfriends.

His advice, he said, was coming in the context of people doing social distancing, and self quarantining. People are feeling themselves at close quarters, and stress and anxiety are being aroused. “If ya old woman is givin’ ya a little bit of mouth,” he said, and your patience runs out, and “you’re just about to explode.”

She’s coming at you, in his scenario, and then, bang, he throws a right hand at the bag. “She’s just about to (say something), and all of a sudden you explode, BANG,” he says. “On the chin.”

While the missus is reacting to that, he says, dip down, and rip a left hook at her. “You’ve finished her off,” he continues. “That should do the trick.” He reiterates, the right hand to “make her delusional,” and then the left, to finish her off.

Saunders had his license to ply his trade suspended by the British Boxing Board of Control. The penalty came with knowledge that he has a track record for being sophomoric and tasteless beyond the bounds of what could be seen as “edgy” humor. Fight-game followers may recall him taunting an apparent drug addict, and filming it.

“How much do you need this crack,” the jackass said, pretending, I guess, to have some rocks with him. He looked to barter fake crack for some sex-play, asked the lady to accost a random passer-by, and then drove off, with a cohort, as they giggled.

Back in 2015, he’d stepped in it when getting into a back and forth with Katie Taylor.

“I think women are there for sex. Every night. Hard sex. Women’s there for cleaning, cooking, washing and sex. They’re not to put a head-guard on and get punched in the face. Although, I must say, Katie Taylor’s done extremely well and she once punched Frankie Gavin up in sparring. All jokes aside, that’s my opinion on women, but I’m just… eh… a sex maniac.” And a blatant misogynist who hasn’t learned his lesson, looks like…

I saw a published report that said it seems Saunders currently isn’t married, he does have a few kids.

In 2016, the Brit proved to be a loose cannon when on Twitter he mocked Dan Rafael’s weight and called him a paedophile. In 2017, he drew scorn when he seemed to make light of his young son going over to foe Willie Monroe at the weigh in, and aiming a strike at his groin. Classless, to be sure…But he apologized for it, as he has for pretty much every reported mis-step. But by now apologies ring too hollow.

In 2018, he stepped in it, too, when he tested PED positive for a banned stimulant before a planned title challenge in Boston against Demetrius Andrade.

At best, Saunders acts in a juvenile fashion, like a little boy stuck in a grade-school mindset. Earlier this month, BJ on video admitted to telling airline authorities that he knew someone to be getting on a plane had coronavirus. That someone, Josh Taylor, was pulled off the plane, along with his current trainer, Ben Davison. BJ said it was a prank. “He was going with Ben Davison, who obviously trains me and stablemate Josh Taylor,” Saunders explained after.  “Anyway they pulled him off the flight once I made them aware. When they pulled him off the flight he had his test and thank God he didn’t have coronavirus. Like I say, it’s nothing to be laughed at, a member of my family has just been diagnosed with it in the last 24 hours.”

And again, a “nothing to be laughed at” incident.

Some in the fight game reacted; Claressa Shields, the 154 pound champ, posted to social media a ‘how to’ video, in response.

A “video for all the women in abusive relationships!” 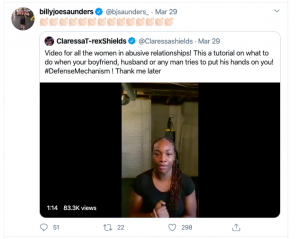 She gave some tips for when an abuser comes at you. She says, duck the right hand, and land a counter “in the nuts…Aim through the penis…boom, boom, boom…and that should make him hit the ground, and fall, like that, and you can get away from him. Tutorial, for all the women in abusive relationships.”

I congratulated her on her tutorial. “Somebody gotta stand up to people like that and men like that,” Shields told me.

Oh, and by the way, for what it’s worth, Saunders posted an apology to social media on Monday. 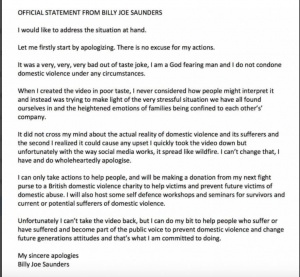 My three cents: That’s it for me, Saunders is what he is. He’s a jerk, a jackass, and you might say, whatever, what someone does outside the ring doesn’t matter to me, I say it does. Saunders time and again, and now again and yet again makes the sport look bad. That ban can be lifelong, as far as I’m concerned.