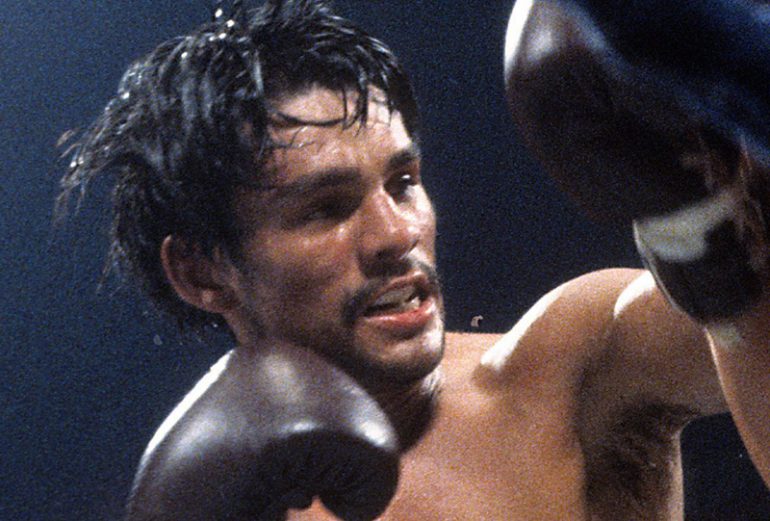 Editor’s Note: This feature originally appeared in the August 2019 issue of The Ring Magazine.

In his prime, Roberto Duran was a force of nature, as close to a perfect fighting machine as one could hope to see.

He was forged on the tough streets of El Chorrillo, a suburb of Panama City. He turned professional as a 16-year-old at bantamweight in 1968, winning a four-round decision over future world title challenger Carlos Mendoza.

Duran filled out into a lightweight and made his American debut in September 1971 on the undercard of his countryman Ismael Laguna losing the WBA 135-pound strap to Ken Buchanan. The fight put Buchanan and the WBA title in Duran’s crosshairs.

Just nine months later, Duran relieved Buchanan of the title and embarked on a legendary run. He’s widely regarded as the greatest lightweight in history; his reign of terror consisted of a then-record 12 successful defenses over a seven-year period.

“Hands of Stone” wasn’t content with that. He skipped the 140-pound division altogether in favor of chasing one of boxing’s biggest stars, Sugar Ray Leonard, whom he beat in a 15-round unanimous decision to claim the WBC welterweight belt.

The iconic figure went on to win junior middleweight and middleweight titles during a career that spanned five decades. Panama’s finest finally retired in 2002 after a car accident, doing so with a record of 103 victories (70 by knockout) and 16 losses. He was inducted into the International Boxing Hall of Fame in 2006.

Duran, now 67, lives in Panama. He is the subject of the biopic film Hands of Stone and a new documentary called I am Duran.

Duran looked back on six career-defining victories for readers of The Ring:

“I know that I was extremely happy that I became champion of the world, and I had the opportunity to fight in New York. That was a dream for me. The low blow was just an excuse for him (Editor’s note: Buchanan complained of debilitating pain from being hit low after the conclusion of Round 13 and declined to continue). That’s what Buchanan said for them not to take his title away. He knew he was losing the fight, that I had the control from the first round. I had put pressure on him in every round.”

“I was thinking walking into the ring that this time it was going to be different, because in my mind, I felt that even though he knocked me down, I won the first fight (Duran lost a unanimous decision to De Jesus in a 1972 non-title bout). So this time my mind was set to knock him out and to take him out of the ring, if necessary. When he dropped me (in the first round), I looked to my corner, to my trainer Ernesto ‘Plomo’ Quinonez and shook my head to tell him ’don’t worry, I’m fine, nothing happened, I’m not dizzy.’ After that knockdown, I became angry and stronger, and all I wanted was to defeat him. I wasn’t going to leave anything in the hands of the judges.”

​​​“I felt proud of being a Panamanian and loved by my countrymen. I was always grateful to be able to fight in my country and give them joy through my fights. It has been my greatest honor to represent Panama. I said next time I will send (Lampkin) to the morgue, because I had to lose a lot of weight and I felt very weak. Remember, back in that time the weigh-in was the same day as the fight. So I wasn’t feeling as powerful. I could have ended the fight earlier, but I was not in my best shape. Still, it was a great fight, great KO, and Lampkin was a great rival. I just want to clarify that it was a figure of speech – not that I actually wanted to kill him.” (laughs)

“I knew I had to get inside his head. I used tactics like insulting him, calling him names – I was disrespectful in every sense of the word, but this was a war and this was my strategy. You know, I was just so upset, because it was almost as if people were forgetting my capabilities, forgetting that I was also a champion with an impressive resume, and here comes this pretty boy, golden boy, and the media went crazy for him. He was indeed the media golden child: well spoken, educated – something that I never had the privilege to have, because I was so poor that at the age of 5 I was on the streets selling newspapers, cleaning shoes to help my family, and I didn’t have the privilege to go to school and get an education. So I guess this made me mad, and it became personal. I needed to show the world who ‘Hands of Stone’ was, so I trained like never before in my life. My mission in that moment was to rip from him the welterweight title. I made him fight my fight because he was a boxer. I frustrated him. I confused him completely. Like I said before, my strategy was to get inside his head and take away his concentration, and it paid off. He took it so personally that it made him want to go toe-to-toe with me, and that was his biggest mistake: to fight my fight. It was one of the most important victories of my life, if not the most important. Coming from lightweight to fight a true welterweight champion and take his belt against all odds has been the most gratifying achievement in my career. Even in my country, people thought I couldn’t do it, and that gave me more desire to prove them wrong.”

“Every since I was a kid, I always dreamed of going to New York. Madison Square Garden will always have a special place in my heart; it’s the mecca of boxing. I made great friends there, won championships there; New York belongs to me – a special place in my heart forever. I did surprise the world, didn’t I? (laughs) Everyone thought I was an old, washed-out fighter, that Moore for sure would put an end to my career. But I’m like a cat; I have nine lives. When I prepared myself to be my best, nobody could beat me. That night at the Garden, I was inspired and fully motivated. I was thankful to Davey for giving me the opportunity to fight him. I guess beating an old-timer would have been great to have on his resume, but when you are fighting with an old fox, you can’t be overconfident.”

“I asked (late president of the WBC) Mr. Jose Sulaiman, R.I.P., to speak to Barkley to give me the opportunity to fight him, and Mr. Sulaiman said that he would help me with the condition that if I lose the fight, I had to retire from boxing. So Barkley gave me the chance to fight him, because they told him I was already finished and it would be nice to add another legend to his resume. Also because he wanted to avenge Davey Moore’s defeat against me. They were close friends, and Barkley hated me for the way I beat Moore, R.I.P. When I saw Barkley, I saw how strong and big he was. I knew it was going to be a great challenge to beat him. But mentally and physically, even at 37, I felt very powerful during my training camp. I knew it was my last chance; I knew that everything was at stake. Mentally, I was so focused. I never saw myself getting defeated; it was never in my mind: What if I lose?’ Never! I went to Miami, Florida, to prepare myself in my training camp. I was sparring against 180-pounders. I was running with soldier boots on the beach, in the sand, to get my legs strong. I prepared myself physically so well that going the 12 rounds with Barkley was a piece of cake for me. Don’t get me wrong, he was a powerful puncher, strong as hell! But I was able to overcome him because of my experience of many years fighting. It wasn’t the first time I was against the ropes; I’ve been there before, and my mental toughness always came through for me. I had to use every trick in the book that night. It wasn’t easy, but at the end it was gratifying.”

Irichelle Duran helped coordinate and translate this feature. The Ring appreciates her assistance.