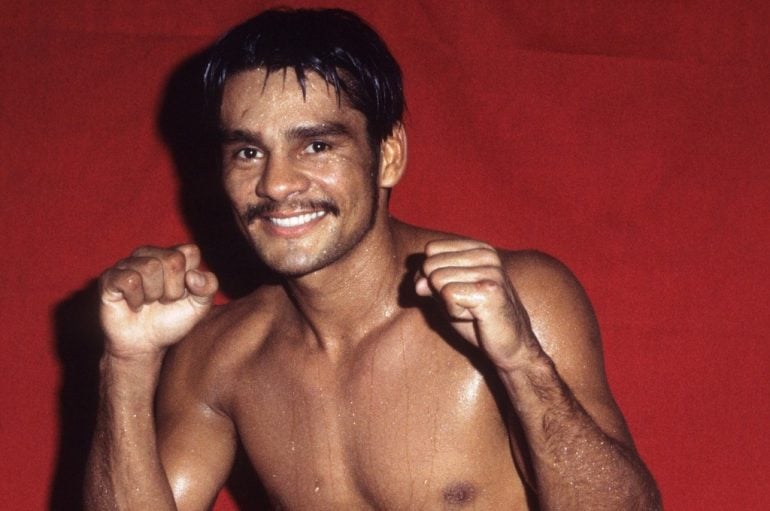 Photo from The Ring archive
21
Apr
by Tom Gray

Note: This edition of “Best I Faced” originally appeared in the January 2015 issue of The Ring Magazine.

Sitting down with a former world champion of Roberto Duran’s caliber is a surreal experience.

Duran was arguably the finest lightweight who has ever lived, won titles in three more divisions and was a first ballot Hall of Famer. And he didn’t simply win fights. He thrilled legions with a ferocious fighting style that overwhelmed the vast majority of his opponents when he was at his best.

“Manos de Piedra” stopped Hall of Famer Ken Buchanan in 13 rounds to win the WBA lightweight title in 1972. He made 12 successful defenses and unified that division with a 12th-round knockout of WBC titleholder, Esteban De Jesus, in 1978.

He then moved up to welterweight and stunned the great Sugar Ray Leonard by taking his WBC belt in 1980. He would go on to win titles in the junior middleweight and middleweight divisions and become one quarter of the “Four Kings” – with Leonard, Thomas Hearns and Marvin Hagler – in their unforgettable series of fights.

And he fought competitively for almost all of his remarkable 33-year career. He competed in five decades, finishing with a record of 103-16 (70 knockouts).

The legendary Panamanian is as revered now as he was at the height of his remarkable career. During pre-fight pageantry, during which former champions are introduced prior to title bouts, it is not unknown for Duran to receive a louder ovation than the participants. 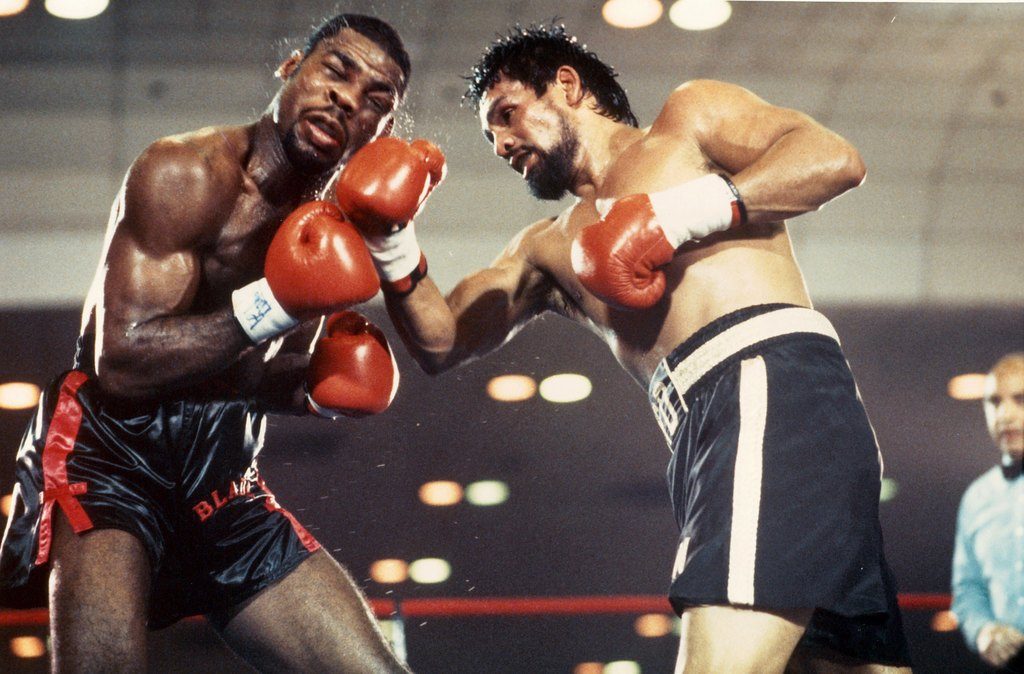 Duran at war with Iran Barkley in the 1989 Ring Magazine Fight of the Year. Photo from The Ring archive

Duran carries himself like a man who knows exactly what he has achieved. His health has gone up and down but, at 63 years of age, he appears fit and energetic with a zest for life these days.

A statue of Duran was erected in Panama seven years ago and he is immensely proud of his country’s continued warmth. It could be a local buying him a drink or a head of state praising him for his many accomplishments, it doesn’t matter; being recognized makes him feel good.

Hollywood has also gotten in on the act.

A film titled “Hands of Stone,” starring Edgar Ramirez, Robert De Niro and Usher, will be in theaters next year (Editor’s Note: The movie goes on general release on Aug. 26).

“I’m happy that they’re making a movie about my life,” said Duran, looking a touch embarrassed by the fuss. “It’s not out for a while, so hopefully the people will get more and more excited as we get closer to a release date.”

The film surely will bring back wonderful memories of one of the sport’s greatest figures, who graciously agreed to discuss the best he faced in 10 key categories.

BEST SKILLS
Ken Buchanan: Buchanan was one of the great lightweights when it came to tactics and skill. His intelligence made him very difficult to beat even though he wasn’t a very strong opponent. Sugar Ray Leonard was faster and stronger but Buchanan had tremendous skills.

BEST JAB
Buchanan: He was tall, boxed well and his lateral movement was extremely good. Buchanan’s jab was difficult to deal with because he threw it on the move.

BEST DEFENSE
Buchanan: He was hard to hit cleanly. I was very young, lacked experience, and Buchanan had been world champion for a long time. A lot of people will expect me to say Wilfred Benitez or Leonard when it comes to defense but I wasn’t prepared properly for Benitez or the Leonard rematch. Davey Moore, who I beat easily, knocked Benitez out so there’s no comparison there. I was coming into my prime against Buchanan and he made me miss often.

BEST CHIN
Marvelous Marvin Hagler: I hit Hagler with a lot of punches and he just kept coming. I didn’t find him as skillful as some of the opponents I faced but he was the toughest.

BEST PUNCHER
Esteban De Jesus: De Jesus was the first opponent to knock me down and he had me down again in the second fight. When I lost to Thomas Hearns I was drained from losing weight too quickly, and that had a bad effect on me. Hearns got me with a great punch but I could have performed far better in a rematch. Marvin Hagler, who is a good friend of mine, told Hearns the only reason he knocked me out is because I wasn’t at my best.

FASTEST HANDS
Sugar Ray Leonard: He was the fastest fighter I ever fought but in the first fight I saw everything that was coming at me.

FASTEST FEET
Buchanan: At lightweight the opponents were much swifter on their feet and, back then, we were boxing in 15-round fights. Buchanan always kept on the move but I caught up with him eventually. That victory means a lot to me.

SMARTEST
Leonard: It’s hard to give you one name but Leonard stands out because he made adjustments during fights.

STRONGEST
Hagler: It was an extremely close fight but he got me tired late. Even though I built myself up to middleweight, Hagler was much bigger and used his strength on the inside. After making weight, a fighter rehydrates and there was a big difference there. Still, even when I was tired, Hagler couldn’t get me down. There was no way I was going to get the decision but some fans and reporters thought I’d done enough. Hagler had big American fights pending with Leonard and Hearns so there was a lot of money at stake.

BEST OVERALL
Leonard: I have to say Sugar Ray Leonard because look at what he did in his career after he lost to me. It takes a lot to come back from defeat and Leonard did it.

Special thanks to Jovanna Duran Orts (translator), Carl Holness and James Ward for their participation in arranging this interview.