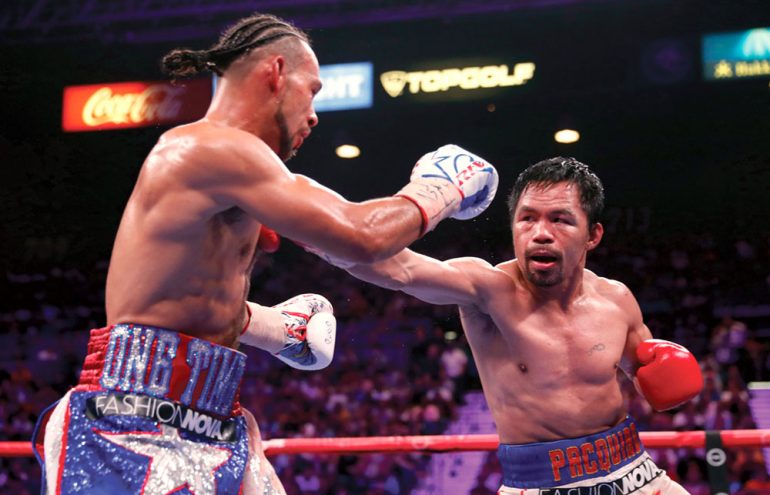 There could be as many as five opponents in the running to face Manny Pacquiao this summer.

The reigning WBA welterweight titleholder appeared on a local television network in the Philippines to discuss his future plans and revealed the top candidates for his planned July return.

“There are a lot of possible opponents,” Pacquiao stated. “Either Mikey Garcia, Errol Spence, or (Terence) Crawford.”

If those plans fail to come to fruition, the legendary eight-division world titleholder also confirmed that there were backup plans in place.

“There are boxers from Canada and Mexico that want to fight with me,” he said.

Garcia (40-1, 30 knockouts), 32, of Moreno Valley, California, who has won world titles in four weight classes, is coming off a solid performance against Jessie Vargas, who he floored in the fifth round en-route to a 12-round unanimous decision on Saturday at The Ford Center at The Star in Frisco, Texas.

Errol Spence Jr. (26-0, 21 KOs), 30, of Desoto, Texas, outpointed Shawn Porter last September to unify two belts at 147 pounds. But just over a week after his win, Spence was involved in a horrific one-car collision, crashing his Ferrari while under the influence. He miraculously survived with only a few facial lacerations and is expected to fight again around May or June.

Crawford (36-0, 27 knockouts), 32, of Omaha, Nebraska, last fought in December, when he stopped two-time Olympian Egidijus Kavaliauskas in the ninth-round of a fun fight. Although Crawford has won world titles in three divisions, he has struggled to land a notable dance partner in recent times.

Pacquiao did not mention the Canadian and Mexican fighters who are potential candidates to step into the ring with him. But the two Canadians who are eligible to fight for the WBA title at time of writing are the undefeated Custio Clayton (18-0, 12 KOs), 32, and Mikael Zewski (34-1, 23 KOs), 31, who both hail from Quebec.

Clayton, a six-time Canadian amateur champion, represented his nation at the 2012 Olympics, where he was eliminated in the quarterfinals.

Zewski, who had an amateur record of 138-29 and won a bronze medal at the 2007 Canada Games, has won eight bouts in a row since dropping a unanimous decision to former prospect Konstantin Ponomarev in May 2015.

There are no fighters ranked within the top 15 from any recognized sanctioning body that hail from Mexico but Josesito Lopez, who was outpointed by Keith Thurman in January 2019, prior to Pacquiao’s split decision victory over the previously unbeaten American the following July, is a possibility.

When asked to narrow his choices down to two opponents, Pacquiao did not hesitate.