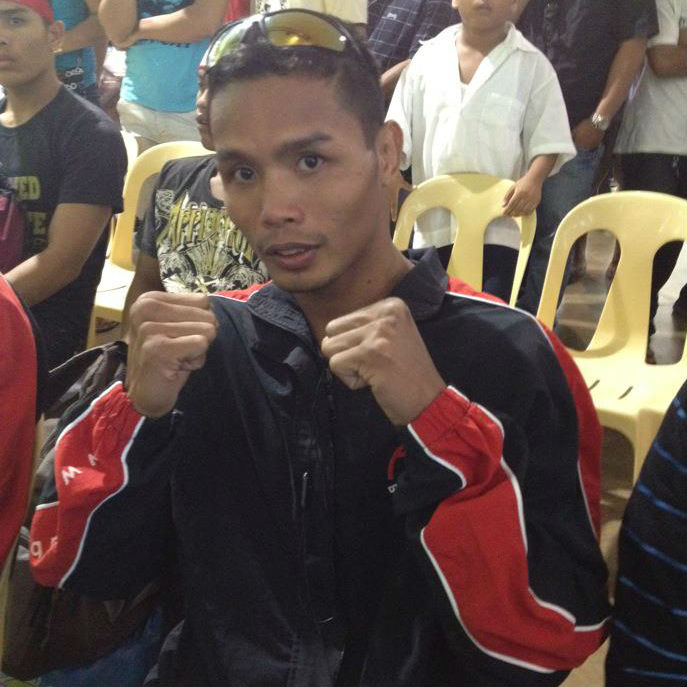 Despite his career ups-and-downs, the 25-year-old from Candijay, Bohol, Philippines remains a potent box office force, selling out venues throughout the provincial Visayas region. Higher-regarded stablemates Donnie Nietes and Milan Melindo pale in comparison to the drawing power of “Boom Boom”; ALA Promotions President Michael Aldeguer think his appeal is simple.

“He comes to fight,” said Aldeguer, Bautista’s promoter. “He’s easy to understand. You don’t see a scientific style, he just comes in and throws his punches, gets hit, he can be knocked out or he knocks out his opponent. He’s just really exciting.”

Bautista’s (32-2, 24 knockouts) popularity will be on full display Saturday night when he faces Genaro Garcia (10-11, 8 KO) of Mexico City, Mexico in his first appearance in his home province of Bohol at the Carlos P. Garcia Sports Complex in Tagbilaran City. The venue, which normally hosts soccer matches, can seat 50,000; 50,000 are expected to show.

The promotion hasn’t been without issues. ALA Promotions reached out to Garcia believing they were getting “Poblanito” Garcia, a three-time title challenger who had given credible efforts against Hozumi Hasegawa and Toshiaki Nishioka. Instead, they were presented with “Panterita” Garcia, who has been knocked out in all 11 of his defeats. A rep with the promotional outfit claims they were duped by a Mexican contact into believing they had “Poblanito”.

To add insult to insult, Garcia stepped on the scales at 132 pounds on Friday afternoon, four pounds over the contracted weight of 128. Garcia had two hours to lose weight but came back almost immediately claiming that he couldn’t shed the excess weight. Garcia was hit with a 20% fine on his $6,500 purse and will have to wear 12 ounce gloves.

Bautista, who weighed 127.5, will be allowed to wear the standard 8 ounce gloves.

In many ways, Bautista has served as a cautionary tale for unrealistic expectations. Following the emergence of Pacquiao during the middle part of the last decade, it was Bautista whom many looked towards Bautista to follow in his steps as “the next Pacquiao”. Those hopes were dashed when, in 2007, a 21-year-old Bautista was stopped in one round by Daniel Ponce de Leon in his first and only title opportunity.

Bautista would win three straight before losing to veteran Heriberto Ruiz the next year. Bautista was still maturing as a fighter, but the hype that had preceded him was coming back to haunt him.

Aldeguer says that the story behind his inconsistencies has seldom been told.

“What a lot of people don’t realize is, he had a major injury in his left wrist,” said Aldeguer. “They had to open up his hip to get a hip bone and transplant it in his wrist. When he fought Ponce de Leon, for two weeks before he couldn’t spar. When he fought Ruiz, he had an injury and had to replace the bone in his wrist. A lot of people don’t realize that his power is from his left hand. His jab is from his left, his uppercut is his left. Now he’s gaining ground and he’s as good as new.”

Bautista has since avenged the loss to Ruiz last year and is riding a six fight win streak since his last setback. He says a fire still burns in his stomach to avenge his first defeat to Ponce de Leon. Bautista believes that, now that he has matured, he is better prepared to face the comebacking former champion.

“We’re going to see how his progress is and then we’ll look for bigger fights,” said Aldeguer. “He’s been training in the gym on his defense, but it all goes out the window once he’s in the ring. It makes him very exciting. We’re looking to fight top contenders later this year. He’s number five in the IBF, number one and two are vacant. We may be fighting for an eliminator later this year.”

Bautista is a realist. He’s been knocked down, he’s been knocked out. He knows the fickle fortunes of the sport as well as the glory of having the hopes of his supporters riding on his shoulders. 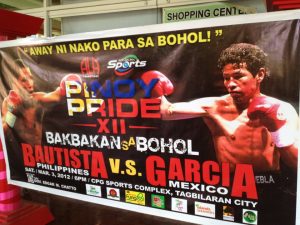 A Bautista vs. Garcia poster at Island City Mall in Tagbilaran City, Philippines, which features a different Genaro Garcia than the one who showed up in Bohol. Photo by Ryan Songalia

Thinking of his future, Bautista has invested in mass transportation vehicles, most specifically tricycles (motorcycles with side cars for passengers driven locally) and jeepneys (small bus-like vehicles that are ubiquitous in Filipino culture).

Bautista has three drivers under his employ, but when he isn’t training, it isn’t uncommon for him to drive some of the routes in the jeepneys himself.

“I had passengers from Manila that got angry at me because I’m a very slow driver,” admitted Bautista. “I tried to explain, ‘I’m a new driver, I can’t do faster.’

But many passengers recognize him, making for a unique commuting experience.

Another of his investments, a five-hectare rice farm, was inspired by his childhood. Both of his parents were farmers, and with some of his purse money he bought his parents a bigger farm. Bautista worked on his family’s farm from the age of nine.

“I know we’re not going to stay long in this sport, so I want to invest for the future,” said Bautista.

Ryan Songalia is a member of the Boxing Writers Association of America (BWAA) and contributes to GMA News and the Filipino Reporter newspaper in New York City. He is also a member of The Ring ratings panel. An archive of his work can be found at www.ryansongalia.com. Follow him on Twitter: @RyanSongalia.