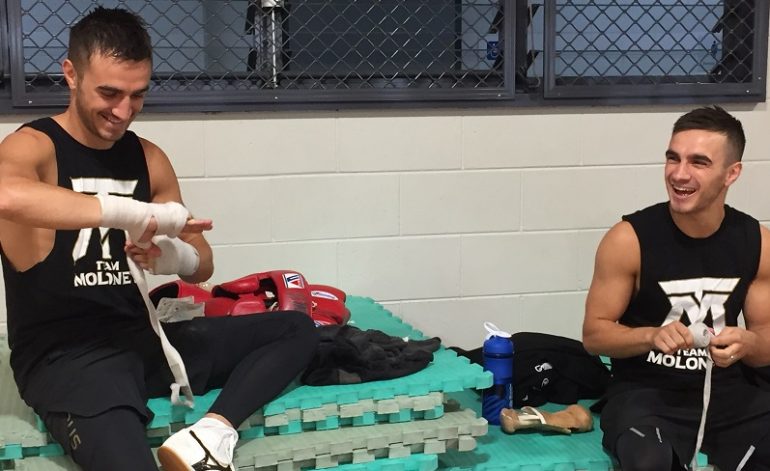 Twin brothers Jason and Andrew Moloney enjoyed a successful 2019 and positioned themselves for world title fights this year.

Jason Moloney (20-1, 17 knockouts) rebounded from a split decision loss to Emmanuel Rodriguez in an IBF bantamweight title fight in October 2018, with three stoppage wins in his homeland.

Andrew Moloney (21-0, 14 KOs) kicked off his year going to Chile, stopping Miguel Gonzalez in eight rounds in a WBA world title eliminator. Andrew, who is younger by one minute, has stayed busy with two more wins, the later stopping Elton Dharry in nine rounds for the WBA interim title.

Their manager, Tony Tolj, who signed the brothers with Top Rank last year, was keen to give an update on what the two brothers have in the works.

Jason, who is rated No. 6 at 118-pounds, is in the thick of things in the talent laden bantamweight division and seeking a second world title opportunity.

“We are waiting on Top Rank for the next move,” said Tolj. “The division is very busy with the WBC champion [Nordine] Oubaali and [Nonito] Donaire set to clash and IBF, WBA super champion Naoya Inoue and WBO champion John Riel Casimero looking for a super fight.”

Jason is looking to return to another big fight, having ran Rodriguez so close in his first title opportunity.

“Unfortunately, right now the champions at 118 are pretty tied up,” he explained. “I would really love to fight the winner of any of those fights.

“I like to stay active, I’m constantly in the gym making sure I’m always improving and becoming a better fighter and I don’t want to be sitting on the sidelines.

“The fight that makes the most sense for me at the moment would be Joshua Greer Jr. We are both with Top Rank and we are both very highly rated in all four major sanctioning bodies. I think the winner between us definitely deserves to be next in line for a world title shot and I’m confident that will be me.

“I think this is going to be a really big year for me. I want to test myself against the best and I’m working very hard to make sure that this is the year that I become world champion.”

Last Thursday it was announced that the WBA beltholder Kal Yafai would face Roman Gonzalez on February 29. Neither, Moloney, Tolj or Top Rank were willing to comment on the status of Andrew Moloney’s no. 1 contender status with the WBA.