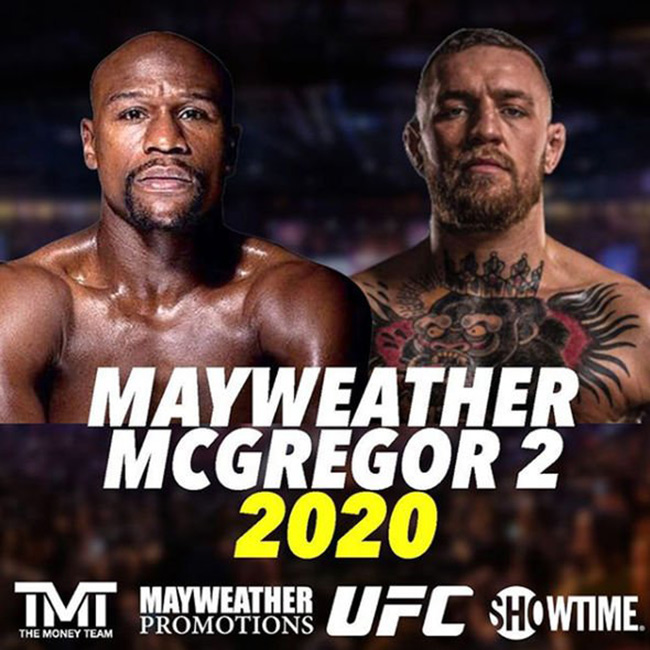 FIGHTER OF THE DECADE – WE’VE GOT ONE MORE YEAR!

Best wishes to you and yours in this young year. The BWAA got it wrong naming Floyd Mayweather the fighter of the decade.

It’s not because I’m not a Floyd fan, (I’m not) or that any other fighter deserves the accolade.

As always, thanks for all you do for the boxing community and the sport. The March 2020 issue came yesterday and it’s a great read. – Ken Kozberg, Oakham, MA 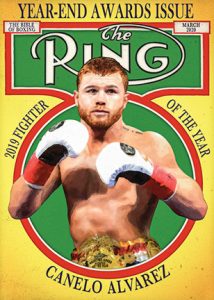 Thanks for the kind words, Ken. I thought the March 2020 issue (our 2019 awards edition) came out quite nice – with two, count ‘em, TWO covers (collect ‘em both via The Ring Shop) – which is saying something given that we finished it up over the Christmas/New Year’s Eve break. Major props must go out to the Editorial Board, all of our contributors, the cover artists (Ian Hughes and Richard Slone), our Controller and Circulation Director, and our new printer (Cenveo).

Even though my personal choice for Fighter of the Decade is Roman “Chocolatito” Gonzalez, AKA the past and future KING, and I’ve never been accused of being a Floyd-hugger, I have absolutely no problem with Floyd Mayweather Jr. being voted FOTD by the Boxing Writers Assoc. of America (be it 2010-2019 or 2011-2020). The future hall of famer is worthy despite only fighting for half the decade.

However, if what you say is true about the current decade running from 2011-2020 – and I had no idea, by the way, it’s nice to learn something new every week – I think it gives Mayweather’s two chief rivals and fellow FOTD candidates, Canelo Alvarez and Manny Pacquiao, one more year to outshine their cautious nemesis and edge him for FOTD honors in the court of public opinion.

What if Canelo knocks out GGG this year? What if Senator Pac upsets Errol Spence Jr. this year? Think about it. If Mayweather returns this year, as he’s been overtly hinting at recently, it will likely be a rematch with Conor McGregor. ‘Nuff said. That’s not going to add to his boxing legacy.

Just saw that Mayweather is fighting McGregor in a rematch this year, or at least he teased it. My question is, what’s the point? Yes, they’ll make a lot of money, but why would anybody other than dumb UFC fans think this is even a competitive fight?

The first one was somewhat compelling because we wanted to see how McGregor would perform in the squared circle but now that that’s out of the way there’s really no reason for it. I just hope it’s not real and more Mayweather measuring the market and how much interest it would garner.

Allow me to state two things for the record: 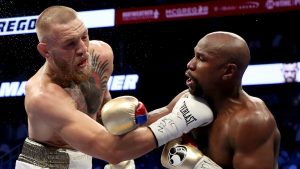 Gee, that was a shocking outcome

Just saw that Mayweather is fighting McGregor in a rematch this year, or at least he teased it. Floyd likes to tease, but I think he’s serious about this particular comeback. I’m sure he realizes that, at his age (he’s 42 going on 43), there’s a limited amount of time for him to be able to return to the ring at some semblance of his world-class form, even against MMA fighters.

My question is, what’s the point? Money (and attention) is the easy answer but I think it goes deeper than that. Mayweather was literally conceived to box. He was born into a boxing family and he began training in his craft and learning the family business as soon as he could stand. Boxing is what he does. He wants you to think that money defines him, but it’s boxing, and now that he’s had a few years away from it, he’s got the itch again – and I bet it’s BAD. However, his ego won’t allow him to pull a Roy Jones Jr.-style senior tour of humiliating no-hopers on under-the-radar show and getting KTFO by fringe contenders overseas. His ring return has to be a major PPV event that pays him the monetary equivalent of Fort Knox. And there’s nothing wrong that. BUT, his ego also won’t allow for the slightest possibility of him taking an “L.” In his mind (and the puny minds of his fanatical supporters) a loss will ruin his legacy. So, he’ll take McGregor over Pacquiao, Spence, Keith Thurman, Shawn Porter or Danny Garcia. It is what it is. He is what he is.

Yes, they’ll make a lot of money, but why would anybody other than dumb UFC fans think this is even a competitive fight? Let’s not insult UFC fans. Only dumb McGregor fans will fool themselves into thinking a Mayweather rematch would be competitive, and God Bless them. They support their hero no matter what, win or lose, rain or shine. Boxing fans, who jump on and off of fighter bandwagons more frequently than train-hopping hobos from the turn of the last century, can learn from those lunatics.

LOVED YOUR RESPONSE TO FILIP

I don’t get the Canelo hate just like I don’t get any fighter’s nuthuggers.

I’m not a big fan of his, but I give the guy his props.

He takes on whoever makes sense and doesn’t duck the tough fights.

Christ, can’t anybody just watch the fights and enjoy? – C.

Remember when boxing fans just anticipated upcoming fights, watched them, were entertained (or not), and then anticipated the next fight? Good times.

Floyd Mayweather won the Fighter of the Decade award. While I don’t agree with that decision, I’m not mad at all. He has a strong case (like other fighters too).

Now I’m much more interested in what we’re about to see through the next decade. The last three fighters of the decade (RJJ, Pac and Floyd) were terrific, superb fighters, who built great legacies. Thinking about this, what names do you think have the potential to do great accomplishments (win titles in some divisions, face and beat the best fighters of their generations), to the point of contending for the next FOTD award?

First, we have great names, who’s already more than established in the game, like Canelo and Inoue. Both are young (relatively in the case of Canelo), extremely skilled and well positioned for great fights. Although we never know how a boxer will do after 30-32 years old (the decline can be faster than people think), I can see these guys doing well for the next 5 or 6 years. Don’t think Crawford, Usyk and Lomachenko have enough time to think of being the greatest name of the 20’s.

Second, we have the good names that are coming up! Haney, López, Madrimov (I do really have great expectations about this guy), Garcia (although he is still unproven), Vergil Ortiz, Jaron Ennis, Shakur Stevenson, and even Dubois (if he improves a lot, what I think he can do). Other guys are very good too, like Colbert. All these guys are talented, and have a LOT of space to grow up through the next years. I would say other names like Kosei Tanaka will be in this competition, too. I even think the Japanese guy already deserves a spot in the mythical rankings.

What about you, Dougie? What names do you think have the most potential to have a terrific decade in the 20’s? (We have to consider politics, too)

How do you think Vitali would do against today’s Big Three of HW?

I think Dr. Iron Fist would beat all three (Wilder and Joshua by late stoppage, Fury by decision).

Regarding the boxers who have the most potential to be Fighter of the Decade for 2020-2029 (or 2021-2030 if the guy from the first email is correct – I have no idea; I’m too lazy and don’t give enough of a s__t to check it out), I agree with you that Canelo Alvarez and Naoya Inoue should be considered front runners. Both are complete, battle-tested fighters, both accomplished enough in the previous decade to merit FOTD award consideration, both are top 3-5 pound-for-pound players, and both are under 30 (the Mexican star is 29 and the Japanese star is 26). Both also have viable dance partners in multiple divisions; Canelo from 160-175, Inoue from 118-126. 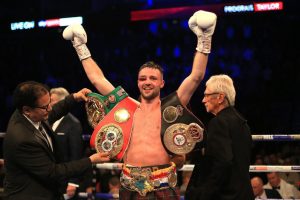 Underneath Canelo and Inoue, I’d place The Monster’s fellow WBSS tournament winner, Josh Taylor, and UK heavyweight prospect Daniel Dubois. Like Inoue, the 29-year-old Scotsman just signed with Top Rank, which sets him up for massive fights vs. fellow unified 140-pound titleholder Jose Ramirez and welterweight beltholder/P4P Player Terence Crawford. It’s a BIG “IF” if Taylor (16-0), The Ring junior welterweight champ, can prevail in those matchups, but if he does, he’ll be well on his way to FOTD. Meanwhile, Dubois (only 22, which is a baby for the heavyweight division, and 14-0) is in position to feast on the glamor division’s Big Three once they get a bit long in the teeth. (In fact, in a few years, the precocious Londoner will threaten to knock their long teeth out!)

Under Taylor and Dubois, I’d place Teofimo Lopez (22 years old, only 15 pro bouts, and set up to face Vasiliy Lomachenko this year), Shakur Stevenson (22, only 13 pro bouts, and ready to face Josh Warrington) and Devin Haney (21, 24-0), who already looks like a future world-beater at 135 and 140 pounds.

Under that terrific trio, I’d place Vergil Ortiz Jr. (21, 15-0) and Jaron Ennis (22, 25-0). For all we know these ultra-talented welterweights could engaging in multi-fight series that defines the next decade.

I’m looking forward to the next 10 years.