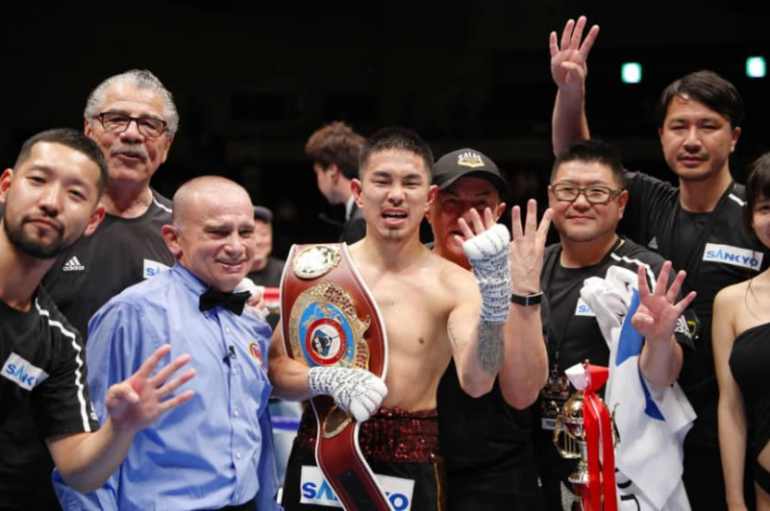 The Ratings Panel has love for the four-division titleholder from Osaka. Photo courtesy of japantimes.co.jp
26
Dec
by Anson Wainwright

Ioka, who is rated No. 3 by The Ring at 115 pounds, is keen to face his mandatory challenger.

“I’m very thankful to be in this position to defend the WBO junior bantamweight belt,” Ioka (24-2, 14 knockouts) told The Ring through interpreter Taku Nagashima. “Cintron is a very good young fighter with a very respectable amateur career, especially representing Puerto Rico in the Olympics. I look forward to a very good fight.

“I’ve studied his past fights and I’m very impressed with the different style he brings to each fight. I believe his biggest strength is being a fighter out of a very rich boxing history of Puerto Rico. In regards to weakness, he is just like all of us boxers. We are one punch away from getting knocked out.”

The significance of winning the vacant title in June, when he stopped Aston Palicte in 10 rounds, isn’t lost on him.

“It meant a lot to me since winning the fourth division title allowed me to experience what no Japanese [male] boxer has ever accomplished,” he said, brimming with pride. “I felt that all the years of hard work and sacrifices in life paid off.

To prepare for his latest challenge, Ioka has spent time doing physical training at the Haleo Gym in Japan before decamping to train under the watchful eye of high regarded Ismael Salas in Las Vegas in October.

On the undercard Kosei Tanaka defends his WBO flyweight title against Wulan Tuolehazi. Rumor suggests that Tanaka will move up in weight and face Ioka next year. However, the 30-year-old Japanese star is quick to play down the notion.

“I really respect Kosei Tanaka but I have not put much thought into fighting him,” Ioka said. “My thoughts are to hopefully fight for a unification title match next year.

“If I am lucky enough to achieve more than I already have, then I will think about that when the time comes. For now, I’m just thankful to be in this position in my life. But, of course, I have to defend the title against a Cintron first. So, first thing first.”

Cintron turned professional in 2017 after a successful amateur that saw him become the first boxer from Puerto Rico to represent the country at two separate Olympics. In part due to his vast amateur pedigree Cintron (11-0, 5 knockouts) has been fast-tracked. Last time out the southpaw comprehensively outpointed the more experienced Koki Eto to earn his title shot.