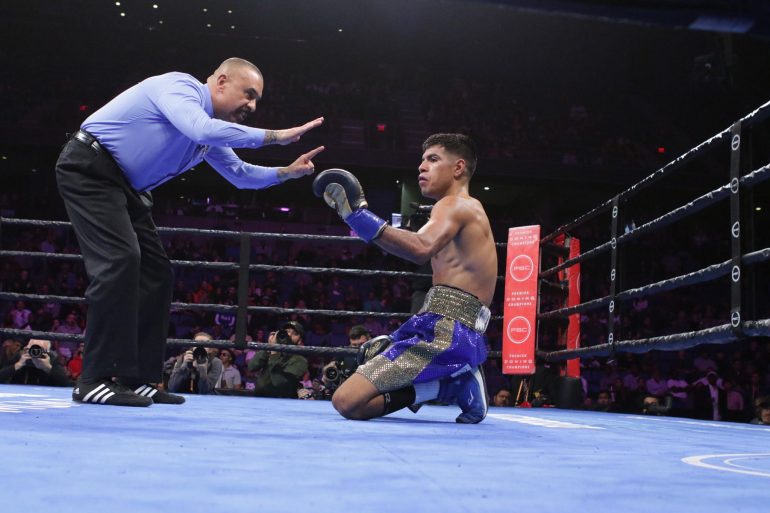 ONTARIO, Calif. – Rene Giron was not impressed by what lightweight prospect Karlos Balderas had done as a pro thus far. Not only did he want to showcase his skill-set Saturday night, but he also wanted to defeat the unbeaten Balderas.

Giron scored a huge upset victory, dropping the 2016 United States Olympian twice before ending matters in round six before a stunned crowd at the Toyota Arena.

Balderas was considered a blue-chip prospect who fought under the Ringstar Promotions/ PBC banner. He had dominated opposition since his pro debut in April of 2017, but was taking a step-up against Giron, who lost to Michel Rivera by unanimous decision in his last bout on June 21.

Despite giving up height and strength, Giron was able to get on the inside of Balderas’ guard, connecting with hooks to the head and body. Both fighters fought on equal terms as Balderas attempted to counter Giron’s offense.

Ummmm yeah, we're not sure how Balderas made it out of this round either… ?♂️ #HarrisonCharlo2 pic.twitter.com/CCDHSJWwbq

Near the end of the third round, Giron dropped Balderas with a left hook to the head. Balderas beat the count, but fell backwards and was held up by the corner advertisement after referee Ray Corona told him to walk towards him. Corona allowed the fight to continue to the shock of most in attendance.

Giron mounted another offense in round four, but Balderas threw and landed a right hand way below Giron’s belt-line. After being given time to recover, Giron was belt to continue, but the low blow looked like it had no impact on him as he continued to be the aggressor and find a home for more lead or counter left hooks to the head of Balderas.

Towards the end of the sixth round, Balderas was dropped again by another left hook to the head. Balderas was on his knees and stood up as referee Ray Corona waved the fight off at 2:59.

No coming back from this one! ?

Rene Tellez Giron drops Karlos Balderas a second time and this time it's all over! #HarrisonCharlo2 pic.twitter.com/5Tl3jpeH95

“After I knocked him down in the third round, I saw his eyes were rolled back like he was hurt, but he has the heart of a lion,’’ Giron said. “He didn’t want to lose his undefeated record in front of his people. When he got up, I was like, ‘Wow! He got up! He’s up!’ So I kept on him and left everything in the ring. I’m really happy. Karlos had said he fought with the best and he was an Olympian. Well, I fought a lot of people too and you see the result.’’

Balderas, who resides in Santa Maria, California, falls to 9-1 (8 KOs).