Terence Crawford on potential fight with Shawn Porter: ‘That’s going to be up to us’ 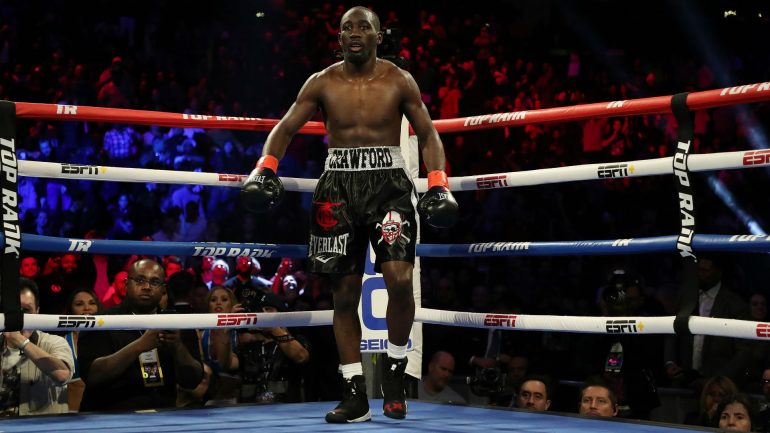 How would Terence Crawford fare vs. Jermell Charlo?
16
Dec
by Sporting News

Terence Crawford could go up against Shawn Porter in his next fight — but only if the two welterweights agree to put their friendship to one side and face each other in the ring.

After successfully defending his WBO title against mandatory challenger Egidijus Kavaliauskas in New York, the undefeated Crawford was unsurprisingly asked in his postfight news conference about future opponents.

A unification fight against Errol Spence Jr. is not in the pipeline, as the IBF and WBC champion is still recovering from injuries suffered in a car crash in October.

Manny Pacquiao holds the WBA belt, but Porter — who lost narrowly on points to Spence this year — has been mentioned as a possibility for 2020. Promoter Bob Arum talked up the bout prior to Saturday’s clash with Kavaliauskas, though Crawford insists it will be down to the fighters to decide if it will go ahead.

“Right now, we haven’t had a discussion [about] whether or not we fight. Right now, I’m not even thinking about the fight, I’m not worried about that fight, it’s not even in my head right now.

He added: “My goal is to get all these fighters that say I’m running inside the ring with me.”

Crawford appeared to be in a spot of bother when caught in the third round by Kavaliauskas, though he insisted he was not hurt.

“Bud” went on to force a stoppage in the seventh, extending his professional record to 36-0 and further enhancing his case to be considered the best pound-for-pound fighter in the world.

“I showed that I can fight without boxing, that I can take a punch. I walked through a lot of his shots and made it a fight as well, when he was trying to box,” he said.

“I need those meaningful fights, the fights that everyone wants to see. That would help my legacy a long way.”