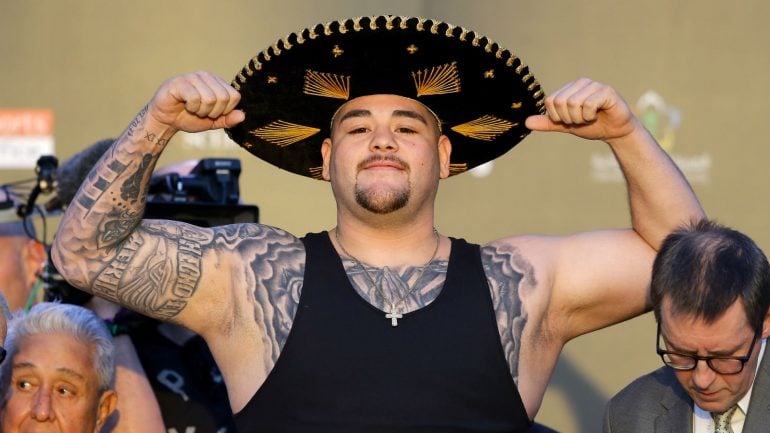 Looks like that smile has been affixed, for maybe 24 hours, on Anthony Joshua’s face after he proved doubters (a legion of them) wrong. 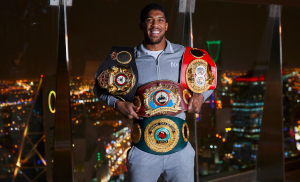 The Brit, many thought, had been shown to be fatally flawed, his chin checked and wrecked and his brain battered to the point that self doubt would be crippling. Didn’t turn out that way, as in Saudi Arabia Joshua showed mental strength to tamp down doubt and also come up with a game plan and stick to it, to superb effect.

“Master class,” some pundits and fans called the 12 rounder in Diriyah. Ah, but others weren’t so complimentary. They noted that his foe was a shell of a man. Or, rather, a larger facsimile of the being who shocked the world June 1. Ruiz, some sniped, looked like he’d been training for the Dec. 7 rematch by entering hot dog eating contests.

And those that aren’t hard core AJ rooters pointed out that the master class occurred against an athlete who was handicapped by corpulence.

Ruiz, he probably didn’t do himself favors, for those inclined to give him a pass, human nature being what it is. He lobbied overly hard for a third fight, and while he did apologize to his team and trainer and fans for not taking his prep seriously, it is hard for some not to think that in the back of his mind, he knew he had a cushy fall-back position. Him and AJ are now 1-1, and a third fight would break the tie.

Ruiz’ own pop had a good handle on what happened in Saudi. Andy Ruiz Sr. told Boxing Social that he told the boy a month ago that he was too heavy.

“That was the problem, he was overweight,” dad said. Ruiz was “290 something after the weigh in.” He’s better in the 240s and 250s, but he did real good at 268, so he thought he could add even more and still be OK, he continued. The son was enjoying fame, and getting into a Rolls Royce mentality. He’d stay with friends, rather than being close to family. “It was the worst camp,” the dad said. This was real talk, and welcomed, to be honest.

And, dad was asked, is he sure Andy won’t continue to overspend and self indulge. Andy will buy land and dad will build houses, so that will be OK…but he said Andy shouldn’t be buying more cars. “It’s a good lesson he’s gonna learn. [Andy] said, ‘Everything you told me, you were right,'” Senior said.

If AJ doesn’t want that third fight, dad said Andy will be fine, there are other solid fights to make. He said AJ fought smart, the right way for him to win. “He did the right thing and Andy did the wrong thing,” the father said. 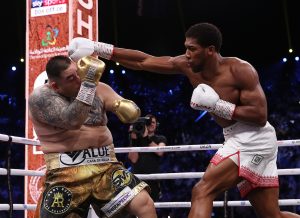 During the fight, Andy told his dad that he felt like he couldn’t throw punches. Next time, there will be less time with friends, and they will get a conditioning coach, and get to the 250s.

Bottom line, Ruiz has gone from zero to hero to zero again…though, he might remind you if you described him thusly, speaking of zeroes my bank account is full of them. “No more Rolls Royce, so he’ll be back,” dad said, chuckling, to close.

We continue to assess and ponder that 12-round clash, and make sense of its meaning. And so do these fighters. After the outing, AJ was quoted as saying he thought THIS Ruiz was a better Ruiz than the one he met in June. That defies belief or even the consideration of hearing AJ explain how the heck he came to that determination.

OK, so you slept on it, and sifted info today: Thoughts 24 and 48 hours later on #RuizJoshua2?