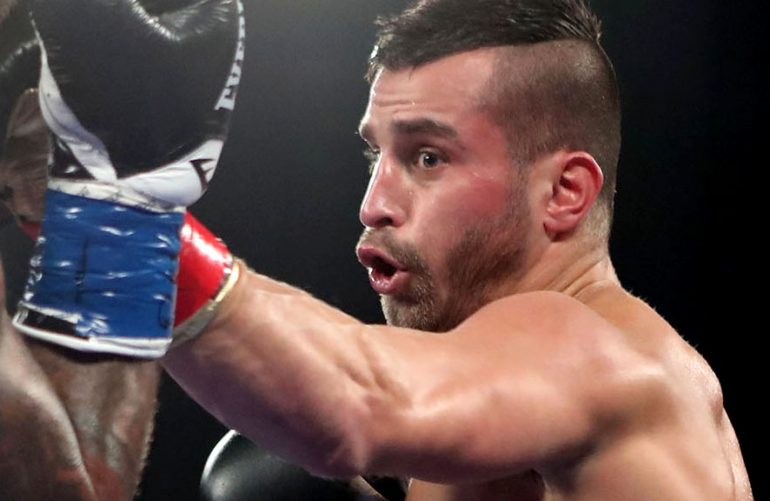 Lemieux began in typical aggressive fashion but was hurt and dropped with a minute left in the first round. Bursak looked to end matters driving Lemieux backwards into the ropes in the follow up but somehow Lemieux was able to survive the tumultuous round.

“I wasn’t worried, I came back, for me it was a flash knockdown,” Lemieux told The Ring afterwards.

Although the proud Canadian enjoyed a better second round, Bursak was still having his moments. As Lemieux grew into the fight suddenly he was caught and dropped in the fifth round for the second time in the fight. This time he fired back and by the round’s end he had backed up Bursak and even found time to wave to the crowd.

Lemieux continued to look for openings and found the perfect one when he landed his trademark left hook in the sixth. Bursak was able to see out the round but his face was getting marked up, particularly his right eye.

The pace slowed over the next couple of rounds before both men fought each other to a standstill in a grand final round. When the scorecards were read Lemieux got the nod 94-93 (twice), while the other judge voted for Bursak 94-93.

Lemieux said he had some ring rust, which hindered his performance.

“I won the majority of the rounds, he fought a good fight but my shots were clear,” Lemieux (41-4, 34 knockouts) said at the post-fight press conference. “I started a bit slow but I finished hard and I won the late rounds.

“I came in and I was inactive since [Gary] O’Sullivan [in September 2018]. You’ve got to be active and you’ve got to keep fighting. The rest hit me and as the rounds passed I was waking up and getting back in the fight. I wanted to do a lot better and more for the fans.

The 30-year-old puncher, who is now campaigning at super middleweight, felt comfortable at the new weight.

“I felt good, it’s a big difference,  eight pounds, it does make a difference,” he admitted. “I think it was more the ring inactivity and today I broke the ice. It’s boxing sometimes you don’t have the perfect night that you want but I won the fight.

Camille Estephan of Eye of the Tiger Management, which promoted the event, is looking forward to the future.

“We’re gonna be sure he’s healthy,” said the promoter. “It’s going to be a quick return to the ring, we don’t want to be inactive, he couldn’t find his timing and that’s everything in boxing. You can spar all you want, it’s not the same as a fight. After the fifth round we saw David Lemieux but it already a major war.”

Lemieux hopes he can secure a fight with one of the biggest names in boxing.

“We want to get active and the guy we want is Canelo,” he said.

Fearsome heavyweight Arslanbek Makhmudov (10-0, 10 KOs) laid down a marker for the rest of the division stopping former WBC titlist Samuel Peter (38-9, 31 KOs) in the opening round.

Makhmudov, 30, hurt Peter and dropped the Nigerian veteran but Peter’s credit he got up, and although he tried to continued the Russian-born Montreal resident was in no mood to let the fight last much longer and blasted former beltholder with a big right hand that forced him to stumble into his corner. Referee Steve St-Germain jumped in and halted the action at 2:23 of the first round.

Kean, who represented Canada at the 2012 Olympics, had things in hand throughout the bout but was going through the motions and was booed in the eighth round. Finally, Kean hurt Liakhovich late in the fight prompting referee Alain Villeneuve to intervene and bring proceedings to a close.

The 21-year-old Montreal-based Kazakh largely had things his own way against the tough Argentinean import and appears to have the ability to become a world champion. He has poise that belies his tender years, impressive movement and fight ending power.

Mathieu Germain (18-1-1, 8 KOs) rebounded from the first loss of his professional career in September with an eight round unanimous decision over Mexican trial-horse Gilberto Meza (11-9-1, 7 KOs). Germain fought off the dogged Meza and was awarded the wide decision on the scorecards 80-72 (twice) and 79-73 in their junior welterweight bout.

Super middleweight Lexson Mathieu (8-0, 7 KOs) caught the eye with a dominant performance against hard-nosed Rolando Paredes (16-9-2, 11 KOs). Mathieu thrilled the local support, dropping the Mexican and forcing referee Michael Griffin to intervene at 1:11 of the eighth and final round.