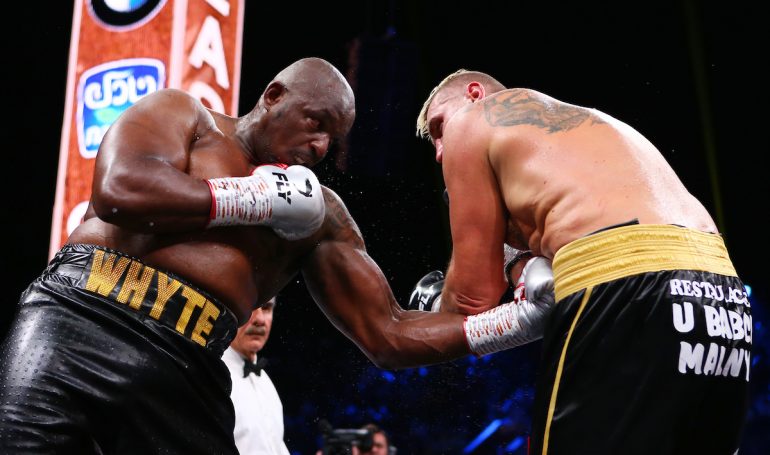 Whyte (left) goes to the body of Wach. Photo by Dave Thompson
07
Dec
by Tom Gray

With the UKAD drama behind him, top heavyweight contender Dillian Whyte got back to work and scored a 10-round unanimous decision over former heavyweight title challenger Mariusz Wach at the Diriyah Arena in Diriyah, Saudi Arabia. The official scores were 98-93, 97-93 and 97.93.

Whyte, weighing a career-heavy 270 pounds, labored through most of the contest, but his class got him over the line. The Jamaican-born Londoner got off to a good enough start, peppering Wach to head and body with the left hand, but he was tired by the midway point and let his opponent back into things.

“I boxed nowhere near my standard,” said Whyte (27-1, 18 knockouts) in his post-fight interview with Sky Sports. “People have been screwing me left, right and center for the last six months. My mind hasn’t been in the right place, but I carried on training and took this fight on three weeks’ notice.”

Ultimately, this was nothing more than a shakeout for Whyte, who has been through a torrid time. The WBC removed him as their mandatory challenger when confidential information was leaked in relation to a failed UKAD test. On Friday, however, it was disclosed that the result “was consistent with an isolated contamination event and not doping”.

Whyte, who is rated No. 5 by The Ring at heavyweight, will move on to much bigger things in 2020.