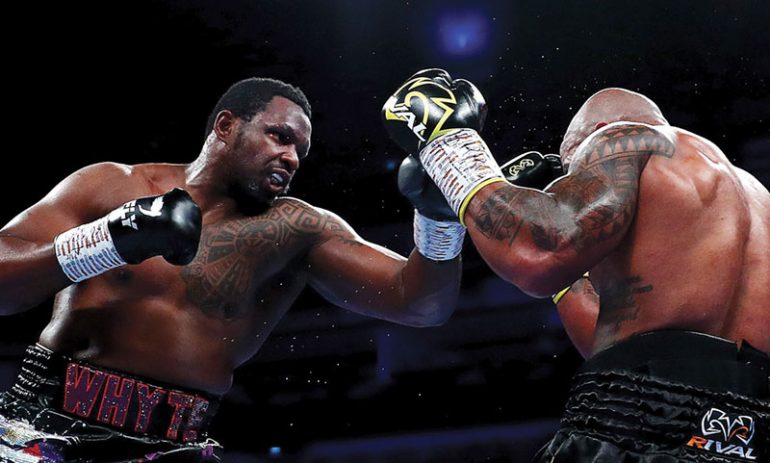 The 10-round bout will take place at the Diriyah Arena in Diriyah, Saudi Arabia. The fight will precede the main event bout between unified world heavyweight titleholder Andy Ruiz and Anthony Joshua.

Whyte (26-1, 18 knockouts), who is ranked No. 5 by The Ring, made headlines on June 17, when United Kingdom Anti-Doping (UKAD) announced Whyte tested positive for Dianabol, a banned substance. Whyte was still allowed to face previously-unbeaten Oscar Rivas, overcoming a knockdown in round nine to win by unanimous decision in his hometown of London. In a bizarre twist, the Voluntary Anti-Doping Agency (VADA) informed both Whyte and Rivas on Aug. 1 that tests done before and after the fight for banned substances came back negative.

The 31-year-old has won his last 10 bouts since suffering the only loss of his career at the hands of Joshua in December of 2015. Whyte’s most recent victories are against Dereck Chisora (twice), Robert Helenius, Lucas Browne, and Joseph Parker.

Whyte believes he is on the cusp of fighting any of the world titleholders in 2020.

“I’m delighted to be fighting in Saudi Arabia against Mariusz Wach,” said Whyte, who was born in Jamaica. “He’s probably got one of the best chins in the heavyweight division. I have been training and working hard to fight so it’s great to get a date and it’s very exciting for me to be fighting somewhere different like Saudi Arabia. I want to fight in different places and different settings and this card has the biggest heavyweight fight on it that we have seen in years.”

“I’m just going to keep chasing the world titles, so if I keep winning, then I hope to land that world title shot in 2020. That’s the plan for Dec. 7.”

Wach (35-5, 19 KOs), who resides in Krakow, Poland, has won his last two bouts by knockout over mediocre opposition. His recent success snapped a three-bout losing streak within a span of 18 months, with losses to Jarrell Miller, Artur Szpilka, and Martin Bakole.

In his most high-profile fight of his career, the 39-year-old lost by unanimous decision to then-unified world heavyweight titleholder Wladimir Klitschko in November of 2012.

Also on the Matchroom Boxing card:

– Michael Hunter (18-1, 12 KOs) of Las Vegas will square off against Russia’s Alexander Povetkin (35-2, 24 KOs) in a 12-round crossroads bout between heavyweight contenders.

– Heavyweight prospect Filip Hrgovic (9-0, 7 KOs) of Croatia will face gatekeeper Eric Molina (27-5, 19 KOs) in a 12-round bout. Molina, who resides in Weslaco, Texas, has fought sporadically recently, fighting once earlier this year after not fighting in 2018.

– Former amateur standout Mahammadrasul Majidov (1-0, 1 KO), who is originally from Russia and now resides in Baku, Azerbaijan, will square off against Britain’s Tom Little (10-7, 3 KOs) in an eight-round bout.

– Super middleweight Diego Pacheco (7-0, 6 KOs) and Ivan ‘Hopey’ Price, who will be making his pro debut, will fight in separate bouts.