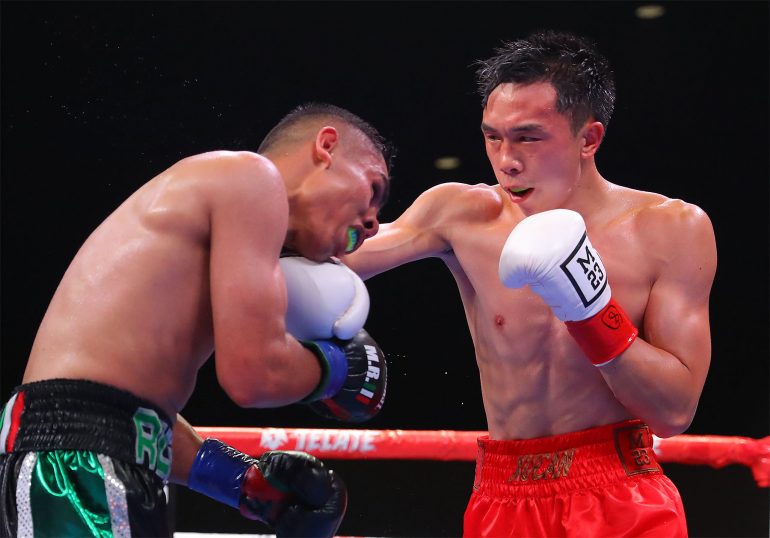 INDIO, California – Xu Can can do.

The lopsided scorecards did not reflect the competitiveness of the fight, as both fighters connected with vicious combinations throughout the DAZN-streamed co-main event from Fantasy Springs Casino.

Robles was taking a significant step-up in opposition, but more than held his own during the first half of the fight. The 25-year-old counterpuncher, who notched two split-decision victories earlier this year, landed the more-effective punches, particularly the straight and counter right hands to the head.

By round six, Can swung momentum his way, throwing combinations that finished with left hooks to the body. Can also mixed his combinations well, throwing three-four punch combinations, connecting at least twice to the head and body.

Sensing he was down in the fight, Robles made a stand in Round 10, landing the more-telling blows during exchanges in the middle of the ring.

During the championship rounds, both Can and Robles traded vicious hooks and crosses in the center of the ring. Both went at it as the crowd stood on their feet, applauding both fighters as the final bell sounded to end the fight.

Robles, who resides in Los Angeles, suffers his first loss as a pro and drops to 18-1, 8 KOs. 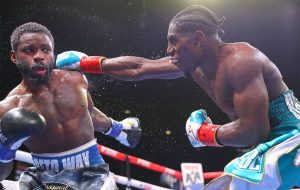 The fight was a rematch of their December of 2016 clash, where Ellis scored a spectacular opening round knockout of Gomez. Saturday night’s fight was anti-climatic than what happened almost three years ago as Ellis dominated the action after the first two rounds.

During an exchange in round five, referee Ray Corona sternly warned each fighter, Ellis for leading with his head and Gomez for attempting to butt Ellis.

As the bout progressed, Gomez was relegated to throwing one punch at a time from his back foot. His punch output continued dropping each round, while Ellis remained on the outside, connecting and then moving out of Gomez’s range until the final bell.

Morales was the more-effective fighter from the opening bell, but had to hold off a late rally by Olguin, who resides in Guadalajara, Mexico. Olguin (14-13-3, 9 KOs) was busier, but the unbeaten Morales, who recently signed a promotional contract with Golden Boy Promotions, outboxed Olguin until the final bell.

Junior featherweight prospect Alberto Melian dropped Juan Kantun (21-9-3, 15 KOs) en route to second round knockout victory. Melian (6-1, 4 KOs), who was coming off a decision loss to Eduardo Baez in his last bout on July 18, battered Kantun in a corner until referee Ray Corona stopped the bout at 1:36. Melian stated after the fight that he will now campaign as a bantamweight.

Baishanbo Nasiyiwula of China defeated Mexico’s Saul Corral (30-15, 20 KOs) by unanimous decision over eight rounds. All three judges scored the bout 80-72 in favor of Nasiyiwula, who goes to 16-3-1, 6 KOs.