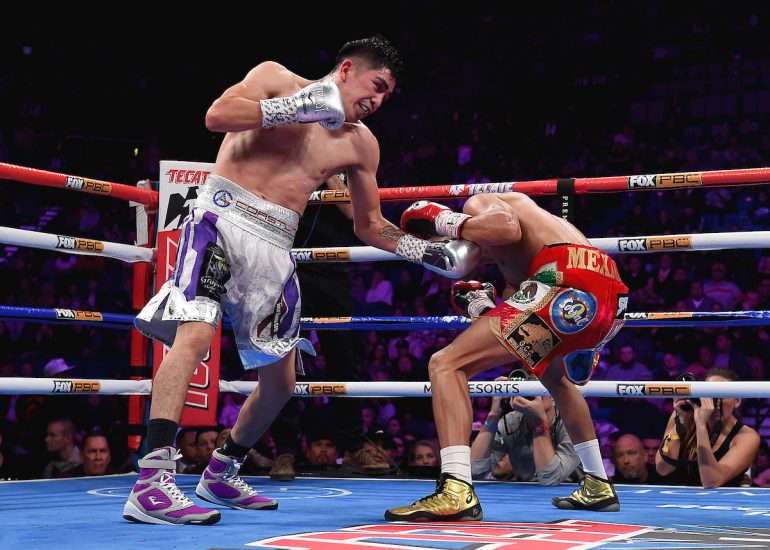 “Winning this title means the world to me,” Santa Cruz said. “This is all for the fans who support me. I didn’t feel myself today and didn’t perform the way I wanted to. I’m going to get back in the gym and get a big fight in 2020.

“I’m glad I got the victory. Miguel is a good fighter, he gave me a tough fight and he proved he’s not a pushover. We put on a great battle. I want to stay at 130. We want the big fights in 2020. I want Gervonta Davis or Gary Russell Jr.. I want to show the world I’m not scared of anybody.”

Flores tried breaking Santa Cruz’s high guard. And each time Flores came within Santa Cruz’s punching range, he got tapped with hooks and jabs to the head. Flores also found out early that it was wise to in trying to match firepower with Santa Cruz.

Through four, it was apparent Santa Cruz was the far superior, more-skilled fighter. They kept constantly engaging in a tight circle, with Santa Cruz carefully stalking, talking calculating risks but nothing too risky.

In the eighth round, after numerous warnings, referee Tony Weeks finally had enough to Flores (24-3, 12 KOs) and took a point for excessive holding.

It was difficult to watch.

Flores was too timid to engage, and Santa Cruz was content on sitting back, and not sitting down on his punches.

In the ninth, Santa Cruz dropped down to land a left body shot on Flores, who ran away there was anything close to danger. Weeks momentarily stopped the action, if that’s what you wanted to call it, when Flores hit Santa Cruz below the belt.

Then they engaged again in a cautious dance.

Santa Cruz closed the ninth strong, though he was little marked up in his face.

The final bell was greeted with an exhaustive cheer that it was over.

“It was a good fight and I showed I belong at this level,” Flores said. “I just went 12 rounds with Leo Santa Cruz. It’s not an accomplishment in itself but I slowed down his pace. Like I said before, it’s not only about throwing punches, but it’s about ring IQ and I showed I have it.

“It was a close fight and I didn’t think he was landing too much. He was busy but he wasn’t landing too many shots. I landed cleaner harder shots but he was just busier. I want to go back down to 126 pounds. I felt good at this weight, but I think I’ll hurt guys more at featherweight.”