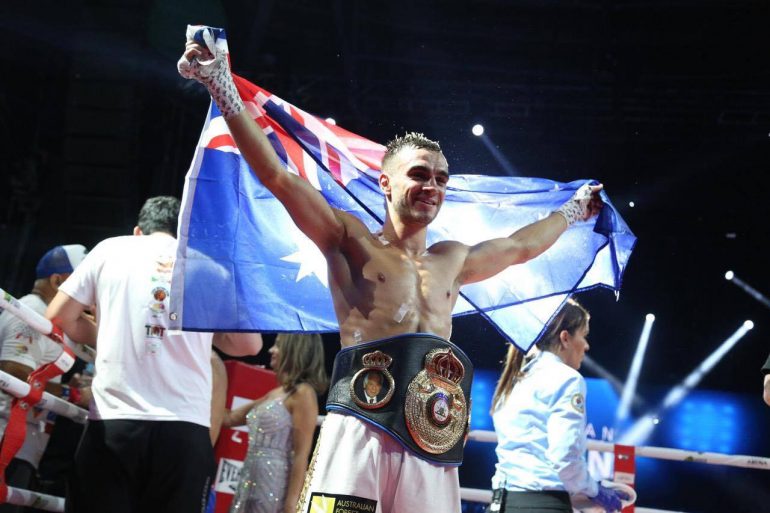 Andrew Moloney had to survive the toughest round of his pro career in the fifth, but pulled through it to defeat Elton Dharry by ninth round stoppage on Friday.

The win at the Margaret Court Arena in Melbourne, Australia earns the local favorite Moloney the “interim” WBA junior bantamweight title, which would seemingly convey with it mandatory status for WBA titleholder Kal Yafai.

Midway through the fifth, Moloney ducked right into an uppercut from his Brooklyn-based Guyanan foe. Moloney’s knee touched the canvas but referee Ferlin Marsh of New Zealand did not call a knockdown. Instead, Moloney absorbed a series of follow-up punches and held on to wait out the round. He rebounded strongly in the sixth as Dharry’s eye deteriorated into a swollen, bloodied mess. Even as his field of vision disappeared, Dharry remained dangerous, landing hard counter right hands whenever Moloney became over-aggressive.

Moloney for the most part was able to stick to his jab and remain in control, and in the eighth had a strong round, landing several right hands flush on the face of Dharry, as Dharry held his right hand high to protect the left eye. The fight was waived off as the ninth round began, with the doctor ruling that Dharry could no longer see.

“Bring on Yafai, I’ve been chasing him for a long time now,” said Moloney. “Let’s make it happen.”

Tony Tolj, who manages Andrew and his twin brother Jason, said they’re waiting to see what comes of unification talks with Yafai and WBC/RING champion Juan Francisco Estrada, but that Andrew would be next in line afterwards for Yafai.

“Andrew has an unbelievable motor,” said Tolj. “The level of fitness along with unmatched will to win would not allow him any other result other than victory.”

Told adds that the Moloney brothers, who signed with Top Rank earlier this year, would be fighting in the U.S. in early 2020 on one of Top Rank’s cards.

Jason Moloney (20-1, 17 KOs) also earned a victory in his fight earlier in the night, knocking out Dixon Flores (16-7-3, 5 KOs) at 1:26 of round two. Moloney, who gave Emmanuel Rodriguez all he could handle in a split-decision loss for the IBF bantamweight title 13 months ago, has now won three straight.

The fights were streamed live in the United States by ESPN+.