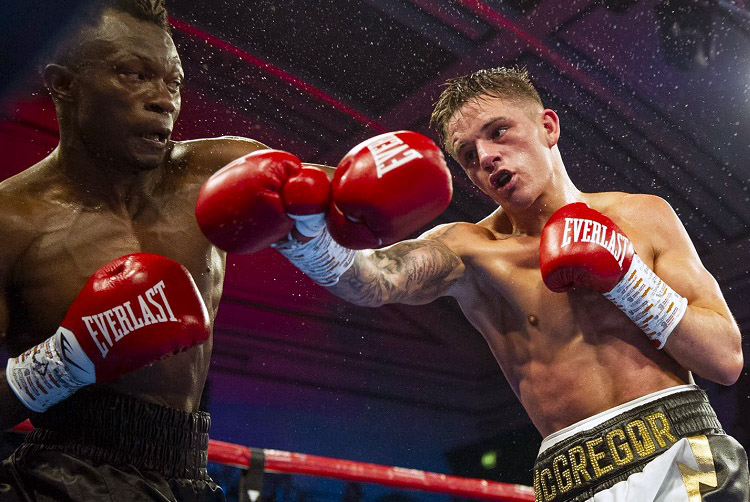 Editor’s Note: This feature was originally published in the October 2019 issue of Ring Magazine.

From a young age, Scottish bantamweight Lee McGregor was involved in sports. But he enjoyed soccer while it was his older brother, Connor (not to be confused with MMA star Conor McGregor), who boxed.

“My dad was a big boxing fan and used to watch it on the TV in the Scott Harrison (who held the WBO featherweight title twice between 2002-2006) days,” McGregor told The Ring. “That was my first sort of memory of boxing, and then I started to get involved myself a few years after that.

“I wasn’t watching and going to the gym; I was having a mess about in the house with my brother, and my dad would get us up on the pads. It wasn’t until a few years later we went up to Clovenstone Amateur Boxing Club. I just messed about like a young boy.”

Initially, McGregor was a bit shy and unsure of boxing due to a skin disorder, psoriasis. After a while, he decided to give boxing a go.

“I kept thinking about going back up to the boxing club and had my first amateur fight in May 2012,” said the 22-year-old. “I was 15. And it kind of went off from there.”

At first, he was known as “Connor’s younger brother.” But then things really took off.

“After 10 fights, people started to take notice, and I got my own name,” he said. “After 11 fights, I won the Scottish Open championships, and in my 12th fight I won the GB Open championship; I boxed my now-teammate Sunny Edwards in the finals. I was a raw novice. It was crazy. I was flying.”

While he found solitude in boxing, life was difficult outside the ring. In a year from hell, four family members passed away, including his mother and grandfather, who heavily influenced his boxing career. It was then that he and his brother began to find their paths.

McGregor threw himself into boxing and was part of the hugely successful team GB set up in Sheffield, England, and was selected to represent Scotland at the AIBA Youth World Championships in Sofia, Bulgaria, in 2014.

As well as domestic success, he did well internationally. He fought at the 2017 World Championships in Hamburg, Germany, losing to eventual silver medalist Duke Ragan in the second round.

The experience shaped the next part of his career.

“The World Championships were huge,” he said. “I’d only had about 40 fights going away to this tournament, and the guys I’m competing against are like Olympians and Olympic medalists, world champions with 200, 300 amateur fights.”

McGregor didn’t want to wait until 2020 for the Olympics and switched to the professional ranks in November 2017. His progression in the pro ranks was swift. In just his fifth outing, in October 2018, he won the Commonwealth title.

“I just think I was proving I was ready,” he said. “And if you’re proving you’re ready to do it and sparring 10, 12 rounds in the gym and you’re carrying it on into fight nights and looking good and blasting people away … In my first couple of fights I knocked guys out in the first and second round, and I needed stepping up.

“I was sparring lightweights and junior welterweights in the gym and more than holding my own. I feel like my team knew I was ready for being stepped up. My mentality is I want to face the best and get to the top as quick as I can.”

After initially signing with Barry McGuigan’s Cyclone Promotions, McGregor recently realigned himself with MTK Global and is back in Sheffield under Grant Smith’s watch. He defended his title for the first time in a grudge match with fellow Scotsman Scott Allan and is due to return in September in preparation for a clash with another countryman, Ukashir Farooq, who holds the British title. The plan is for them to meet by the end of the year.

‘My mentality is I want to face the best and get to the top as quick as I can.’

“As a kid I’ve dreamed about (being) British and Commonwealth champion,” said McGregor (7-0, 6 knockouts). “It sounds crazy, because I’m one or two fights from being that. It’s already coming true.”

His ambitions don’t end there, however. McGregor’s appearance in a six-rounder on the Naoya Inoue-Emmanuel Rodriguez World Boxing Super Series undercard in May helped serve as further motivation.

“I think Inoue is very, very special,” he explained. “I believe by the time I get to world level, he will be elsewhere, probably unifying in another weight class, because he’s that special and he’s that good, and that’s where he’s going to get his challenges – at the weights above. But it did whet my appetite.

“The Paul Butlers and Jason Moloneys, they’re the kind of guys I believe I’m not far away from. I think I’d give Butler and Moloney a fight now. I’m maybe a couple of fights away. I want to push on. 2020 will be the year I will become world champion.”

He’s not getting carried away, though.

“I’ve got a lot of work to do,” said McGregor. “Kash Farooq is no mug, and whoever wins that fight between us won’t be far away from European and world title opportunities.”

In the meantime, he’s reconnecting with his first passion through his success in the boxing ring.

“I’m a Hearts (soccer team in Edinburgh) supporter, and they’re backing me very well,” said McGregor. “I’m getting on the [field] parading my belts – it’s really helping my publicity and growing my fan base.

“My dream would be Tynecastle (stadium), but as long as the whole city was behind me, I wouldn’t care where it is. I want the whole of the country to support me, not just the half of Edinburgh. I believe I’m going to bring very big, special nights to Scotland.”