Kudratillo Abdukakhorov: ‘I am excited to fight a former champion like Luis Collazo’ 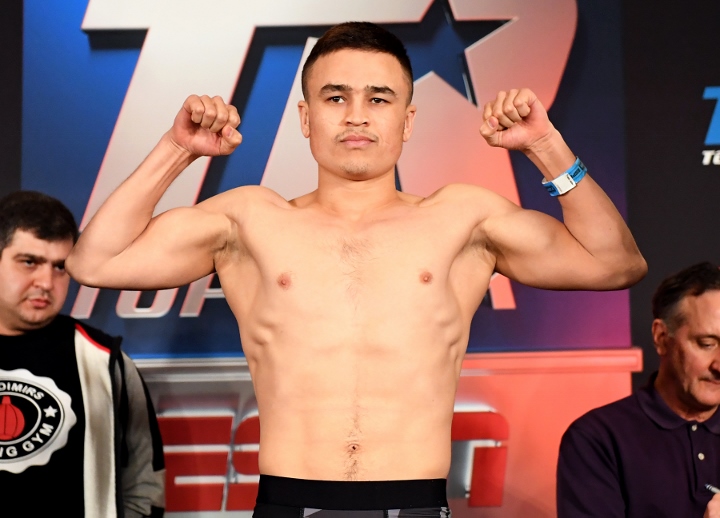 The fight will be shown live on ESPN and ESPN Deportes at 10 p.m. ET with other undercard bouts streaming on ESPN+ from 7 p.m. ET.

Abdukakhorov, who is rated No. 10 by The Ring at 147 pounds, won an IBF title eliminator, outpointing Keita Obara in March, but was happy to risk his mandatory position against the dangerous Collazo.

“I am excited to fight a former champion like Collazo,” Abdukakhorov (16-0, 9 knockouts) told The Ring through his trainer, Ilgar Aliev. “This is the next step for us. We want to fight Errol Spence, but first we have to beat Collazo.”

“It is a difficult fight, but it is the sort of fight Kudratillo needs,” said the Malaysian businessman, who brought big-time boxing back to Southeast Asia after a 40-year wait. “We could have fought someone easier, but when we spoke to Top Rank, we decided that it would help Kudratillo gain more experience against a clever veteran.

“We also believe this will increase Kudratillo’s profile in America. We are the mandatory to Spence, but we aren’t very well-known. This fight can hopefully go a long way to help change that. He will be seen on ESPN, that is amazing exposure and will help us move toward our goal of facing Errol Spence. Hopefully he makes a full recovery after the car accident.”

The 26-year-old Uzbek made his American debut earlier this year in Philadelphia and is pleased to be going back.

“It was nice to fight in a boxing town,” Abdukakhorov said. “I am looking forward to fighting there again. I want to win a world title, and this is another step on that path.

“I watched Spence against [Shawn] Porter, it was a great fight and I want the opportunity to face top fighters like that.”

Abdukakhorov’s return to “The City of Brotherly Love” will also give the young contender a chance to savor the local sights.

“I didn’t get to see the Rocky statue last time, but my manager says if I win we will go this time and he will buy me a Philly cheesesteak [laughs],” Abdukakhorov said.

“Huge implications on the line for both guys,” said Moretti. “I can’t pick a winner with any great confidence. Both guys are in great shape, and it’s as even as the main event between Beterbiev and Gvozdyk.

Collazo (39-7, 20 KOs) turned professional in 2000. The New Yorker won 24 of 25 fights before besting Jose Antonio Rivera for a welterweight title. He lost it in his second defense to Ricky Hatton, who won a close unanimous decision against him in May 2006. Since then Collazo has twice challenged for world titles but fell short. Now 38, the veteran southpaw has mixed with a slew of top 147-pounders including Shane Mosley (L UD 12), Andre Berto (L UD 10), Victor Ortiz (KO 2), Amir Khan (L UD 12) and Keith Thurman (L RTD 7). Collazo is currently on a three-fight win-streak.