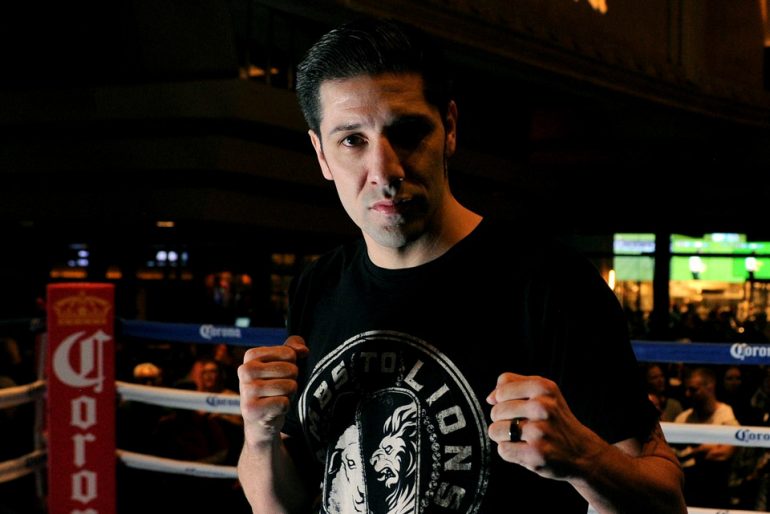 Battle-tested veterans John Molina Jr. (30-8, 24KOs) and Josesito Lopez (36-8, 19KOs) will lock horns this Saturday in a contest that looks like a can’t miss, all-action brawl on paper. Their 10-round welterweight fight will be part of the televised Errol Spence-Shawn Porter pay-per-view card distributed by Fox from Staples Center in downtown Los Angeles. Both Molina and Lopez are are eager to get back in the win column after losses earlier this year. The Ring caught up with Molina at his gym in Baldwin Park, California, as he wrapped up preparations for his bout with Lopez.

While many fighters would be doing no more than a light workout so close to fight night, Molina got in several rounds of heated sparring. To say he’s pumped for his showdown with Lopez would be an understatement. “Driving to the gym today I had a surge of energy; fight week is almost here,” he told The Ring. “This is an instant fight, just add water. I respect Jose. In fact we’re friends. I always knew that one day or another we would cross paths, and finally here it is. You have two guys that have earned their stripes in this brutal sport. It’s a Southern California brawl, the Mexican style. This is going to be a fun fight.”

Molina is also known as “The Gladiator,” and for good reason. He has consistently proven that he’ll face anyone and it seems that he can’t be in a bad fight. The same can be said about Lopez, known by fans as “The Riverside Rocky.” Together, both men have fought a who’s who of boxing stars, including Terence Crawford, Canelo Alvarez, Keith Thurman, Adrien Broner … and the list goes on. “If anyone’s resume compares to mine, it’s Jose,” Molina said. “(Fighting Lopez) is going to be like shadowboxing in a mirror. Me and Jose, we don’t say no to a fight.”

Considering the styles both men bring into the ring, most are expecting a war from the opening bell. While his trainer would prefer him to box, the taller and longer Molina admits it won’t be long before things turn into a brawl. “With me and Jose, I don’t think we know anything different,” he said. “(A brawl) is going to happen; just sit back and enjoy.”

The stakes couldn’t be higher for both fighters. Molina lost to former lightweight title holder Omar Figueroa in February, and Lopez to former unified welterweight titleholder Keith Thurman in January. Both men have eight losses on their record (three by stoppage), and a win on September 28 could spark one last run in the twilight of their careers. Although Molina has boxed professionally for 13 years, he promises that he still has plenty of gas left in the tank. “I’m proud of the career I’ve had. I came up from the dirt roads. I started boxing at 18,” he said.  “When the time is right, I’ll walk away with a smile on my face. I have no problems walking away. I have a beautiful family; I’ve done well in boxing. But I’m not thinking about the ‘R word.’ I’m not there yet.”

A couple of highly anticipated title bouts follow Molina-Lopez, as Anthony Dirrell defends his super middleweight title against former titleholder David Benavidez in the co-main, while Errol Spence and Shawn Porter unify their welterweight titles in the main event. Molina is looking forward to both matches. “Dirrell is a very formidable champion, but my personal belief is that Benavidez is the next big thing in boxing,” he said. “There’s a time and a place for everything, and this is his time.” When it comes to the main event, he feels it could go either way. “It’s an intriguing fight, because Porter is abnormally strong,” he said. “That’s a scary man to have in front of you, because he doesn’t want to lose. Errol Spence is a boxing savant, very technically sound, and I believe he can handle anything Porter shows him. But I would not be surprised if Shawn Porter pulled the upset.”