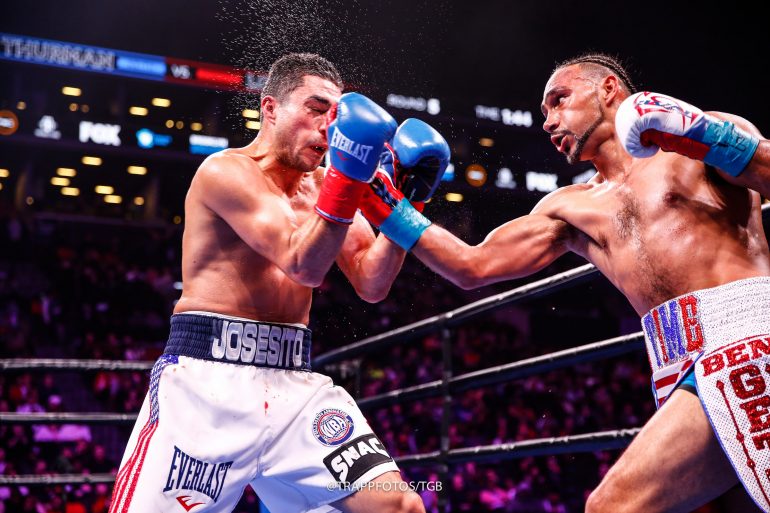 Josesito Lopez (left) gave Keith Thurman hell during the second half of their WBA welterweight title bout but the defending beltholder dished out his share of punishment. Photo by Stephanie Trapp/TGB Promotions
26
Jan
by Ryan Songalia

NEW YORK — It had been nearly two years since Keith Thurman had last been in a professional boxing ring.

On the shelf isn’t where he figured he’d be after his breakout win, a split decision over Danny Garcia. First he had his right elbow operated on, ending 2017 for him. Then an injury to his left hand canceled a 2018 return.

In the interim he got married in Nepal and watched as Errol Spence Jr. and his former foe Shawn Porter rose to prominence in the division.

After twelve hard rounds, Thurman (29-0, 22 knockouts) emerged bruised but unbowed, outpointing Josesito Lopez (36-8, 19 KOs) by majority decision to retain the WBA welterweight title on Saturday in front of an announced crowd of 9,623 at the Barclays Center in Brooklyn, N.Y.

No one knew exactly what to expect when the bell rang for his fight Saturday night against Josesito Lopez. After a tentative opening round, Thurman reminded people why they call him “One Time”. 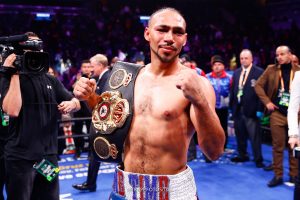 With about thirty seconds remaining in the second, Thurman stepped back from the taller Lopez and cranked a counter left hook, putting Lopez on the canvas. It looked like we could get an early finish, it turned out to be just a wakeup call for Lopez.

Lopez, though never a world beater, showed why he was known as “The Riverside Rocky”, standing up to the heavy uppercuts and wide swinging rights to land his own shots around the guard of Thurman.

Then things went sideways. After failing to get rid of Lopez inside of six rounds, the way Marcos Maidana, Andre Berto and Canelo Alvarez did, Lopez found his moment, torquing Thurman’s head with a left hook, then knocking his head upright with a right hand. Thurman was in big trouble for the remainder of the round, drawing referee Steve Willis in close for a look as Lopez looked for the finish.

“He had me buzzed and shaken up in the seventh round, but I tried to stay on the outside away. I was a little off in my prediction of how long his arms were. He lunged in and was really willing to commit to the knockout,” said Thurman.

Thurman survived, much in part because Lopez appeared to gas himself out. Thurman recovered behind his jab in round eight, just as he had when Luis Collazo hurt him with a body in round five of their 2015 fight.

Thurman resumed throwing heavy bombs in round nine, landing combinations and periodically touching the body with his left as he circled around the ring.

Lopez walked through the heavy offensive outbursts from Thurman, forcing the titleholder to move more than usual. Thurman appeared exhausted at the final bell but raised his hands victoriously.

“I was disappointed I couldn’t finish him and get him out of there,” said Lopez, 34. “If he thinks he’s the best welterweight out there, then I want two through five lined up for me.”

Thurman excused the performance, saying he didn’t expect to be at his best following the layoff, but took aim at his promotional company’s biggest recent signing, Manny Pacquiao. Thurman says he wants to face the 40-year-old living legend, who made his PBC debut with a unanimous decision over Adrien Broner last week, and wouldn’t mind if he had to travel to the Philippines to do so.

“I would most likely definitely take the Manny Pacquiao fight this year,” said Thurman regarding the fighter who holds the “regular” version of his WBA belt. “I’m ready to fight wherever Pacquiao wants it.”