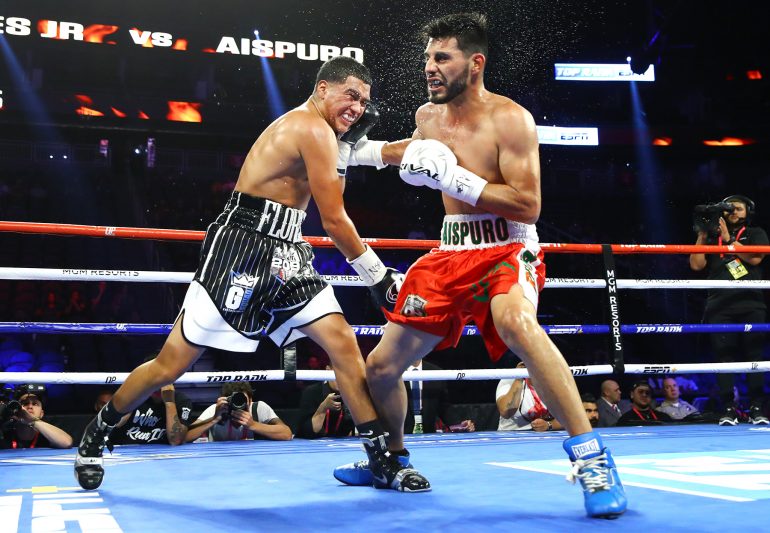 Flashy Flores fired in left hooks to the body and head from the opening round, but Aispuro was defiant.

Gabriel finished round two strongly, letting his hands go. Handspeed was often the difference through the remainder of the fight, but he didn’t put a dent in Aispuro, who is now 12-9-2 (8 KOs). Scores were 60-54 across the board. Jay Nady refereed. 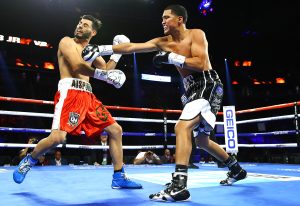 “It’s always a thrill to fight here in Las Vegas,” Flores said. “This has been a great year for me as I continue to develop as a fighter. I’ll be back soon.”

Isaac took a big right hand in round one and Cancun’s Hernandez was happy to trade leather.

Lowe, who’d battled with the scales, was marking up in the second. The work was untidy but rough in the third and fourth.

Lowe relaxed more in the fifth, even briefly turning southpaw. He was a more elusive target and he had his moments in the fifth. Hernandez landed a left hook in round six and Lowe smothered him for a while, in a bid to subdue his output. There wasn’t much in it.

They embraced at the bell, but Hernandez shook his head in disappointment when the cards were read out, 77-75 (twice) and 78-74 to Lowe.

Iskander Kharsan, a Kazakh based in Henderson, kicked things off with Fresno southpaw Isidro Ochoa, who was unable to continue after round five in their super-bantamweight eight-rounder.

Kharsan, now 7-0 (6 KOs), was busy with straight shots and having success with the right hand. He was trying to get Ochoa to throw by feinting his left and then trying to land his right once Ochoa committed.

It worked only on occasion but he was the man in the ascendency.

In round five, however, the pace of the fight changed. A short left hook felled Ochoa, who spent the rest of the round under real pressure. Referee Robert Hoyle accepted the surrender.

Ochoa’s corner would not allow him out for round six and Kharsan celebrated wildly with a lap of honor. Ochoa drops to 7-1 (3 KOs). 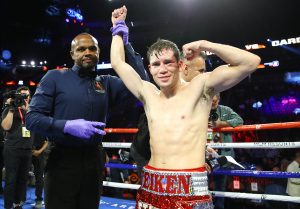 Cuadras won their super-flyweight clash on a majority decision, with one scorecard marking their contest a draw, but two cards scoring to the veteran who moves to 39-3-1 (27 KOs). Tijuana’s Cardenas falls to 17-5 (14 KOs).