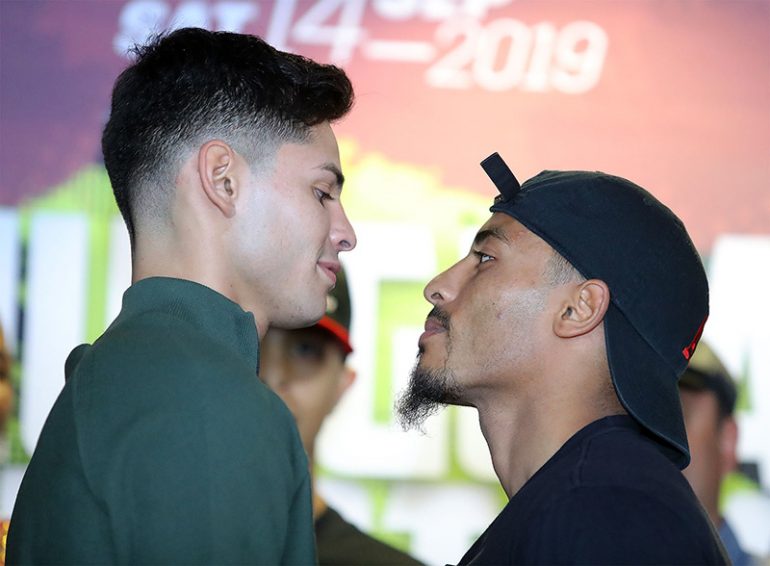 Ryan Garcia has the edge in size and speed against Avery Sparrow, but the Philly fighter says his proven heart and skill will be the difference in their lightweight matchup. Photo by Tom Hogan-Hoganphotos / Golden Boy
12
Sep
by Doug Fischer

CARSON, California – The Ring had hoped to speak to Avery Sparrow the week of his anticipated fight with popular lightweight standout Ryan Garcia on Saturday, but it wasn’t meant to be.

The talented junior lightweight from Philadelphia skipped the media workouts on Wednesday and declared that he wasn’t doing interviews following the final press conference on Thursday.

Obviously, Sparrow’s got his game face on for what is without question the most important fight of his five-year professional career, the co-featured bout of a DAZN-streamed card at the Dignity Health Sports Park in Carson, California on Mexican Independence Day weekend.

A victory over Garcia (18-0, 15 KOs), The Ring’s No. 10-rated lightweight and a 21-year-old social media heartthrob with close to 3.5 million Instagram followers, will get Sparrow ranked in the top 10 of at least two sanctioning organizations (the Southern Californian is rated No. 5 by the WBA; No. 6 by the WBO) and instantly propel him into general fan consciousness. So, the stakes are high and Sparrow (10-1, 3 KOs) is trying to go tunnel vision with his mental focus.

Still, it would have been nice to get his thoughts just days away from his big opportunity. He’s generally a thoughtful interview, but maybe he expressed everything he needed to say about the fight and Garcia with his harshly critical comments behind the podium on Thursday. Those words elicited a brief rebuttal from Garcia, which sparked an intense and chatty stare down, which garnered significant social media attention. (Garcia’s Instagram post of the face-off attracted more than 1 million views and nearly 8,000 comments by 8:00 p.m. Pacific Time.)

Talks cheap! He was saying he’s going to knock me out, that I’m soft! One way to find out and that’s in the ring 🥊 Never back down from anything let’s do this!! He says he’s from philly east coast well I’m from the west coast and ima show him how we do it out here 👑 Watch on @dazn_usa please don’t miss this one ☝️#ryangarcia #boxing #boxeo

With all due respect to Saturday’s main event (the Jaime Munguia-Patrick Allotey WBO 154-pound title bout), their scheduled 10-round lightweight bout is the matchup on the Golden Boy Promotions card that’s moving the needle – in part because of Garcia’s social media following but also due to Sparrow’s dismissive attitude aimed at the IG star.

“Ryan Garcia is a talented young fighter but to me he’s yet to be in tough, yet to be proven,” Avery said during his turn at the podium on Thursday. “I fought his last opponent, Jose Lopez, in 2017. So, he’s getting guys that I already beat.

“I really don’t see him as a tough fight. He comes in, only has one plan, to knock everybody out. When he went the distance with Carlos Morales and Jayson Velez he really had a tough time. He really likes to hold, he doesn’t have no inside game. There’s a lot of things that Ryan has to prove, there’s not a lot for me to prove. I’ve been in tough, I’ve been on the B-side a lot of times, I fought heavier guys, I’ve been hurt in fights, I got up. We know I’m build (Russell) Peltz tough.

“But the first 15, 16 fights when you’re signed to an elite promotional company are favored for you to win, so this fight right here is an opportunity to see if Ryan Garcia really is who he says he is.

“I really believe he bit off more than he can chew. Come Saturday the world is going to see that Ryan Garcia is over with. The Instagram and all the fame and all that, it doesn’t win fights. Hard work, talent, dedication, ring smarts, the ability to adjust on the fly – we saw he can’t adjust, it’s been proven, we saw that I been dropped, get up and win fights, we saw that I fought bigger guys and boxed them, we saw that I fought bigger guys and banged them – so, I’ve showed everything. Ryan Garcia has a lot to prove and he’s going to have to prove it because I’m coming to fight. Ryan Garcia is done.”

Garcia didn’t take kindly to Sparrow’s insinuation that he lacked skill or experience, or that his IG following is some kind of weakness.

“He claims he has a lot of experience; he has 11 fights. I don’t know how much experience you can have with that,” Garcia said. “I was in the amateurs maybe even longer than him, so I have just as much experience.

“But I’ve been working hard in the gym to get better each and every time. In every camp I just strive to get better and better. I know there’s a lot of pressure on me, a lot of hype.

“And a lot of people like to focus on my Instagram. I don’t know why. You don’t hear me boast about it. Everybody else talks about it. It connects me with my fans. Why wouldn’t I want to connect with the people that support me?”

Good point made by “King Ry.” A sell-out crowd is expected at 7,500-seat Dignity Sports Health Park (formerly StubHub Center) on Saturday, and many of those tickets will be bought by Garcia’s fans.

Avery doesn’t have a legion of teenyboppers supporting him, but he’s managed by singer-songwriter Usher (who’s got more than 12 million followers on Twitter) and he’s advised by hall-of-fame promoter Russell Peltz, a Philadelphia bastion who’s forgotten more about boxing than most will ever learn. Not too shabby.

This year marks Peltz’s 50th in the business, so he’s seen his share of upsets on the road.

“From Bennie Briscoe knocking out Tony Mundine in Paris in 1974 to Jason Sosa stopping Javier Fortuna in Beijing in 2016, there’s no bigger thrill than witnessing your guy beat the favorite,” Peltz said.

“We had to take this fight. I can’t get the top 130 pounders to fight Avery. I’ve literally begged promoters – Top Rank, the PBC, Eddie Hearn, anybody – to give us a fight.”

Golden Boy was the first to roll the dice against Sparrow, who partnered with Peltz in March 2017 and has gone 6-0 against tough opposition, including veteran Hank Lundy in his last bout.

“I haven’t given him cupcakes and he doesn’t want that,” said Peltz. “When (Golden Boy matchmaker) Robert Diaz calls me I don’t say hello, the first thing I always say is ‘We’ll take the fight.’

“Garcia is big and he’s got a lot of speed. He’s not an easy fight but everybody can be beat. Is Avery his toughest opponent? He probably is style-wise. That’s what makes the fight interesting. I think it’s the most interesting matchup of the weekend.”

The risk that Garcia and Sparrow are taking is refreshing to the old-school promoter.

“When fighters call me up and tell me they want a tune-up, I tell them to go to the auto shop,” Peltz said. “We’re in a business that’s entirely tune-ups and showcase fights. We know this is a tough fight, but what’s wrong with a tough fight?”