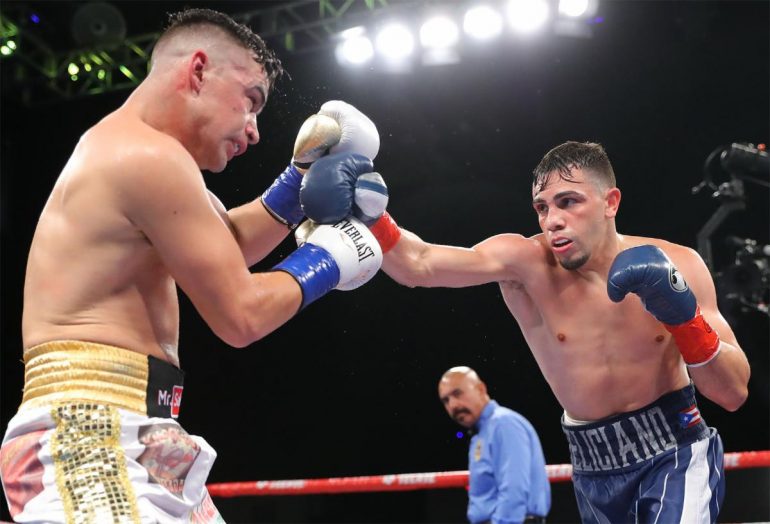 Junior welterweight prospect Luis Feliciano outboxed Genaro Gamez over 10 rounds to win by unanimous decision Thursday night at the Fantasy Springs Resort Casino in Indio. The official scores were 98-92, 98-92, and 99-91

The fight was a clash of unbeaten fighters with the winner taking a step forward towards contender status. Although he had to deal with a few instances of adversity, Feliciano was the more-effective fighter throughout most of the fight.

Gamez was the aggressor from the opening bell, but Feliciano turned the tide in his favor. A left hook to the body of Gamez in the third was a warning sign, and Feliciano began to impose his will.

Undaunted, Gamez did his best work in Round 5, initiating exchanges and walking Feliciano down, mixing up his attack and landing to head and body. The rally was short-lived as Feliciano responded with sharper punches, especially to the mid-section.

It looked as though Feliciano scored a knockdown in Round 7 with a left hook to the body. However, replays showed the punch land slightly below Gamez’s belt-line and it was correctly ruled a low by referee Ray Corona.

Gamez, who is trained and managed by Robert Garcia, didn’t mount much of a rally in the final three rounds and was content to throw one punch at a time.

With the victory, Feliciano improves to 13-0 (9 knockouts).

“It was a very tough fight,” said Feliciano, who is trained by long-time Southern California trainer Ben Lira. “I knew he was going to be tough coming in. We came prepared. We did our job and got the win.”

Feliciano, who is of Puerto-Rican descent and now lives and trains in the Los Angeles area, hopes the win will earn him more lucrative opportunities.

“I want to go from prospect level to contender,” he said. “I believe this (victory) will catapult me.”

In a clash of unbeaten welterweight prospects, Blair Cobbs overcame a knockdown to stop Steve Villalobos in the ninth round of a scheduled 10.

The 29-year-old Cobbs, who lives and trains in Las Vegas, has gained a great deal of attention for his charisma. He has had a breakthrough year thus far, defeating Ferdinand Kerobyan on Mar. 21 and, most recently, stopping Robert Redmond, Jr. in his last bout on June 21.

The southpaw Cobbs (12-0-1, 8 KOs) chose to stand and trade in the center in the ring. He found success, mainly with shots to the head.

With one minute gone in Round 6, Villalobos hurt Cobbs with a right cross and floored him with a follow-up assault. Cobbs did not appear hurt and fought back bravely.

Sensing that Villalobos had exerted a lot of energy, Cobbs mounted an attack of his own in Round 7, stunning the Mexican-American towards the end of the session. Suddenly Villalobos’ punch output dropped dramatically.

Cobbs dropped Villalobos within the opening minute of Round 9, and the stricken fighter rose on unsteady legs. A right uppercut to the chin caused him to fall against the ropes following a delayed reaction. Referee Eddie Hernandez had seen enough and stopped the bout at 1:20.

“I could’ve just run though him,” said Cobbs after the fight. “I wanted to place my shots and break him down.”

“I have a lot of respect for Steve Villalobos. He’s a great fighter and warrior.”

Villalobos, who grew up in Indio and resides in Mount Vernon, Washington, drops to 11-1-1 (9 KOs).

The southpaw Rivera (8-4-1, 4 KOs) was the more-effective fighter throughout, connecting with several lead or counter right hooks. As the bout progressed, Acevedo’s confidence and punch output began to diminish.

Rivera, who trains in the LA area, was the busier and more-confident fighter during the final round and clearly assumed he’d done enough to win. To his disappointment, one judge scored the bout 59-55 for Acevedo, another gave him the same tally and the final judge scored 57-57.