The education of Rowan Campbell continues on Friday 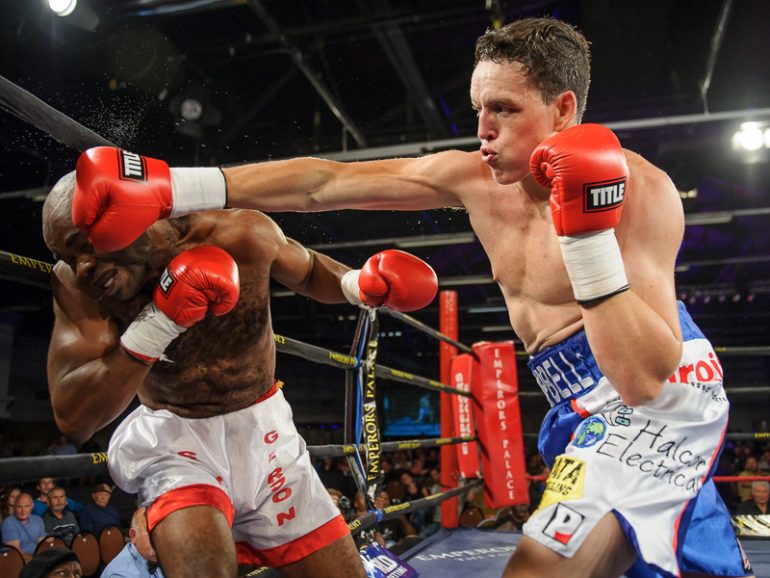 With no amateur experience, Campbell has built an unbeaten record he hopes will lead to becoming a contender at 168 pounds.

Campbell will face Patrick Mukala Friday night at Emperors Palace in Kempton Park, South Africa. The 12-round bout will headline a card promoted by Rodney Berman.

Campbell (10-0, 6 knockouts), who resides in nearby Johannesburg, most recently fought on May 10, defeating Yanga Phetani by unanimous decision over 10 rounds. Campbell has displayed more of his improved skill-set over his last three bouts, all of which have gone the distance.

Berman has been impressed with what Campbell has done thus far but believes Mukala could generate buzz with a solid victory over him.

“This (fight) features two outstanding young fighters,” Berman told The Ring on Tuesday. “Campbell is the South African champ and undefeated, an incredible feat having had no amateur experience at all. However Mukala is himself a very exciting talent with only one defeat on points against Ryno Liebenburg, in a fight regarded as being too early in his career. Campbell-Mukala will be an outstanding contest.”

The 25-year-old Mukala (11-1-1, 10 KOs), who is originally from the Democratic Republic of Congo and now resides in Johannesburg, has not fought since his draw against Emmanuel Anim on September 21 of last year. Mukala is unbeaten in his last three bouts since his loss to Liebenburg in October of 2017.

In the co-feature, junior middleweight prospect Roarke Knapp will square off against Alexandr Zhuravskiy of Kazakhstan in a 10-round bout.

Knapp (8-0-1, 7 KOs), who resides in the Johannesburg suburb of Edenvale, knocked out Wynand Mulder in his most recent bout on May 10. The 21-year-old Knapp has won back-to-back bouts since his draw against fringe contender Eric Kapia on May 6 of last year.

Berman also high expectations on Knapp, who made his pro debut a month after his 18th birthday.

“Knapp’s encounter against Zhuravskiy will be something of a measuring stick, as Knapp comes against an opponent who recently fought to a draw against Boyd Allen,” said Berman. “I am predicting a great future for Knapp, who is one of the most talented fighters I have seen in South Africa in many years.”

Zhuravskiy’s (13-5-1, 11 KOs) majority draw against Allen took place on June 8, also in Kempton Park. Zhuravskiy is winless in his last four bouts, all against unbeaten fighters.

In his most recent bout on June 8, Malajika knocked out Arnel Lubisi in the opening round of a clash between unbeaten South African fighters. Friday will mark Malajika’s first scheduled 10-round bout.

“Ricardo is one of the most decorated amateur fighters in South Africa,” said Berman. “He is also an outstanding prospect and, although having had only a handful of fights in the professional ranks, is far more mature than his record would suggest. Malajika is another great future prospect.”

Gloss has won five of his last six bouts since losing his pro debut to Lubisi in April of 2017.