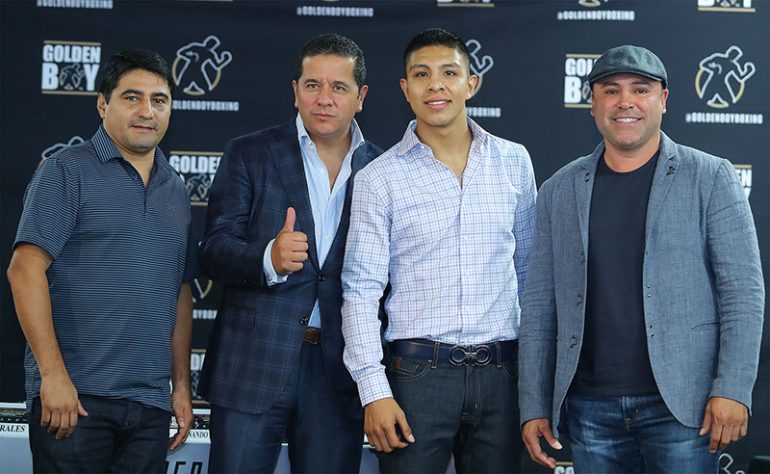 When Jaime Munguia was born in 1996, Erik Morales had already amassed 22 wins in what ended up being a Canastota-bound career.

Munguia does not have much memory of El Terrible’s Hall of Fame heights other than videos available on YouTube, but he knows that the boxing icon who helped make “Mexican Style” become a thing can help steer him to a star breakthrough.

The work-in-progress Munguia recently requested the tutelage of Morales as his new trainer. Although there’s a 30-year age gap between them, they share similarities of surviving rough Tijuana neighborhoods en route to become world champions by the age of 21.

The newly formed duo will take the main stage as the headline attraction on Mexican Independence Weekend when Munguia (33-0, 26 knockouts) takes on the little-known Patrick Allotey (40-3, 30 knockouts) from Ghana on September 14 at the Dignity Health Sports Park in Carson, California. 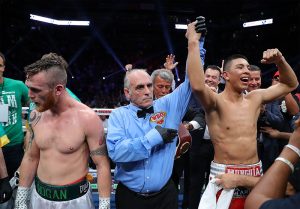 Munguia had his hand raised after 12 rounds with Dennis Hogan but many felt the Irish challenger deserved the nod. Photo / HoganPhotos

It’s a step down in competition from the last time Munguia stepped in the ring against Dennis Hogan in Mexico. After a strong showing in 2018 featuring five wins and taking the WBO world title, he struggled this April against Hogan on his way to a controversial majority decision win as disputed scorecards and lack of drug testing were called into question.

The subpar performance led to a change in coaches. Out stepped Robert Alcazar, who for years was Oscar De La Hoya’s lead trainer, and in stepped Morales, a master in the ring but a novice as a coach.

“More than anything, Erik has helped me think in the ring and to not get over anxious and keep my composure. That’s the most I’ve learned from him,” Munguia told The Ring Magazine. “When you train, you have to do it correctly, professionally and concentrate.”

Since retiring in 2012, Morales has mostly trained his brother Ivan Morales, as well as Jessie Vargas for the Timothy Bradley fight and worked with Mexican national fighters like the unheralded Mario “Dragoncito” Rodriguez.

He sees Munguia as a raw fighter with a lot of desire and will.

“It reminds me of when I was younger,” Morales said. “He has been improving … I assure you that the Munguia you know will be different, but will also deliver the same explosive style he has. We are showing him and guiding him.”

Morales said he will tune-up Munguia’s overall arsenal, and work on having him keep his hands up as well as punch better from the outside.

Golden Boy matchmaker Robert Diaz is particularly interested in seeing what kind of impact Morales will have on the 22-year-old fighter. 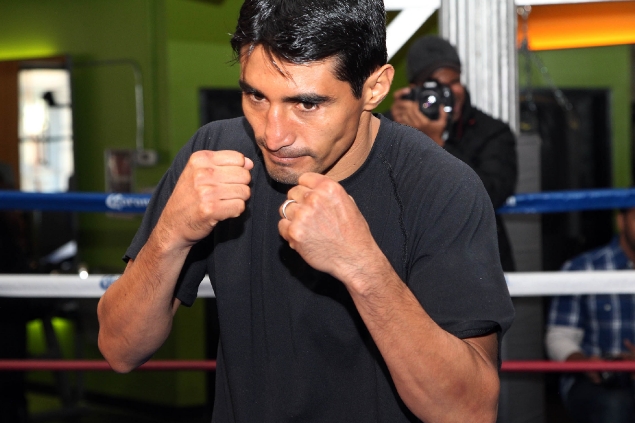 Erik Morales during a workout prior to the final bout of his hall-of-fame career.

“This fight will be important to see how the chemistry works in the ring,” said Diaz. “We’ve seen it in the past where legendary fighters don’t become great trainers because they want to teach you how they once fought. I think with Erik, we’ll see an exception, because he understands the game very well. He knows when to box and when to slug, and that’s what Jaime needs.”

Diaz agreed that the Munguia-Hogan clash was a close fight and could have gone either way.

“The best way to answer that is what Jaime did, and make a change as he did with a trainer,” said Diaz. “As long as he’s eager to learn, he’ll pick up a lot. Erik can’t teach what Jaime already has, and that’s balls and heart.”

Munguia’s fight with Allotey will be the fighter’s last as a super welterweight because his six-foot frame is now having difficulties cutting down in weight. It largely was a reason why a fight could not get made with Vargas, who insisted a bout take place at 154 instead of the preferred 156 from Munguia’s camp.

“Erik brings a lot to the table,” said Fernando Beltran, president of Zanfer Promotions. “Jaime is thinking a lot more now, and to me that’s a very important improvement he’s making.”

Munguia was previously training in Tinseltown, and now, he’s moved back home in Tijuana as he hopes Morales will help him make the leap.

The plan is to look good on the Mexican holiday that De La Hoya and Alvarez helped make become a boxing tradition. By the end of the year, Munguia wants to fight again and make his middleweight debut.

Once the skillset is reshaped and refined, Golden Boy will look very closely at a collision course pitting Munguia against Canelo.

Manouk Akopyan has been a member of the Boxing Writers Assn. of America since 2011 and has written for the Los Angeles Times, USA Today, the Guardian and Philadelphia Inquirer. He can reached on Twitter, Instagram and YouTube at @ManoukAkopyan or via email at [email protected].