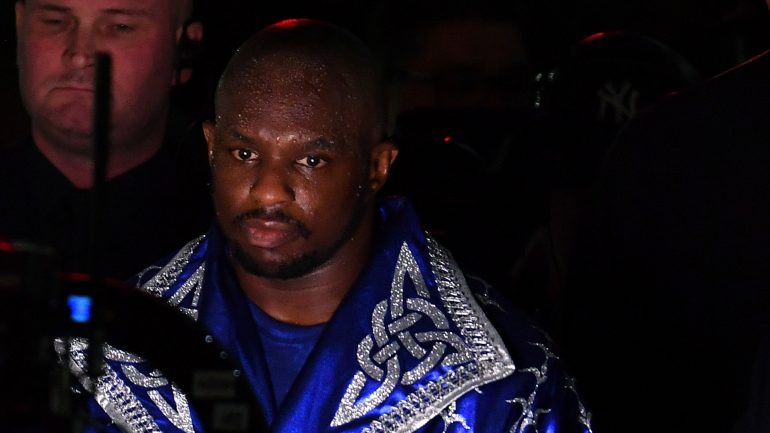 The WBC announced Tuesday that they are “provisionally suspending” Dillian Whyte from recognition as their interim heavyweight champion, which conveys with it mandatory challenger status, due to the adverse finding in his A sample submitted to UK Anti-Doping for his fight against Oscar Rivas on July 20 at the O2 Arena in Greenwich, England.

The unanimous decision looked to set up his long-awaited mandatory title shot at WBC heavyweight titleholder Deontay Wilder before this controversy put that on hold.

“The WBC has notified Mr. Whyte and his team of the WBC’s suspension, and that it will afford Mr. Whyte the opportunity to present its position to the WBC at an investigative hearing which will take place at a place and time to be announced in the near future,” read the statement.

“Throughout its investigation and hearing, the WBC will afford Mr. Whyte and his team the opportunity to present any available information and materials, and any exculpatory evidence they might deem appropriate.”

According to reporter Thomas Hauser, Whyte’s test came back positive for two metabolites of Dianabol, an anabolic steroid. Despite the finding coming back three days before the fight, the bout proceeded as planned without the Rivas camp being informed.

Whyte’s promoter Eddie Hearn has claimed that the 31-year-old fighter was “cleared” to fight by the British Boxing Board of Control, plus UKAD and Voluntary Anti-Doping Agency, which had also been involved with pre-fight testing.

“A process was adhered to. A hearing was had. He was confirmed and cleared to take part in this fight,” Hearn told IFL TV.

Whyte took to Twitter on July 26 to address the initial reports.

“I am so disappointed with the rubbish that has been said about me over the last few days,” said Whyte, who has in the past accused the WBC of “protecting” Wilder from his mandatory defense. “I have lawyers dealing with it and I have been told that I can’t talk about it for good legal reasons. I was cleared to fight and I won that fight fair and square.”