GERVONTA DAVIS TREATS HIS HOMETOWN BEFORE HIS BIGGER MISSION BEGINS 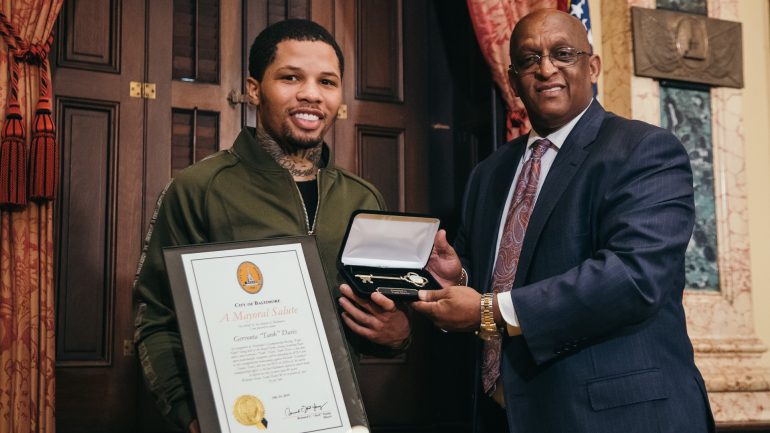 Gervonta Davis tells the story of how he sheepishly peeked out from behind the curtains to look at the crowd in Brooklyn’s Barclays Center. It was the night he beat Jose Pedraza. Though, just before his ring walk, “Tank” openly admits something went through his head: “Am I ready for this?”

It didn’t take long for Davis to answer—and the rest of the boxing world to find out—when Davis splashed the previously undefeated IBF super featherweight titlist in seven.

Since then, Davis has left no doubt he belongs among the 130-pound elite. The only problem Davis has had is getting out of his own way. Two fights after beating Pedraza, he lost discipline, then lost the IBF strap on the scales before stopping Francisco Fonseca for the first time in an uneven performance.

The fight holds some historical significance for Davis, who becomes the first Baltimore native to make a homecoming defense in nearly 80 years, since featherweight champ Harry Jeffra defended his title by beating Spider Armstrong in July 1940 at Carlin’s Park. That went the distance, when they were fighting 15 rounds.

Davis, and many others, don’t see Nunez lasting very long in this modern title defense. Tank carries a 12-fight stoppage streak into the fight. He’s been given the key to city. He’s met the mayor, seemingly shaken every hand and taken a picture with everyone in Baltimore. Davis has even sounded like he’s running for mayor himself.

The fact that the fight is a home showcase holds no great burden to Tank.

“To be honest, I don’t really have too many people who are asking me for tickets, not yet,” Davis said during a conference call in the build-up for the fight. “But, I’m just coming home to fight on a big stage means a lot. I started in Baltimore, and I’m coming back home. I’m actually training at home, too. So I always believe, I’ll be able to reach a lot of kids that way and it will mean more than doing it. So that same kid that was coming up or just looking at me coming back home is – I’ve been in that position before.

“I always wanted to show love, and be able to give back like a couple of fighters there for me. I was never the fighter that they didn’t show love. As Floyd (Mayweather), Lamont Peterson, Anthony Peterson, a lot of guys, even Danny Garcia. When Danny fought Zab (Judah), he called me up to spar him. So I always wanted to get back and just show them that anything is possible.  I came from the same projects.  I came from the same block. July the 27th is going to be historic. A lot of kids are going and their eyes are going to be open that night.”

Davis says he would like to unify the 130-pound division. IBF junior lightweight champion Tevin Farmer will also be defending his belt on the same night. But Tank didn’t want to get drawn into naming names. His focus, he says, is on Nunez.

Though that was met with more than few cackles in the background.

“This is personal for me,” Nunez said.  “I do want beat Gervonta Davis. I had a great showing in Baltimore, although it’s his hometown. I want to bring the championship back to Panama, not only for myself but for my family.  We’ve prepared very well physically and also technically for this fight. So you’re going to watch a great fight coming from me.

“I’ve had no problems in training camp. So there’s no excuses. We’ve matured as a boxer. My record states that. So everything has been worked on double for this great fight.

“I’m going to use the style that’s best for me as a conditioned fighter. We’re looking at trying to hit him, and when we hit him with the hardest punches we can, knowing how he’s also a strong boxer. So that’s our game plan. You’ll see the style when we get there, that it’s going to be the best one for my form of boxing.

“I definitely don’t think this is going to go the full rounds because as I said before, the high percentage we have of knockouts. So somebody is definitely going down.”

Someone may have had to hold up Davis from falling over laughing.

“(Nunez) said he isn’t going to go the distance, I’m scared,” said Davis, dismissively. “So, I need to hurry up to get a good workout in. It’s going down for real. I’m a little nervous now.”