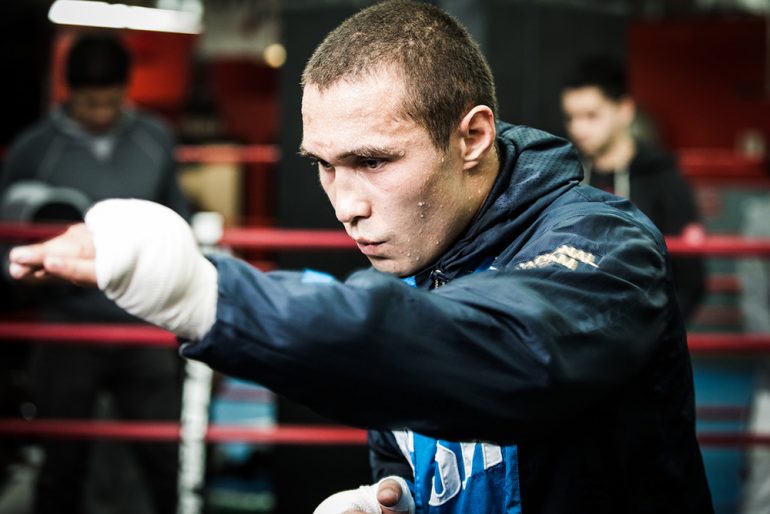 Former IBF junior welterweight titleholder Sergey Lipinets will meet perennial contender John Molina in a scheduled 12-round welterweight clash on the undercard of Keith Thurman-Manny Pacquiao at the MGM Grand in Las Vegas on Saturday.

Lipinets, who is rated No. 10 by The Ring at 147 pounds, will be fighting at the weight for the third time since losing his world title to Mikey Garcia in March 2017.

The 30-year-old Russian edged fringe contender Erick Bone and then impressively stopped Lamont Peterson in 10 rounds. The Molina fight, at least on paper, looks to be an all-action tear-up.

“Fighting John is something that was always on the table and it almost felt inevitable,” Lipinets (15-1, 11 knockouts) told The Ring through manager Alex Vaysfeld. “I think that the timing of that fight is right.

“Stylistically we match up pretty good. I’m sure fans will get their money’s worth.”

Lipinets appreciates what Molina brings to the table for their encounter.

“John is a big puncher and he was trained by the best in the game throughout his career,” said the former titleholder in relation to Molina having worked with acclaimed coach Joe Goossen. “That means he does most things well and it will be up to me to poke some holes in his game.”

“John is a very dangerous fighter and I know it first-hand, having trained him for most of his major fights,” said Goossen. “We are aware of how we need to approach that battle. Lipinets is an exceptional athlete that I don’t need to tell twice what to do. Stylistically it’s a very intriguing match.”

Molina (30-8, 24 KOs) turned professional in 2006. This blood and guts warrior has twice challenged for world titles, falling short against Antonio De Marco at lightweight and Terence Crawford at junior welterweight. His never-say-die attitude and comeback capacity makes him a dangerous opponent for anyone.

Lipinets is excited to be appearing on such a huge promotion and has his eyes on the winner.

“The main event is awesome and being on the undercard of Manny [Pacquiao] versus Keith [Thurman] is incredible,” he said. “I hope that if all goes according to plan that I get the chance to fight the winner.”

As manager Vaysfeld knows this is a huge opportunity for his client to get a leg up towards a more significant fight in the future.

“It’s a very entertaining scrap between two guys that are willing and able,” he said. “Sergey has been training hard and has excellent sparring partners.

“Stepping in to the 147-pound division was just natural transformation for Sergey and we believe he’ll do well and become champion at that weight class. Joe Goossen is a perfect match for his style and it’s a match made in heaven.”

The bout will be broadcast live on Fox in the U.S. and on ITV Box Office in the U.K.