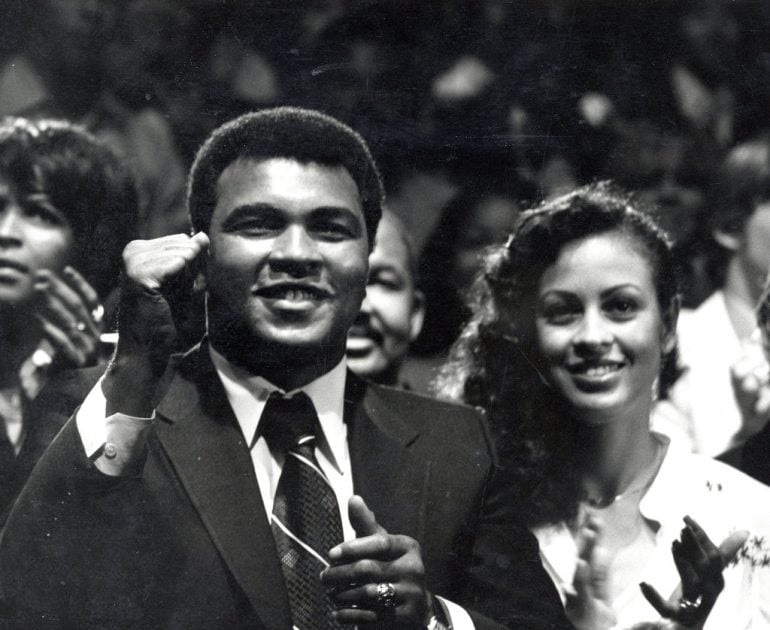 Ring announcer Champ Clark made it official at the Superdome in New Orleans, Louisiana on September 15, 1978. Exactly seven months after being outpointed by the gap-toothed Leon Spinks in Las Vegas, Ali had taken revenge, claiming a wide unanimous decision over the 1976 Olympic gold medalist to become the first man in history to win the heavyweight championship of the world three times.

In truth, that result – and the championship that came with it – flattered to deceive.

Spinks, who entered the first Ali bout with a record of 6-0-1 (5 knockouts), didn’t belong in the ring with his idol. Three or four years earlier, the St. Louis native would have struggled to win a round against Ali and going the distance would have been considered a near-miracle. The fact that Ali had needed 30 rounds to settle the argument with a novice pro like Spinks was a clear indication of how far the 36-year-old veteran had slipped.

As promised before the rematch, Ali retired, making his decision official at a press conference in Los Angeles on June 27, 1979: “I’m not gonna stand up and do like many people I see going out [Ali pretends to be in tears], ‘It’s been so good to me. . . I hate to leave…’ I’m happy to be gettin’ out… I mean it’s been hell. That’s why I’m so lucky to be here today – able to make these boasts – and now forever champion. To get away clean; to get in and get out, and be able to say, I’m the first black man to win and get out clean.”

In September 1979 Ali was honored at a huge retirement celebration at the Forum in LA. Among those in attendance were Richard Pryor, Lou Rawls, Chevy Chase, Jon Voight and Jane Fonda. Comedian Billy Crystal would perform his now famous 15 Rounds with Muhammad Ali sketch, during which he would imitate both “The Greatest” and legendary ABC broadcaster Howard Cosell. The show closed with Ali being joined by arguably the greatest pound-for-pound fighter of all time, Sugar Ray Robinson (see video). His reverence for the great ex-champion obvious, Ali paid tribute to him by dancing around the stage and threw in “The Shuffle” as a bonus. The crowd loved it and bid their hero a tearful farewell.

However, despite now showing clear signs of boxing damage, Ali couldn’t stay away. Money was a factor and the great ex-champion missed the adulation.

Less than six months after his retirement, there were already rumblings of a return to the ring. John Tate had won the vacant WBA title by scoring a 15-round decision over Gerrie Coetzee in Pretoria, South Africa. Incidentally, Coetzee earned that shot by stopping Leon Spinks in a single round in Monte Carlo. Tate was initially considered as Ali’s comeback opponent but dutifully dismissed when he was knocked out by Mike Weaver in March 1980.

We all know the rest. Ali was humiliated over 10 rounds by friend, former sparring partner and future great Larry Holmes on Oct. 2, 1980. He didn’t come close to winning a round against the sharp-shooting WBC titleholder. Unbelievably, a barely intelligible Ali was allowed to fight Trevor Berbick the following year in an embarrassing promotion dubbed the “Drama in Bahama.” Why the Bahamas? Unlike prior world title outings in Manila, Zaire and Kuala Lumpur that were government funded, the Bahamas was chosen simply because Ali couldn’t obtain a boxing license in the United States. Berbick labored his way to a 10-round decision over an overweight and dreadfully slow Ali on Dec. 11, 1981. Finally, it was over.

Dr. Ferdie Pacheco, Ali’s former physician, had walked away years earlier when Ali sustained a dreadful pounding from Earnie Shavers in a successful title defense in September 1977. Complete with demonstrable medical evidence, Pacheco warned Ali and several people close to him that his body was breaking up and that retirement was more necessity than choice. He was completely ignored but years later Ali, now in full decline, told him, “You was right!”

“He had said it to me many times,” Pacheco told British newspaper The Mirror shortly after Ali’s passing. “The unnecessary punches he took wouldn’t have stopped the Parkinson’s. But I think it would not have compounded it as it has.

“Who knows, Ali may not have passed away now if he’d stopped when I asked. He may not have been trapped in a shell like he was for so many years.”

As with Joe Louis and Robinson before him, Ali’s exit from the sport was undignified and there was a terrible price to pay during permanent retirement. However, those glorious nights in the ring, the transcendent moments outside of it, the enormous influence Ali had on millions of people the world over – that is his legacy. And it will never be matched.

What a fighter, what a man he was.