Andy Ruiz appears on Kimmel, says OK to Joshua rematch in US, UK or even Mexico 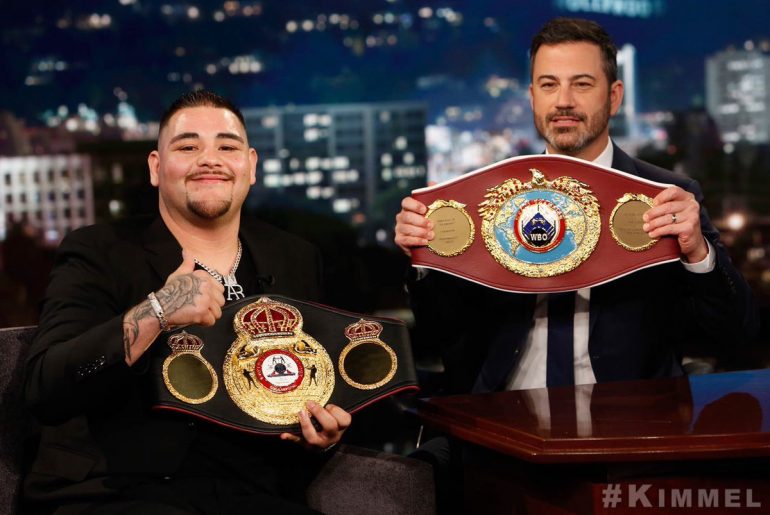 A few days after scoring a massive upset to win three of the heavyweight championship belts, Andy Ruiz Jr. continued his victory tour with an appearance on “Jimmy Kimmel Live!” Tuesday.

Ruiz (33-1, 22 knockouts) had been a virtual unknown heading into the fight against Anthony Joshua at Madison Square Garden, but the seventh round technical knockout win and an appearance on Kimmel’s popular late night show on ABC has helped give the 29-year-old from Imperial, California significant exposure.

With two of his belts on his arm, Ruiz held his own with the joke-cracking Kimmel as Kimmel asked why there weren’t more Mexican heavyweights like him.

“I don’t think their parents are giving them too many rice and beans like my mom did,” said Ruiz, the first fighter of Mexican descent to hold heavyweight belts.

Kimmel then pulled out a photo of Ruiz as a grinning child no older than 12 holding a bottle of tequila, and Ruiz doesn’t seem to recall if it belonged to him. “Then I guess it was probably yours,” Kimmel responded.

Turning the subject to boxing, Kimmel asked if Ruiz, as a significant underdog, ever had any doubts about winning the fight. “Of course I didn’t,” said Ruiz. “Ever since all the training that we’ve been doing since my last fight, fighting Alexander Dimitrenko on April 20, we were really prepared for this fight. I kept telling everybody in all the interviews that I’m gonna win this fight. Everybody kept doubting me.”

Kimmel made a joke about Jarrell Miller, the unbeaten New Yorker who was originally scheduled to fight Joshua, before multiple drug fails in pre-fight tests caused him to be removed from the headliner.

“Have you called and thanked him for doing all the drugs?,” Kimmel said.

“I have, we have a good relationship with Jarrell Miller, he wanted me to win this fight,” was Ruiz’s response.

(READ: Andy Ruiz proves that round is also a shape in heavyweight boxing)

The news of the day was that Eddie Hearn, the promoter of Joshua, announced earlier that they would be exercising their rematch clause in November or December, with a venue to be announced at a later date.

Ruiz appeared eager for a second meeting, saying he’d be open to wherever it’s settled upon.

“Of course, if he wants the rematch I’ll give it to him. I’m willing to go over there,” Ruiz said, referring to the United Kingdom, where Joshua is from, “if they’re willing to come over here, we’re still in negotiations…”

Kimmell cautions him, saying he should keep in the U.S. because of how “shaky” boxing can be. Ruiz agrees, and adds Mexico to the list of places he’d like the fight to be.

Joshua released a video on Tuesday addressing the rematch, and mentioned “clauses” and the words “date” and “location” but it’s unclear if he’s referring to whether a date and location for a rematch were agreed upon beforehand.

“Congratulations to Andy Ruiz, he has six months to be heavyweight champion because the belts go in the air and he’s gonna have to defend his titles against myself.”

Ruiz also introduced his father and brother in the front row, and said that both of them and his mother won nearly $10,000 betting on him to win. “I feel so proud of my Rocky Mexicano,” said Andy Ruiz Sr.

“The main thing is to stay busy, stay active, I want to get in better shape,” added Andy Ruiz Jr. “I want to look like a Mexican AJ, get those muscles in too.”

Kimmel has had a long history of bringing boxers on as guests, most notably with Manny Pacquiao, whom he walked to the ring for his 2015 mega-fight with Mayweather. Kimmel has also hosted Mike Tyson, Floyd Mayweather Jr., Oscar de la Hoya, and Yuri Foreman.