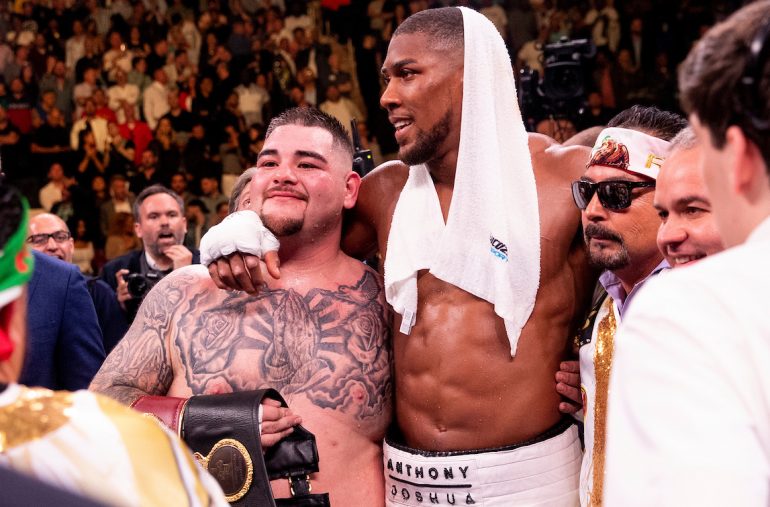 Eddie Hearn, the promoter of Anthony Joshua, announced Tuesday afternoon that their side will execute the rematch clause to take on Andy Ruiz Jr. a second time.

Ruiz, listed as high as a 15-to-1 underdog, stunned the boxing world last Saturday when he got off the canvas to knock the previously unbeaten Joshua to the canvas four times to win by seventh round technical knockout at Madison Square Garden in New York City.

Hearn tweeted out that he had met with Joshua, trainer Robert McCracken, and the rest of Joshua’s team to discuss their options.

“After meetings with AJ, Rob Mc and the management team in NY, we have today triggered the contracted rematch clause with Andy Ruiz Jnr. The fight will take place in Nov/Dec at a venue to be confirmed shortly,” tweeted Hearn.

After meetings with AJ, Rob Mc and the management team in NY, we have today triggered the contracted rematch clause with Andy Ruiz Jnr. The fight will take place in Nov/Dec at a venue to be confirmed shortly.

An email to a spokesperson for Premier Boxing Champions, which handles Ruiz, was not immediately returned.

Joshua (22-1, 21 KOs) offered no excuses after the fight, even amid speculation that something had been off heading into the fight. Joshua said at the post-fight press conference that he wasn’t aware of a rematch clause, but when informed that there was one, said “I’m gonna beat him up.”

(READ: Andy Ruiz proves that round is also a shape in heavyweight boxing)

Ruiz (33-1, 22 KOs) of Imperial, California became the first ever champion of Mexican descent with the victory. The 29-year-old made it clear he would assert his position in future negotiations, telling AB Boxing News “I’m the champion, I call shots now,” adding that he preferred the rematch to be in New York or Los Angeles over Joshua’s backyard in the United Kingdom.

“I have the upper advantage right now…As long as we talk to Al Haymon and all my team, we’re gonna figure it out where. It really doesn’t matter where, as long as we get back in the ring and show the fans what they want to see.”