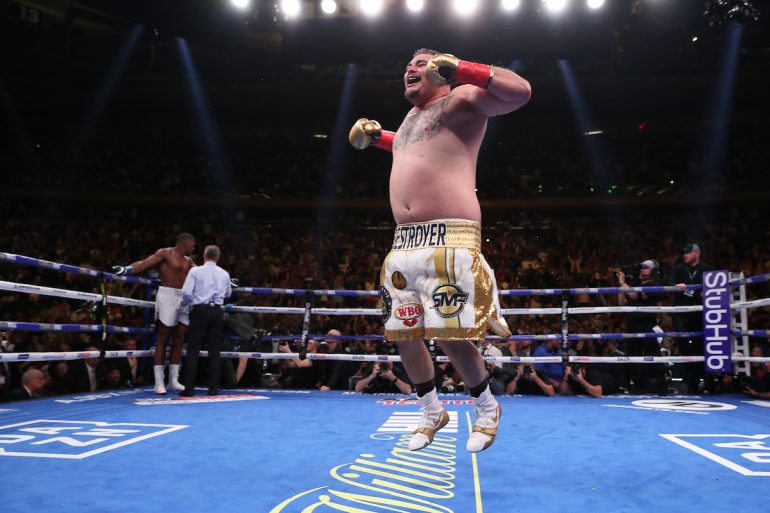 ROLLS ROYCE. Andy Ruiz survived a third round knockdown to dish out four of his own to Anthony Joshua to win three heavyweight belts. Photo by Ed Mulholland/Matchroom Boxing UK
02
Jun
by Ryan Songalia

NEW YORK — When Anthony Joshua handed Andy Ruiz Jr. his title belts at Thursday’s press conference to pose for photos, the expectation most had was that it was just a temporary loaner. Just as the perception 25 years ago was that unbeaten heavyweight champs don’t lose to men two decades their senior, so too was the thinking that chubby guys don’t knock out chiseled Adonises with three of the four major heavyweight belts.

But you can’t put a six-pack on your chin, and no amount of crunches can save you from a heavyweight punch to the jaw.

Instead of going back to London with Joshua, the belts were on display in front of Ruiz at the post-fight press conference. Ruiz sat atop the dais of the Madison Square Garden lobby wearing a Knicks jersey, belying his status as the new unified heavyweight champion of the world.

“I’m still pinching myself to see if this is real, man,” said Ruiz, who had been dismissed by many as a Mexican Butterbean.

“I wanted to prove everybody wrong, all the doubters, thinking that I was gonna lose in the third round, first round, I was looking at comments as well. But what do you know, I’m the first Mexican heavyweight champion of the world,” added Ruiz, who walked around the ring doling out D-Generation X crotch chops to the arena after the win, love handles and all.

His upset victory, some odds had him as long as a 15-1 underdog, is as real as it gets in boxing. The Watford, United Kingdom native Joshua, a 2012 Olympic gold medalist, brought the IBF, WBO and WBA belts across the Atlantic for his American debut, and had originally been set to face the likewise unbeaten Jarrell Miller. Miller was replaced after failing multiple pre-fight drug tests, and Ruiz, who had been on the comeback trail after a 2016 majority decision loss to Joseph Parker, took the fight on short notice.

Joshua and promoter Eddie Hearn of Matchroom Boxing had even admitted that Ruiz (33-1, 22 knockouts) was a more dangerous challenge than Miller, and that danger was apparent early in the bout. Ruiz, four inches shorter at 6’2”, looked more authoritative with his jab, doubling it up fluidly while Joshua pawed with little confidence to try and keep Ruiz at bay. But it was Joshua who struck first, dropping Ruiz with a quick uppercut-hook combination.

“When I was on the canvas I was just like ‘whoa, what the hell just happened?,’” said Ruiz, 29. “But I had to get him back, I think that’s when the Mexican blood in me and the Mexican warrior that I have in me, I had to return the favor,” said Ruiz.

Hearn said that nine out of ten times, an opponent would back up on the defensive and give an accomplished finisher like Joshua (22-1, 21 KOs) the opportunity to score the knockout. Instead, Ruiz stood his ground and looked for his opportunity to counter.

Ruiz beat the count, and absorbed a heavy right hand that would have knocked most others down again. He kept moving his head, and his hands, and landed a left and a right, followed by another left that landed high on the temple and caused Joshua’s legs to buckle. Another right hand put Joshua down, less than 20 seconds after Ruiz had gotten up. With ten seconds remaining in the third, Ruiz attacked again, landing a series of right hands that sent Joshua slumping along the ropes for the second knockdown.

Joshua survived, but he never truly recovered. Ruiz said he pressed in the fourth and fifth rounds, hoping that Joshua would attack so he could get an opportunity to counter, but took the initiative in the sixth round, hurting Joshua with body punches.

Fading badly, Joshua went for broke in the seventh, which opened him up to the overhand rights from Ruiz that put him down a third time. There was little left of Joshua when a couple of partially landed blows sent him down a fourth time, triggering the referee’s stoppage.

“[Joshua] hits really pretty hard man. I just needed to be smart in there. I thought that he opened up too much where I can counter him, but the speed got to him and we got this victory in a fashionable way,” said Ruiz. The victor and the defeated showed each other mutual respect afterwards, just as they had before the fight.

Ruiz had succeeded where Chris Arreola had fallen short three times, and where Manuel Ramos fell short in 1968 against Joe Frazier to become the first heavyweight champion of Mexican descent. He also completed what overweight folk hero “Two Ton” Tony Galento had attempted when he lost his heavyweight title bid to Joe Louis. 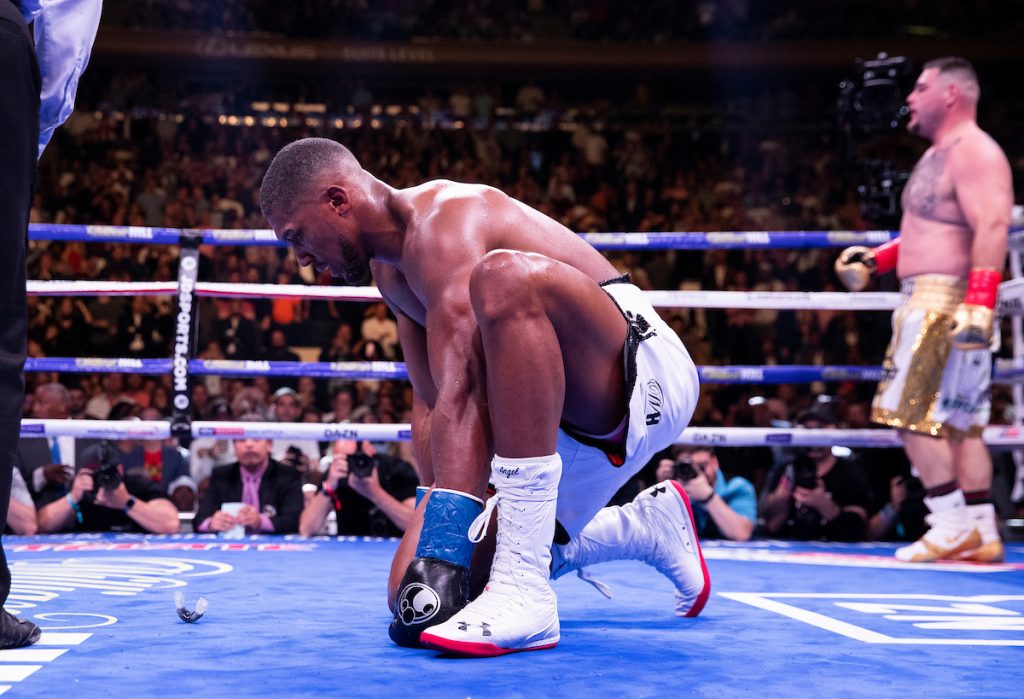 But none of that would have been possible if he had listened to detractors who criticized him for his body frame. Always one with plenty of meat on his bones, Ruiz once weighed 324 pounds in the amateurs, and turned pro at 297 pounds.

“At one moment I wanted to give up because I was listening to those doubters tell me you’re too big to be on the big stage, you’re too big to become a champion,” Ruiz said at the pre-fight press conference. Ruiz weighed 268 pounds for the fight, 21 pounds more than Joshua, and six pounds heavier than his prior fight a month ago against Alexander Dimitrenko. He says he added the weight to be stronger against Joshua.

His father first brought him to the boxing gym at age six to give the hyper kid a place to burn off energy, but it wasn’t something he took to immediately. “I got my ass beat up the first weekends that I was there. I didn’t want to go back but my dad kept saying ‘keep going, keep training, you’re gonna do something. You’re gonna beat those kids up that are beating you up.’”

Instead, Ruiz turned to the streets, running with a local gang in Imperial, California called Impe 13.

“I was a little gangster when I was young I had my head bald, hanging around with the wrong cliques,” said Ruiz. “I don’t want to say what things I would do but it was good and bad experience.

“I have a lot of friends that have died, that are still in jail right now, or they’re doing drugs and I see them at the corner and 7-Eleven. It’s hard but thanks to God he put me in this position and kept me out of that situation.”

Ruiz began to turn his life around when he became more serious about boxing at age 16, when his father brought him to Mexico City for Olympic qualifiers. He fell just short of qualifying for the Beijing Games in 2008, but the experience let him know there was something more for him in life than the streets.

“Boxing saved my life because it kept making me go back to train,” said Ruiz.

Ruiz’s wife and mother arrived at the press conference before he did, and could barely contain their joy.

“I’m proud of him, I love him, and he’s my life,” said his mother. His wife added that she was proud of him, and ready to go back home and celebrate.

Ruiz, sporting minimal damage on his face, addressed his mother from the podium afterwards.

“Mom, I love you and our lives are gonna change. We don’t have to struggle no more, thanks to God, everything happened for a reason, baby,” Ruiz said, bringing tears from his mother.

Andy Ruiz Jr. tells his mother that their lives will change and they’ll never have to struggle again #JoshuaRuiz pic.twitter.com/nHXhKFeWMH

It’s reported that Ruiz received around $7 million for this fight. Hearn confirmed that there is a rematch clause, and as champion, Ruiz is likely to receive the lion’s share of the purse split for the second meeting.

“I think Andy will fancy the rematch. He just stopped Anthony Joshua, so it’s not a situation where he’s going ‘I don’t think I can win the rematch.’ If he wins that rematch it really puts him in the position, in my opinion, as the golden goose of the division,” said Hearn.

“Anthony of course has got to accept that rematch, knowing him I’m almost certain that he will do that.” 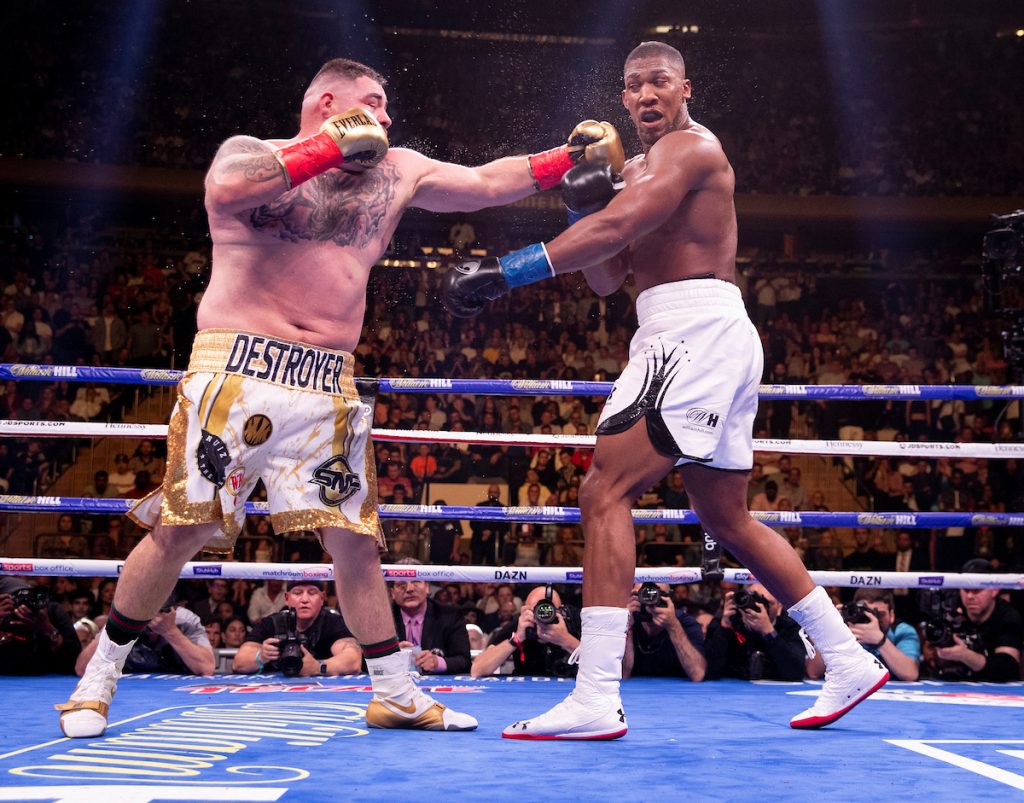 Ruiz’s upset win shifts the balance of power in the heavyweight division to Premier Boxing Champions, the U.S. based outfit run by Al Haymon, which now has all four major belts under its banner. The fourth belt, the WBC title, is held by Deontay Wilder, who has rematches with Luis Ortiz and Tyson Fury, the undefeated lineal champion, lined up for the next year.

Hearn says the next mandatory defense due is from the WBO, where Matchroom’s Dillian Whyte is rated no. 1, but he says he spoke with WBO president Francisco Valcarcel and is assured that the rematch would take priority over a mandatory. An IBF mandatory against Kubrat Pulev also looms, but Hearn remains confident that all of the titles will be at stake in a rematch.

Being a champion in the sport’s largest division brings with it privilege, and the Mexican fans are among the most passionate in the sport. He had been in talks with Snickers for a sponsorship deal since before the fight, and had intended to eat one of the candy bars before the New York Commission informed him that eating prior to the fight was barred. The marketing potential for Ruiz will be tested in the coming months as there’s no precedent to match him against, but long shots like Buster Douglas and James Braddock have traditionally done well for themselves.

Joshua had admitted beforehand that he had divided attention, with one eye also watching the Wilder mega-fight that now seems to be a moot issue. He said he still wanted to meet with reporters at that late hour to show his character.

“I come from a good family, but where I was at in life, I’ve dealt with more shit than this. I dealt with some real big losses and I bounced back. Life is a journey,” said Joshua, who expressed enthusiasm about a rematch. Joshua offered no excuses for the defeat.

“If I would have won tonight, there would have been nothing that went wrong, so I’m not gonna blame anything. I just lost tonight, Andy Ruiz is a better man tonight. I’ve gotta take that on the chin, and I’ve gotta roll with the punches.”

As Joshua himself said, this was Ruiz’s night, and Ruiz intends to extend that far into the future.

“This is not gonna be the only victory that I get, I’m not gonna let these belts go,” said Ruiz.