Callum Smith makes a point in his US debut, blows away Hassan N’Dam in 3 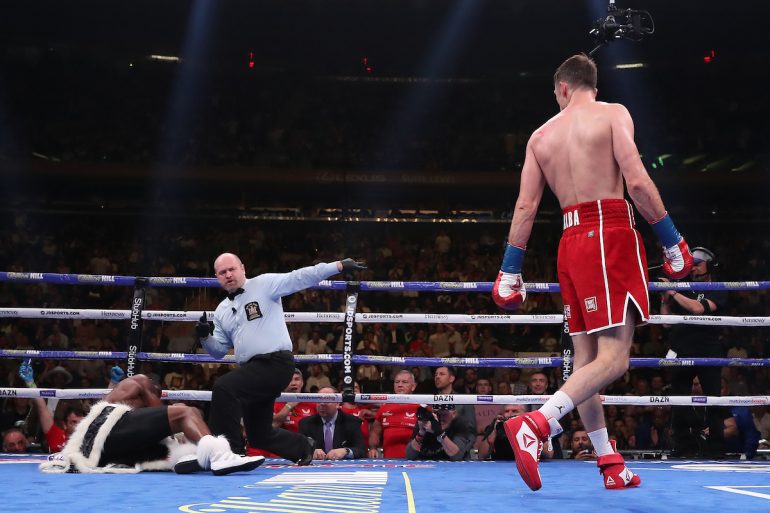 NEW YORK – Callum Smith bent his head back to get another look at his handiwork on the overhead Jumbotron.

What Smith saw was perfect, short and concussive.

He looked down, smiled and had his hand raised.

Yes, Smith’s victory seemed quick. It was that emphatic. But was it a strong selling point for Smith to be Canelo Alvarez’s next opponent?

Hassan N’dam N’jikam is no Alvarez. In fact, this was only the second time he fought in two years.

Smith and N’jikam were once sparring partners. That’s what this looked like. A sparring session that took a painful twist, with N’jikam lasting just 8 minutes, 52 seconds.

Smith (26-0, 19 knockouts) remained undefeated and retained the WBA and Ring Magazine super middleweight titles by stopping N’jikam (37-4, 21 KOs) at 2:56 of the third on the undercard of the Anthony Joshua-Andy Ruiz Jr. undercard at Madison Square Garden Saturday night on the DAZN.

“I think my audition went well,” Smith said. “Canelo is a special fighter. I will have to wait to see what he will do in September or if not September than see what he wants to do in May. He hasn’t said he is moving up to 168 yet but I believe I am the best fighter in the world at 168 so I am open to the challenge.

“But I don’t want to keep waiting for the fight that might never happen, I want to keep fighting great champions in the meantime and stay busy. There’s a lot of good fighters at 168 with or without Canelo so I want to text myself against them. If Canelo steps up in the future than it will happen.”

How Smith somehow manages to do it is anyone’s guess. The undefeated super middleweight from Liverpool, England, can squeeze 168 pounds into a 6-foot-3 frame and still remain strong.

It causes problems for anyone he fights, especially when they’re vertically challenged to combat his range, like the 5-11½ N’jikam.

Making his American debut along with Joshua, Smith made easy work of his former sparring partner.

When asked if his previous experience against N’Dam helped, “Not really, but I didn’t have to watch quite as much film on him,” Smith replied. “He is a good fighter and he has good movement. I knew if I was patient that I would get rid of him. It’s an honor to fight at Madison Square Garden, an iconic venue, to make my first title defense.”

In the first round, Smith used his size and pecked away at the smaller, shorter N’jikam. The fighter from Monte Carlo, Monaco, by way of Cameroon, did little in resistance. With less than 15 seconds left in the round, Smith uncorked a perfect left hook that splashed right on N’jikam’s face, sending him down to the canvas.

Referee Charlie Fitch ran over and immediately started the count, and N’jikam got up ion unsteady legs.

N’jikam was actually lucky to get out of the first round.

With 2:28 left in the second, N’jikam fell victim again to a vicious Smith left hook, dropped for the second time in two rounds.

N’jikam spent the rest of the round backing up and staying away. N’jikam did get up on far steadier legs the second time, though his survival mode switch kicked in early—and it seemed a matter of time before Smith would finish off N’jikam.

In the third, N’jikam took a few lunging punches at Smith. They had no effect. It was, however, the most active N’jikam was in the fight, up until that time. Smith hurt N’jikam with a right at about :42 left in the third, and for the third time in three rounds, N’jikam was down on the canvas again.

Smith nailed N’jikam on the chin with a perfect right.

This time, Fitch saw enough and wisely called it over at 2:56 of the third.

Smith wanted to put on a show. He did.

“I said that in the build up—and it’s no disrespect to Hassan N’Dam—but this was a fight I was expected to win so anything less than a great performance people would take notice,” Smith said. “I knew that a fan friendly, spectacular win would though. I knew it would get people talking about me. It was always about the performance just as much as the win.

“It felt good to be back in there. I took a few months longer than most new champions to get back in there but I showed that I am the best in the world. I plan to keep proving that over the next few years. I hope the fans enjoyed it and I hope to be back in the ring soon with bigger and better things.”

If not Alvarez, Smith does have options. Every other unification option would have issues with the towering Brit from Liverpool, England. There’s Anthony Dirrell (WBC), Caleb Plant (IBF) or fellow Brits Chris Eubank Jr. (IBO) and Billy Joe Saunders (WBO).

Plant has his first title defense in July against Mike Lee. Dirrell is coming off a 10th-round technical win over Avni Yildirim in which Dirrell suffered a cut over his left eye on an accidental clash of heads in the seventh round.

Smith doesn’t have to wait on Alvarez. He can keep it an all-England affair, with Eubank Jr. is coming off a decision victory over James DeGale in February and Saunders winning two weeks ago.

But will anyone be willing to risk it?