Gary Russell Jr: ‘I should be fighting Leo Santa Cruz instead of Kiko Martinez’ 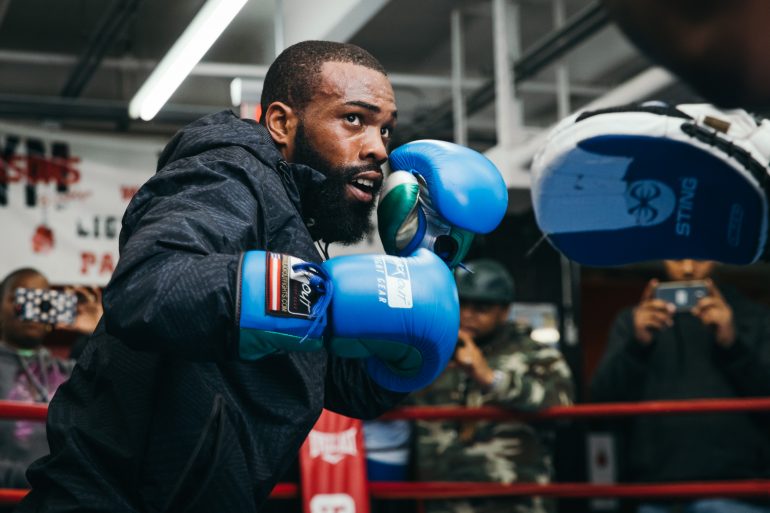 Photo by Amanda Westcott/SHOWTIME
15
May
by Anson Wainwright

Gary Russell Jr. will put his WBC featherweight title on the line against Kiko Martinez in chief support to his 2008 Olympic team mate Deontay Wilder’s WBC heavyweight title defense against Dominic Breazeale at the Barclays Center, Brooklyn on Saturday.

Russell, who is ranked No. 3 by The Ring at 126 pounds, had hoped for a bigger fight but had to settle for facing the rugged Spaniard.

“I have to compete against Kiko Martinez, I still have to defend my title so that’s what we’re gonna do. I think Kiko’s still going to try to be physically tough and he’s gonna be in shape but we’re ready for him.”

The 30-year-old southpaw, who had a seven week training camp at home in Washington D.C., appreciates what Martinez brings to the table but feels his overall game will be too much for the former IBF junior featherweight titlist.

“Kiko is a strong puncher, I think he’s gonna be physically strong, I think he’s gonna try his best,” said Russell. “You have to maintain a level of defense and distance no matter who you’re competing against, I think that’s one of the biggest things that he brings to the table.

“[I do] everything [better than him], my skillset, my handspeed, my punching power, my ring generalship. He wins fights because he’s bigger, stronger and in better shape than the guys he’s competing against. It’s not because he’s intellectual, it’s not because he’s the more educated fighter. I think I have the ability to make the necessary adjustments that’s going to make the difference in this fight.”

Martinez turned professional in 2004. He earned a reputation for his power and won the European 122-pound title on three occasions. That looked to be where he topped out. However, in 2013, he won the IBF strap by stunning Jhonatan Romero. Martinez (39-8-2, 28 KOs) made two defenses before losing to Carl Frampton. The 33-year-old has since moved up to featherweight and lost to Santa Cruz in a title fight in 2016. In his last fight he won the European 126-pound title to help procure this opportunity.

Since winning the WBC title in March 2015, Russell has made just three defenses. His last fight was  albeit an impressive win over mandatory challenger Joseph Diaz Jr. was a year ago.

Russell has often been met by derision from fans and media alike for his inactivity and for not facing better opposition. He is quick to distance himself from those comments.

“I’ll say that for the fans who don’t know what goes on behind the scenes, I can see why they’re probably frustrated, I’m equally frustrated but don’t talk about what you don’t know,” he said. “None of these guys we’re talking about that are supposed to be the better guys in my weight division, none of these guys are willing to compete against me.

The quick-fisted fighter sees parallels with Guillermo Rigondeaux, another avoided fighter from earlier in the decade.

“It’s very, very similar, when you’re extremely talented you’ve got to understand we get paid based upon our ability to be able to produce,” he explained. “When these guys get in the ring with me their chances to be able to produce is very, very slim. I’m looked at as the favorite being highly skilled and highly talented so a lot of these guys will avoid me and not fight me. I can’t make these guys get in the ring.”

Russell doesn’t know if he can coax any of the other big names at featherweight to meet him later this year if he turns back the challenge of Martinez but appears to have a potential plan.

“I’m not sure, I thought that the last three, four years now, that one of these guys would get in the ring with me,” he lamented. “It’s my job to do what’s best for me and my career.

His ideal scenario would play out something like this: “If I had it my way I’d compete against Leo Santa Cruz, I’ll defeat him, I’ll immediately move up in weight, challenge Berchelt, receive another world title in a different weight class. I’d love to get a unification with Gervonta ‘Tank’ Davis and I can see myself moving up again and I want to conclude my career with competing against Vasiliy Lomachenko again. Definitely full circle.”