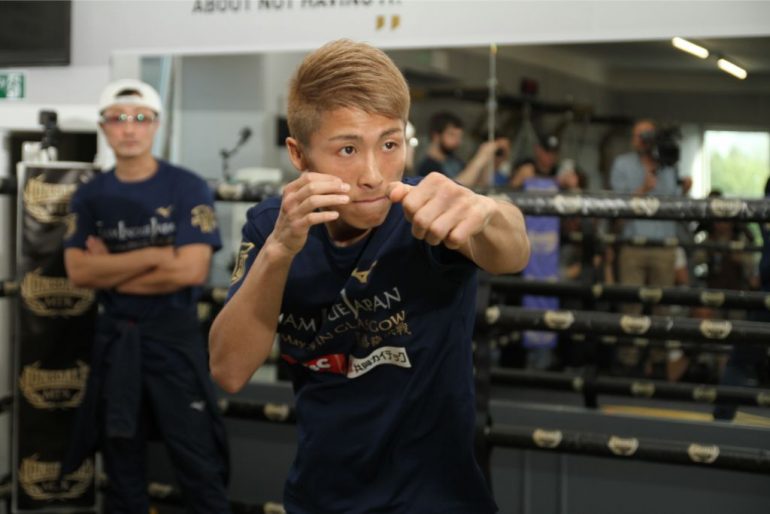 Photo by Shabba Shafiq/ SW33TSCIENCE Photography
15
May
by Tom Gray

HOLYTOWN, Scotland – It looks almost impossible to rock Naoya Inoue’s composure. The Japanese star’s exterior is so calm and pleasant, it’s sometimes difficult to remember that he is one of the most ferocious fighters in the world today.

On Saturday, Inoue, who is rated No. 1 by The Ring at 118 pounds, meets IBF bantamweight titleholder Emmanuel Rodriguez at the SSE Hydro in Glasgow. The pair will also contest the Ring championship which has been vacant since the retirement of Inoue’s countryman Shinsuke Yamanaka in 2018.

Simply put, it doesn’t get much bigger than this, but the aura of calm surrounding Inoue was visceral as he spoke with reporters following a short media workout at the MTK gym.

“Rodriguez has a great amateur record, general boxing skills and he can counterpunch,” Inoue told The Ring through Nobu Ikushima of Teiken Promotions.

“I know the expectations that people have of me (scoring a knockout), but I don’t plan to get tense and I will box my regular fight like I do in Japan. I’ll be professional. But you’ll see what’s going to happen when we get in the ring. I can’t tell you what’s going to happen right now, it’s a secret, but you will see.”

This elimination tournament format suits Inoue right down to the ground it seems and “The Monster” hopes to collect as much hardware as possible.

“I was so excited when I found out The Ring championship would be at stake,” said Inoue with a smile. “This has happened because the best are fighting the best in this tournament. We’re going to find out who the strongest is in this weight class.”

The only moment of drama at the media workouts occurred was an altercation between the Inoue and Rodriguez camps. Both teams had agreed to view each other’s workouts, but when Shingo Inoue, Naoya’s father and trainer, began recording the IBF titleholder’s session, things escalated quickly.

William Cruz, who has been coaching Rodriguez for the past several months, came out of the ring and pushed Shingo back several feet. It was uncalled for and the Japanese team were aghast by the incident, which occurred before Inoue was present.

“It was an open workout so naturally I was taking pictures,” said Shingo afterwards. “The guy came over and pushed me and that was very ungentlemanly.

“It’s the two fighters who actually train for this. We’re here to see who’s the better fighter, and outside of the ring nothing needs to be hostile. I could understand if I went into their camp and shot (pictures), but it’s an open workout and that’s what everyone is here for. I don’t think of those petty things and get emotional. It’s between Naoya and Rodriguez, that’s what they’re here for. Let them work it out.”

Cruz has since apologised for the incident via the WBSS, so all has been forgiven. The real drama will coalesce in the ring.

The winner of the Inoue-Rodriguez bout will face four-weight world champion, and reigning WBA titleholder, Nonito Donaire in the tournament final.