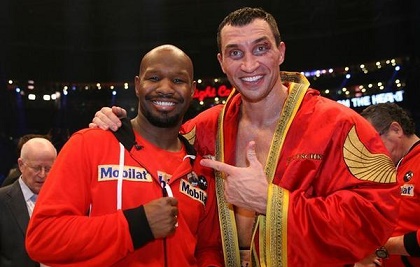 Johnathan Banks and Wladimir Klitschko
04
May
by Doug Fischer

LAS VEGAS – Gennadiy Golovkin’s new trainer will be Johnathon Banks, who coached Wladimir Klitschko’s final bouts and was an understudy of Emanuel Steward.

Banks is a former pro cruiserweight and heavyweight who was trained by Steward and often sparred with Klitschko when the former heavyweight champ was still coached by the hall-of-famer. When Steward passed away in 2012, Banks took over his mentor’s training duties with the Ukrainian star.

The announcement was made on Saturday at MGM Grand, the host hotel for tonight’s Canelo Alvarez-Daniel Jacobs middleweight championship.

Golovkin reiterated that there were no hard feelings with Sanchez, who didn’t take the break well and called his former prize pupil “greedy” in some interviews.

“I respect him,” Golovkin said of Sanchez. “He teach me a lot. I had a very nice, good experience with him, so like I said on my Instagram, ‘Thanks.'”

There was a lot of speculation as to who would replace Sanchez, given that Golovkin now lives in Southern California where many world-class trainers reside. Freddie Roach, Buddy McGirt, Robert Garcia, Joe Goossen and Joel Julio were names that bandied about on social media and in the minds of hardcore fans, some of whom speculated that part of GGG’s split with Sanchez was because he wanted to leave the high-altitude training environment of Big Bear, California.

However, Banks is training Golovkin in the mountain resort area. GGG’s a creature of habit when it comes to training, but he still brings a student’s mentality to the gym.

Banks, who also coaches undisputed women’s welterweight champ Cecilia Braekhus, has a cerebral approach to training and fight tactics, but he also brings Steward’s appreciation for offense and knockouts to his strategies, which Golovkin respects.

“He’s young but he has good experience, he’s old school,” said Golovkin. “I like old school. He learned from Emanuel Steward. I believe in this school of boxing.”

Golovkin, who owns a decision over Jacobs and a controversial draw and majority decision loss to Alvarez, faces unheralded Steve Rolls on June 8 in New York City. DAZN signed him to a multi-million-dollar deal with the plan of making return matches with Alvarez and/or Jacobs.

Banks believes Golovkin could have performed better vs. Alvarez.

That statement isn’t meant as a slight to Sanchez, Banks said, he just has a different perspective.

“We have two different visions,” he said. “I’m not saying mine is right and his is wrong. It’s just different.”

Golovkin has trained under Banks’ “different approach” for the past two weeks. Banks said Golovkin showed up to camp in good shape and believes they have enough time to properly prepare for Rolls.

When asked if Golovkin’s age, 37, factors into the way they train, Banks said it never crossed his mind because of their vigorous sessions.

“Mainly, I see the hunger and the passion,” he said. “There’s a lot of energy that comes with it. As long as that’s there, age is irrelevant.”